Is Lord Frost responsible for the chill descending over the trade talks?

The pivotal role of chief negotiator Lord Frost is coming under scrutiny as the trade talks limp towards the abyss. Johnson is not a details man and there are concerns Frost has not always conveyed a true picture of EU red lines to the PM. 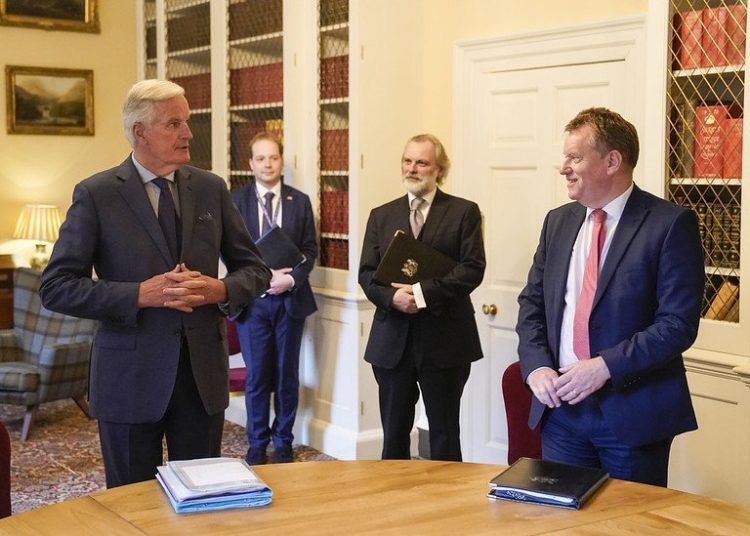 The role of our chief negotiator for the UK-EU trade talks, Lord Frost, is coming under renewed scrutiny. Johnson’s lack of interest in and understanding of the minutiae of free trade deals means Frost has become a far more important and pivotal figure than civil servant Ollie Robbins ever was under Mrs May.

Theresa May was a details person. She directed the negotiations, even side-lining “thick as mince” David Davis, who was ostensibly the Secretary of State for Brexit. In contrast, details-lite Johnson left it all to special advisers Cummings and Frost.

There are accusations now that Frost has not always perceived or conveyed the EU’s negotiating position accurately to Boris Johnson, failing to offer “robust advice” and misleading the prime minister into believing the EU was prepared to soften its red lines.

We learn from an article in The Times: How a fish supper summit battered hopes of a breakthrough, that last Wednesday’s dinner in Brussels with Ursula von der Leyen went badly and revealed the tensions at the heart of the final negotiations.

The meal itself was a consolation prize offered to the prime minister after requests by Downing Street for conversations with Merkel and Macron were rebuffed. According to The Times, British accounts portrayed the conversations over the table as strained, with a source quoted saying:

This was said to be intentional, with von der Leyen and Barnier determined not to offer anything, and wanting to impress on Johnson that any movement had to come from him or the talks would fail. The source told The Times, and this is the crucial point, “I think there is also a sense in many capitals that Frost is not always conveying to his boss where the negotiation really is”.

“It was essential that Johnson heard it first hand and got the message that, absent major movement on the level playing field issues, it’s headed unequivocally for no-deal”, the source added.

So, who is the man – the conduit between the EU and Boris Johnson – given such immense power over the future of the United Kingdom and who will carry the can when it all goes wrong?

Frost was born in Derby and educated in Nottingham, before obtaining a first-class degree in French and History at St John’s college, Oxford. Most of his career has been spent as a diplomat representing the UK in Europe, and he was private secretary to the head of the Diplomatic Service, Sir John (now Baron) Kerr around the time Kerr was drafting Article 50.

Kerr later said he never imagined the UK would be the country using the EU escape clause – but perhaps Frost did, who knows?

In 2013, he became chief executive of the Scotch Whisky Association, and in 2016, in a personal capacity, he wrote a section of a 74 page report on Brexit by Portland Communications in which he seemed to be opposed to leaving the EU, saying being out can never be as good as being in and that Britain would be the weaker partner, unable to get a better deal.

He wrote, “Can any of these [models based on Norway, Switzerland, Canada] be economically better for Britain? It’s fairly easy to see that the answer must be … no”.

In 2019, when he became prime minister, Johnson appointed Frost as his special adviser on Brexit and he seemed to convert into a true believer.

It is claimed he was responsible last October for Johnson thinking the EU would accept a technological solution for the Irish border. It took a “brutally frank” conversation with Angela Merkel to disabuse him of this notion.

This is why there is now a border down the Irish Sea.

If he misled Johnson in 2019, it appears he may have done so again more recently, convincing the PM that the EU would concede on the fisheries, level playing field and governance measures, when it is now abundantly clear (and probably always was) they will not.

Perhaps his greatest moment of hubris came on 17 February this year when he ventured into the lion’s den with a speech of stunning arrogance, setting the tone for the whole disastrous saga.

He began with this:

“My aim tonight is to try to explain a bit better why people like me think as we do – how we see the world and why we think Britain is better off out of the European Union.”

He told his audience he “supports Brexit” and was “one of the few Brexit-voting diplomats.” If true, he must have undergone a rapid epiphany sometime in the last few days before the referendum in June 2016. I suspect the truth is he voted to remain and then saw which way the wind was blowing afterwards.

Talks are now stuck on the level playing field – essentially competition rules and the degree of divergence we are seeking. Frost may now regret what he said that February night in Brussels, when he openly proclaimed that the UK intended to “have a huge advantage over the EU – the ability to set regulations for new sectors, the new ideas, and new conditions – quicker than the EU can”.

“Even if there is a short-run cost”, he said, “it will be overwhelmed rapidly by the huge gains of having your own policy regimes in certain areas”.

“So to think that we might accept EU supervision on so-called level playing field issues simply fails to see the point of what we are doing. That isn’t a simple negotiating position which might move under pressure – it is the point of the whole project”.

The EU listened carefully to what Frost said and took him at his word.

Which is why they are now even more determined to ensure Britain does not tilt the playing field in its favour.