Pen Hemingway looks at the examples of strong women over the years, with clear evidence that women warriors have existed across cultures. 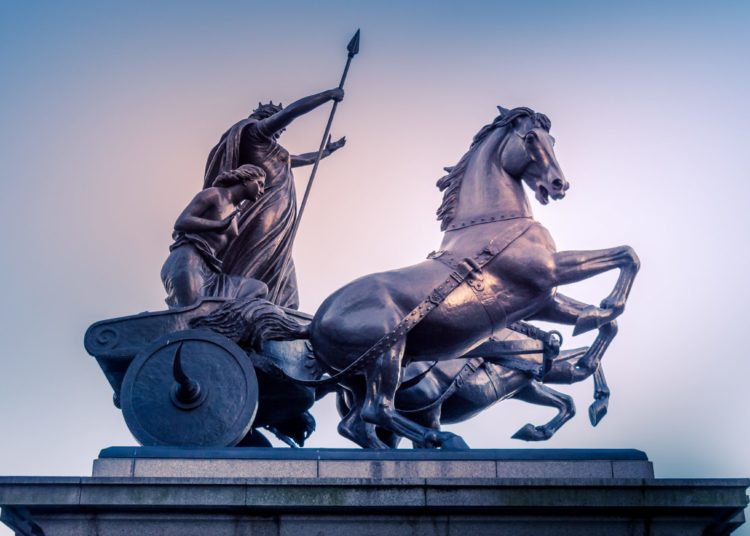 Photo by Chris Karidis on Unsplash

My husband (a Southerner) calls me (a Yorkshirewoman) “Norah Batty” when he wants to insult me. I take it as a compliment. If ‘battle-axe’ is a patriarchal term, meant to denigrate – we should take it and own it. Reclaim the battle-axe.

Something about the culture of the North of England generally has made the idea of ‘strong woman’ into a trope. Coronation Street has had its Elsie Tanners, Ena Sharples and various other working class ‘warrior women’ over the years. As has its London counterpart, EastEnders – Pat Butcher, Pauline Fowler, Kat Slater … north, south or in between – maybe it’s in the DNA.

When the TV series Vikings ended recently, I wondered if women warriors like Lagertha were historical fact, or wishful thinking and historical revisionism. So I went to look at the archaeological record and discovered we don’t just have to look at our Viking ancestors for warrior women.

One of the earliest burials was that of a woman, in a chariot, with a mirror buried beneath her head (mirrors turn up in Iron Age female burials). The barrows and chariot burials were typical of the Parisi – a French-Celtic tribe who emigrated to, and were active in, Iron Age East Yorkshire. Proof of our deep pan-European roots.

The Wetwang chariot burial was an excavated barrow, found almost by accident in 2001. It contained the skeleton of a high-status female of the second or third century BC (Iron Age); her skeleton placed in a partly dismantled chariot. She was a middle-aged woman, probably closer to 45 than 35 years old, and her skeleton showed some signs of trauma that may be consistent with a fall from a chariot at some earlier point.

To be buried with a chariot would send a very clear message – like being buried in a Lamborghini, today. Most chariot burials are of men, but the fact that a woman has been found in a chariot burial, tells us that the Yorkshire Celts may well have had women who went to war. Caesar in the Gallic Wars wrote of the Britons having chariots pulled by two horses, which were used in battle:

“When the barbarians meet with cavalry in battle, they cast their javelins at the enemy and then, descending from the chariot, join battle with their swords”.

No romp through historical battle-axes would be complete without mention of the Iceni tribal leader, Boudicca, who fought the Romans in 60AD. Boudicca has herself been hijacked by sexist denigration. Artist John Opie famously painted her in the 18th century, naming his painting “Boadicea Haranguing the Britons”. A male leader like Henry V does a ‘heroic speech’ to rouse the troops – a female leader doing the same, ‘harangues’.

Tacitus and other sources mention female gladiators, and artefacts depict them. The British Museum has a marble stone relief carving from Halicarnassus, depicting two female gladiators: Amazon and Achillia. Historians believe women generally fought against other women in the arena, or hunted wild boar and game. Female gladiators probably fought in historical re-enactments, as Amazonians or Carthaginian chariot driving warriors. Emperor Septimus Severus banned women gladiators in 202 AD, which suggests they were common enough to ban.

Some people believe female gladiators had their origins with a cruel ‘joke’ by Nero, who ordered the pampered, wealthy wives of wealthy noblemen to fight each other in the arena. This spectacle of privileged, effete women comically fighting each other, evolved into professional women gladiators playing out roles of exotic noble savages – often women from cultures the Romans could ‘other’, like Nubians, or Celts. And they would have largely been involved in battle re-enactment and able to kill each other.

Much of Europe shares Viking ancestry, given that they were fierce traders as well as raiders. History gives our continent shared DNA – with each other and those far beyond.

In Birka, Sweden, a grave that archaeologists had long thought of as a high-ranking, well-furnished warrior’s burial, contained a skeleton that was able to have its DNA sequenced. Its grave goods – an axe, sword, spear, two horses, two shields and armour-piercing arrows – all led to the assumption the occupant was male. When sequenced, scientists found that the warrior’s bones had no Y chromosome, proving it to be female.

Various Old Norse sagas mention female warriors, but they are often dismissed as just legends, rather than fact. The Old Norse word for female warrior, ‘shield-maiden’, was ‘skjaldmær’. Women warriors are mentioned in literary sources (admittedly written later, in medieval times), like Hervarar Saga. And of course, what are the Valkyrie if not warrior women?

The Birka female warrior’s grave makes it harder to dismiss Lagertha in Vikings as wishful thinking or feminist-inspired revisionism (or indeed many other contemporary female reenactors portraying female warriors). Over the past couple of hundred years, scholars have gone back and forth on the issue. Current thinking is that women warriors were, indeed, A Thing. And not something made up after the fact, to justify contemporary media having a more balanced view of the sexes.

Women have fought throughout history. So, to all battle-axes and shield-maidens out there – “shield wall!”