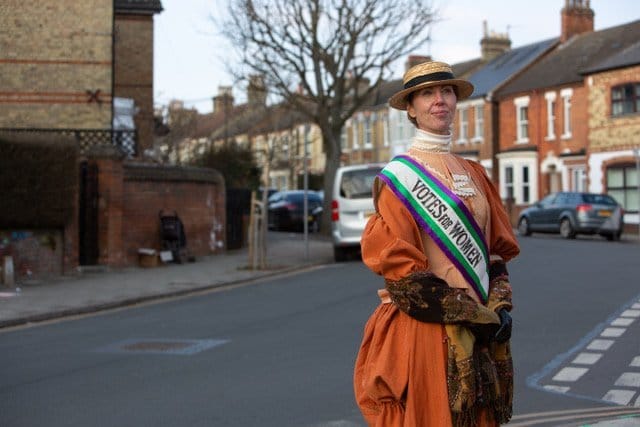 Leaving aside Greek goddess or half-naked nymphs, there are 71 statues of women in the UK, of which 46 represent royalty. In contrast, there are 517 statues of men, 19 of which are royals. Throughout history, and across the globe, women’s achievements have tended to be overlooked and undervalued, often written out of the history books. This sort of ‘everyday sexism’ means that women continue to fight inequalities to this day.

By honouring someone with a statue, we ensure their contributions are not forgotten. Too often in the history books, women have been relegated to supporting roles for their male partners, friends and family members. In fact, they were the leading lights – the creators, composers and cutting-edge scientists that young women today should look up to and aspire to follow. Today, on International Women’s Day 2021, I want to highlight a campaign that’s underway to address this imbalance, in my home town of Bedford.

In 2016, Rachael Rogan started a group called Women of Bedford. The group’s mission is to erect a statue of a woman in the town. Whilst attending a heritage meeting, she discovered that not one of the town’s eleven statues celebrated a woman. Further investigation in the local archives uncovered a wealth of material on pioneering, groundbreaking women throughout the town’s history, none of whom were recognised or celebrated in public art. Bedford’s history was told of men, by men.

Determining to alter this, she formed Women of Bedford, inviting like-minded women from local organisations, sometimes signing up customers in her bookshop. Interest grew, and so too did the group. Eventually, after enlisting the mayor’s support, the group gained permission for a statue to be erected and worked with the council to identify a suitable site. They commissioned artist Diane Gorvin to create the statue’s design – all that was left was the most important decision of all – which Bedfordian woman to celebrate?

The group received a huge amount of support from the archives and several local historians. They discovered a whole untold history of the town, Bedford’s hidden women, who accomplished astonishing feats at a time when women had little to no agency, all of whom were worthy of celebration and a statue in their name. Rogan said:

“These women made a major contribution to the town and their legacy lives on. Dr Ethel Maud Stacy and Dr Dora Mason set up a general practice in the town in 1922, making their marks both as doctors and as campaigners for women’s equality.

“Dr Mason was a leader both in the suffrage movement and in transforming medical care for women, eventually becoming deputy medical officer for Health. She was a founding member of Bedford’s Women’s Political Union, president of the Bedford branch of the National Council of Women, and founder and president of the Bedford branch of Soroptimist International.

“Dr Stacy was one of the first women to qualify as a doctor. She set up, nationally, the Maternity and Child Welfare subcommittee of the British Medical Association, and was a leader in the Bedford Soroptimists and National Council of Women.

After much deliberation, Women of Bedford finally chose Amy Walmsley, as the subject of the town’s first statue of a woman. Born in 1868, Amy was an educationalist who, at 21 years of age, was appointed the principal of Bedford Kindergarten School, transforming the school and applying her business acumen to purchase property as the residence for women who were training to be teachers – an important point, given that women who had to move to Bedford to train would otherwise have to live in boarding houses, which threatened their reputation, sometimes to the point of making such a move prohibitive.

By 1901, Amy became the director of the kindergarten and college, after buying out the majority of shareholders. It bloomed under her charge. During this time, Amy travelled to America and was inspired by the work of educational reformer John Dewey’s. She developed her theories around the importance of education for young children, and created a new teaching method, focusing on fun and experimentation in learning, a technique still used today. Contrast this with the strict Victorian setting of children working silently on their copybooks.

Walmsley then became involved in politics and supported the war effort by organising entertainment nights for troops during the First World War. A feminist of her time, she was a suffragist, writing and reasoning with politicians. In 1922, she was appointed the first female country councillor in Bedford. She retired at 59, dying one year later.

Rogan explains that Amy created “an environment to empower women”. With her caring nature, her advancement in teaching, and her advocate for women rights, she embodied everything we take for granted in the modern world. The Women of Bedford chose her for the statue and over the next three years raised £15,000 towards the total costs of £100,000 for the project.

Fundraising temporarily paused due to the coronavirus pandemic, and the group has agreed to focus on various other ways to spread the word. This includes an exhibition of Amy’s maquette at the local Higgins museum, and community outreach work to identify other unsung heroines in the town’s diverse population.

Chiara Mac Call, one of the Women of Bedford organisers, said:

“We wanted to reflect our plans to raise funds for a statue of Amy Walmsley (an amazing woman in Bedford’s past) by showcasing some of the wealth of amazing women that live in Bedford right now.

“The point of a statue that celebrates the achievements of a woman is to redress an existing imbalance, but that imbalance exists, at least in part, because historically we have valued and uplifted certain people and narratives over others”.

The group continues to fundraise for Amy’s statue, but is expanding their programme to celebrate all Women of Bedford. They intend to assemble an archive of original women’s stories, a place to identify and illuminate the women who have built and continue to build the town. Rogan says, “These stories will rewrite the narrative, reminding us all of the fundamental role women play in making a town great. WE want ALL stories – inspirational women who have made an impact on the lives of Bedfordians, past and present.

Ultimately, the Women of Bedford hope to inspire other communities to fight for diversity in representation. As Rogan says, “raising awareness of amazing historical women celebrates the pioneers of the past to inspire the future”.

You can learn more about the Women of Bedford via their Facebook page.