Hard Brexit - with its new border - was always going to be a test for Northern Ireland and the Belfast Good Friday Agreement. 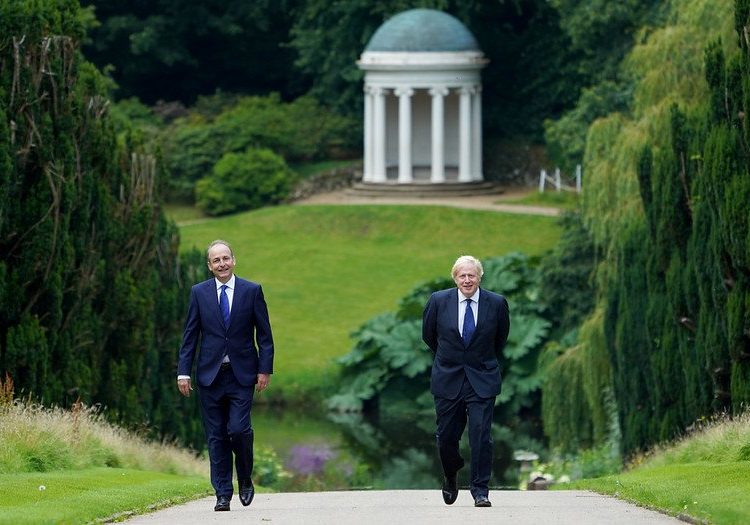 As the prime minister continues to resist calls to hold a special crisis summit to address the growing violence in Northern Ireland, this is your daily reminder that the longer you ignore something, the worse it gets. Actions, and inactions, have consequences. So does the doublespeak that Boris Johnson’s fond of.

In 2018, Sky News reported that Johnson told the DUP no British prime minister could accept a border in the Irish Sea. But by 2019 , he was so determined to “get Brexit done” the he agreed to just that. Just before the 2019 general election, he told a room full of Northern Irish business people that there would be “no additional checks” on goods travelling between Northern Ireland and the rest of the UK.

Northern Ireland may be the prime minister’s undoing

The prime minister is used to winging it – quite often going ‘off piste’ at press conferences, or making it up as he goes along at prime minister’s questions. So far, if the polls are to be believed, he’s got away with it. But Northern Ireland, and the protocol he agreed to, may just be his undoing.

Undeniably, Brexit was always going to be a test for Northern Ireland. A test because that’s where the UK-EU land border would be, and a test of the Belfast Good Friday Agreement.

Much of the ability of the Good Friday Agreement to work was predicated on membership of the EU. When negotiations were going on in 1998, no one could envisage a point or a place where the UK and Island of Ireland were not both part of the EU.

As the UK in a Changing Europe explained, “it was the joint UK and Irish membership of the EU, and in particular the outworking of the customs union and single market, that facilitated the freedoms across the islands that people quickly took for granted”.

In other words, the ability of people to lead their lives and to do business as they chose on a north-south and/or east-west basis was massive (explored in some depth here).

The Belfast Good Friday Agreement and peace in Northern Ireland

It’s not just about the economics, it’s also about the social conditions that the agreement brought and that were underpinned by membership of the EU, especially over the issue of rights and justice. The ability to cross the border freely, and to enjoy access to the same protections or rights, has been a significant feature of bringing some stability back.

Anyone with any modicum of understanding of the hard-fought, and won, peace settlement in Northern Ireland would have been aware of this. It’s not hard to understand.

The Belfast Good Friday Agreement is 32-pages long. That’s all. What the UK government signed up to 23 years ago is clear and unambiguous. For the former Brexit secretary Dominic Raab to concede he had not read all of it was shocking – and goes some way to explaining the subsequent mess the government has got itself into.

Who was advocating for Northern Ireland when the government opted for hard Brexit?

Of course, it didn’t have to be like this. Much of what’s unravelling now lies with the actions of successive Conservative governments, post-2016. As Chris Grey wrote yesterday “hard Brexit did not flow automatically from the 2016 Referendum but was the interpretation chosen by successive British governments”.

The single biggest decision, and one made AFTER the referendum, was the one to leave the single market and customs union and, as a result, the need for an economic border with the EU. As soon as you go down that route you inevitably have to create, and manage, a physical border. And the rest, as they say, is history.

As crucial legislation in the shape of the EU Withdrawal Bill was being debated in parliament, there was no one from Northern Ireland to really advocate on the behalf of the Good Friday Agreement (with the exception of the wonderful MP Lady Herman). The DUP said very little. Sinn Féin refused to come to Westminster, and Stormont had not met since January 2017.

This vacuum meant that whilst some – including Michel Barnier – expressed concerns, there was no consistent stream of parliamentarians who had this at the front of their minds. And whilst there was some indication of a consensus that the Brexit negotiations must not jeopardise the peace process, with its unique and bespoke settlement, it was not borne in the wording of the bill.

The government must also accept responsibility for failing to understand the role of devolution in underpinning the Good Friday Agreement. When it was signed, it was based on the principle of devolution, with the principles of consent and self-determination woven through the agreement.

This was to ensure laws could be passed that reflected the unique, particular circumstances of a society that had been adversely affected by the conflict. But this has been totally upended by Clause 11, and Schedule 2 of the EU Withdrawal Act.

When it comes to Brexit, nowhere are the stakes higher than in Northern Ireland. Shame on our government, and for Johnson and his various Brexit secretaries, not to recognise this. And more importantly, not to act on this.

As Chris Grey shrewdly remarked yesterday “it cannot be pretended that what is happening in Northern Ireland has come out of a clear blue sky – as one might think from some of the news headlines”.

Issuing a statement on the 23rd anniversary of the signing of the agreement, Irish Taoiseach Micheál Martin said:

“We owe it to the Agreement Generation and indeed future generations not to spiral back to that dark place of sectarian murders and political discord. There is now a particular onus on those of us who currently hold the responsibility of political leadership to step forward and play our part and ensure that this cannot happen”

It is now up to our prime minister to show both leadership and statesmanship. Most importantly it is this government, and Johnson in particular, who pushed for a hard Brexit and for coming out of the customs union and the single market. As Jonathan Powell, chief British negotiator in Northern Ireland from 1997 to2007, writes in today’s Observer:

“The worst problems in Ireland have always happened when Britain ignores it. And it means no more using it as a battering ram in a new post-Brexit conflict with the EU. Most of all, it means coming clean with the people of Northern Ireland about where they stand.

“The government can no longer claim clean hands if it fails to take these steps and the result of its political approach is the unravelling of peace in Northern Ireland.”