How on earth did such an iconic figure end up racing for fifty quid in Wakefield when, by rights, he should have been defending his title in Munich? 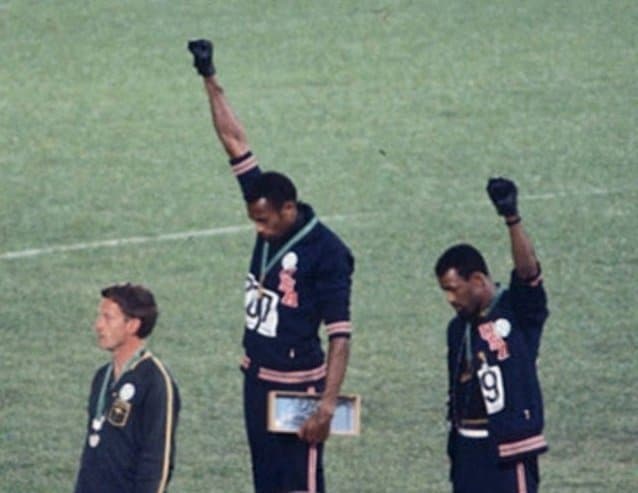 Sunday 22 July 1972. Reigning Olympic 200m champion Tommie Smith is going through his pre-race stretch routine on a humid afternoon. A thunderstorm, which will later bring the racing to a halt, hangs around like the teenage boys who are hoping for an autograph. But this is not the Munich Olympics, or even a warm-up event. This is Belle Vue, home of Wakefield Trinity rugby league club.

Four years previously, the year Trinity last won anything, Tommie Smith and fellow American and bronze medalist John Carlos, had staged the most famous protest in Olympic history. That day, in October 1968, both athletes had removed their shoes on the podium and raised a single black glove in protest at the treatment of African Americans. Three months before that, Martin Luther King had been assassinated in Memphis, sparking nationwide riots. In February, in Orangeburg, South Carolina, three protestors had been shot dead at a protest against segregation in a bowling alley.

For their stand, which zipped round the wires and hit the front pages all over the world, Smith and Carlos were unceremoniously booted out of the US Olympic team, and Smith never represented the USA again, despite being the holder of seven world sprint records.

In the context of the Black Lives Matter movement, this event exists like something in a dream. Did it really happen? How on earth did such an iconic figure end up racing for fifty quid in Wakefield when, by rights, he should have been defending his title in Munich?

A recent flurry of interest on the Facebook page of the Wakefield Historical Appreciation Society prompted all sorts of memories. Paul Harrison, now of Dallas, Texas, remembers the event as his first introduction to American football.

“I wore my first helmet that day and ended up pen-palling one of the team who spent several Christmases at our house in Wakey.”

However, the gridiron didn’t impress everyone. Another commented that, “Everyone drifted away during the American football, because it was like watching paint dry.”

Some confusion in locals’ memories stems from the fact that 1972 event was the second such event, following a ‘Sporting Spectacular’ the previous year, which also featured an American football fixture between two teams from RAF Mildenhall in Suffolk.

The main attraction in July 1972, apart from some rugby league sevens, was the sprinting. Billed as a world championship of sprinting, it featured Scottish Powderhall sprint champion George McNeill, legendary Hull Kingston Rovers winger Clive Sullivan and Roger Ingham, who now lives near Skipton. By his recollection, the issue of racial discrimination was mentioned at the time. In a recent letter to the Yorkshire Post, he recalls:

“There had been speculation of the American signing for a rugby league club, and in the conversation mix in the dressing room before the start, Smith – noting Sullivan’s similar ethnic features – enquired regarding any racist slurs. Sullivan replied very much on the lines of all the rugby league fraternity being simply one big happy family, regardless of any skin colour.”

This rather rose-tinted view has some truth in it: racist abuse never infected rugby league grounds in the same way as football, though Sullivan’s comment says as much about the man’s benevolent attitude to the world in general as the game he graced for so long. In any case, rugby league fans’ negativity invariably finds more local targets, there being no shortage of axes to grind along the M62 corridor. What it taps into though, as this writer can testify having been present on that day in 1972, is the oddly selective nature of the prejudices prevailing in Yorkshire at the time.

Black American athletes, indeed black Americans in general, were viewed almost as superhuman: Muhammad Ali was universally idolised and when he fought Joe Bugner in 1973, no one I knew was rooting for Bugner. However, at the same time as holding such athletes in high esteem, stereotypes about Africans and South Asians were still the norm. As Lenny Henry once quipped, the only black face you saw on TV back then was pushing Detective Ironside’s wheelchair!

But on that day, fans saw Smith narrowly lose out to McNeill in a 100m then completely eclipse the whole field in a 200m. Later on, he took some of the young athletes who’d taken part in earlier races to the Wimpy Bar in Northgate for tea. What this sophisticated resident of San Jose made of Wakefield, one can only imagine.

And that, apart from a copy of the programme for the day and some photos, is all we know. There is no record of who invited him. According to the Scottish Distance Running website, the Scots in the field invited him to run in the Highland Games at Jedburgh, but local officials turned him down for entering too late!

These days, Dr Smith is a retired teacher, having eventually gone into coaching and teaching at Santa Monica College. Wakefield Trinity still haven’t won anything since 1968. That day, when the thunderstorm finally happened, the crowd, already underwhelmed by gridiron, melted away. It is to be hoped that the memory of such a visit from an iconic figure is not allowed to evaporate in these times, where people still wrestle with prejudice every day.