Norky reminisces about Whitsuntide and the community festivals that came with it: music, banners, and pubs for the dads! He also remembers family parties, when the children were sent to bed and the adults went on late-night road adventures. 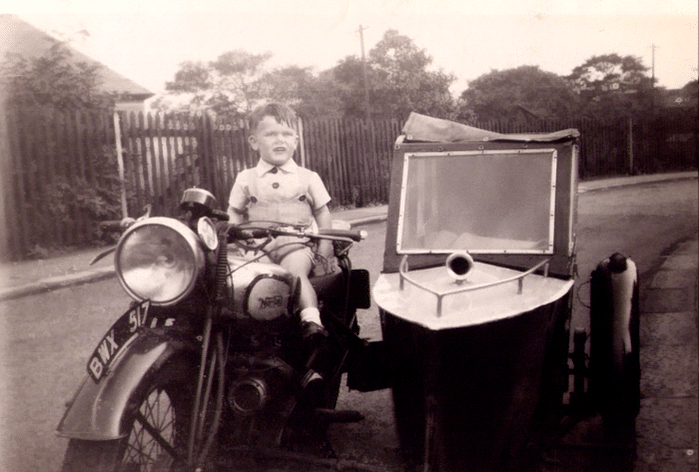 At Whitsuntide, each church and chapel would have its own procession through their respective villages, sometimes several from the same village. At the front would be huge embroidered banner depicting some past important religious event associated with that particular church. It took six men to carry and support the banner, with belts and ropes around their waist, as it was fastened to two pieces of timber, similar to flagpoles.

Behind the banner came the brass band playing traditional, familiar marching or religious pieces of music, followed by seemingly hundreds of supporters. The weather was always warm and the music was wonderful. I, like many other boys, would march at the side of the band to the beat of the drum, pretending that I was somehow controlling the pace.

The bass drummer was the musician I’d watch when I got too tired to march. He carried a large bass drum fastened to straps and belts around his chest. He would also wear a sheepskin between his uniform and the drum. I would watch with fascination the different actions and rhythms; sometimes he would strike the left side of the drum with his right stick and the right side with his left stick, damned clever stuff. Percussionists are on the whole very underrated musicians.

During this village procession, the dads would often find an excuse to pop into the pubs on the way around, then take a short cut to meet up with the family again and then pop into the next pub. My wider family would meet up to have their own Whitsunday pub walk.

Uncle Mac was descended from the Scots and must have thought that he would have to keep up their tradition of hard drinking. He boasted to the other three that he could drink as many of his favourite ‘Barley Wine’ as they could drink their standard bitters. Never ones to turn down a challenge, they took him on; experience told them that Mac would succumb sooner or later.

After the Whitsunday walks a dinner would be prepared at the home of Grandma and Granddad Holdsworth. There were several times when Uncle Mac could be seen slowly slithering under the dining table, much to Aunty Eva’s disgust. I am sure she thought the other three had got him drunk deliberately. She may have been right. Uncle Harold and his sister-in-law Eva didn’t always see eye to eye; they had a clash of personalities. I loved them both dearly; fantastic people, but they definitely did not love each other.

One Christmas Uncle Frank and Aunty Barbara were having a party at their home in Longwood, just for the grownups. It was the early hours of the morning, all had had plenty to drink, when arrangements were made to get everyone home.

Uncle Harold had an old BSA M10 with a box at the side. It was used around their farm to transport bales of hay or the occasional pig and so on. Dad and Harold volunteered to take Eva and Mac home; Aunty Eva could have travelled in dad’s sidecar along with Uncle Mac, but jumped into the box determined to show that she was brave and confidant and not going to be intimidated by Harold.

They set off with Harold in the lead, and Eva in the box. They were travelling over potholes, ruts and cobbled roads. By the time Eva and Mac had got home Eva had been bounced around every corner of that box, still showing determined resolve.

Harold was wearing a cheeky grin; I’m not sure who won that particular encounter. Even 60 years after that incident, Harold would still have that cheeky grin when he recounted that story to me.

Above: The Norcliffe family proudly presenting their posh new BSA Golden Flash with double adult sidecar. Me on the right on our earlier Norton 16H. Mum would occupy the sidecar single seat, Rhondda on the back of the bike and I slept for hours in the nose of that ship sidecar.

After another family Christmas do, Uncle Frank volunteered to take the others home in his three-wheeler Morgan. There were six people in the little Morgan. It was the early hours of the morning and all of them had a lot to drink. When the Morgan freewheeled in gear, it would back fire, and while they were travelling down Swallow Lane, Frank was allowing his car to overrun deliberately, bang bang bang!

Just then they noticed a chap walking up Swallow Lane, also quite drunk. He put his hands up and surrendered – they couldn’t stop laughing! These moments of simple pleasure culminating in group hysteria are often the most memorable; ones that money cannot buy.

This was at a time when the drink driving laws were a lot more relaxed, there was no traffic on the road, and pedestrians easily surrendered. Most road traffic accidents and injuries were as a result of old, badly designed vehicles that had little or no safety features (seat belt, disk brakes, airbags and crumple zones). If anyone had the misfortune to have even a small road traffic accident, you could consider yourself lucky not to have an injury of some kind.