Peter Norcliffe recalls the day when he helped his neighbour with a water leak, but came face to face with a fire; he reminisces about his years as a part-time firefighter and the activities his brigade got up to. 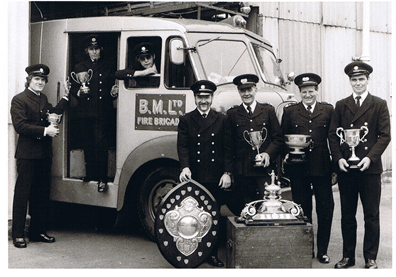 A recent discussion about family pets evoked a memory concerning a fire, a flood and a floating gerbil cage. I thought this might merit a longer description, along with my own experiences as a part-time firefighter. Please be assured that no harm came to any gerbil either during the event or indeed during the writing of this ramble!

The incident occurred on the first day of the firefighters’ strike in 1977. It was around teatime (five o’clock-ish for us up north) and my wife and I were minding our own business when our neighbour came rushing in saying that she had a water leak from upstairs. I hurried round to find the water had fused the electrics, but in total darkness I managed to turn off the water and began to climb the stairs to ascertain what had caused the leak.

As I neared the top, I was hit by a wall of smoke, unseen in the dark until my head went into it. I returned to our house and informed our neighbour that there seemed to be a fire. She said, “Oh, I thought there was” – a suspicion we can all agree she might have shared with me sooner. It seems there was a water leak to the hot-water cylinder, and it continued to leak onto the immersion heater until the sparks set everything alight.

The fire service was called, but it was the army with their Green Goddess fire tender that enthusiastically attended. When the first officer rushed up with hose in hand and climbed the ladder I’d thoughtfully put up, he broke the window and called for water, but nothing happened. The driver couldn’t get the ‘power take off’ to engage in the cab, therefore no water was available. Unfortunately, the open window then allowed air to reach the fire and the smoke to escape which meant the fire rapidly gained in strength. Water was eventually obtained from the standpipe in the street and began to pour into the property.

Just then, another equally enthusiastic team turned up at the front with their own Green Goddess and, deciding they didn’t want to be left out, rushed through the front door and up the stairs in what appeared to be a pincer movement. They too decided to take water from another standpipe.

When running out a three-inch firehose from a water supply, you have to run faster than the water coming up the hose. This soldier did not, and it wrapped around him like an angry boa constrictor. The fire had already been put out by the team at the rear, but the front team were determined to continue. Eventually the standpipe was turned off, allowing the soldier to disentangle himself, and although soaking wet (and slightly taller and thinner), he was otherwise unharmed.

This tall, thin, wet soldier finished by emptying the entire mains water supply for Golcar and district into that bedroom, resulting in most of it running into the next adjoining house downhill, which happened to be ours. The water concentrated in our kitchen, resulting in the gerbil cages going for a little float down the river. No harm done, but the whole incident was reminiscent of a Keystone Cops episode.

It so happened that one of my running about activities was as a part-time firefighter while I was working at a company called Brook Motors in Huddersfield. The company had quite a lot of equipment leftover from a time when many factories and mills had their own fire brigades in the event of bombing, or in case the professional fire service couldn’t attend a fire because of other commitments during WW2.

Many factories kept their fire brigades to carry out servicing and repairs to the alarms, extinguishers fire hydrants and equipment within the fire station. Some companies, including Brook Motors, encouraged and paid for their brigades to enter competitions, which would take place throughout the summer across the North and Midlands. As I was competitive and liked to run around a lot, this competition aspect appealed to me much more than servicing fire extinguishers. And most entertaining and rewarding it turned out to be.

Brook Motors provided us with excellent equipment to play with. All the senior ranks and team members had uniforms. We had breathing apparatus, the use of a passenger series Land Rover for attending competitions and towing the pumps, and all the hoses, standpipes and accessories we could ever wish for. Sometimes we even attended fires.

During the firefighters’ strike in 1977, there were quite a few moorland fires and we were asked to be on standby in case we were needed. We spent days sat around in our fire station drinking coffee and playing cards, and some of us were quite disappointed that we were never called upon.

This programme is from one of the many competitions we attended, this being held by the Widnes and District Fire Brigade Association, on 21 of May 1977. They’d run this annual event since 1946. On this occasion there were 12 companies attending, which in turn were able to field 27, two-man teams.

A team we competed against many times, as can be see in this programme, was the National Coal Board (NCB). Teams like these were semi-professionals working in an environment where regular training and excellant standards were very important. As a result, we often came second to the NCB. We regarded them as our benchmark, if not our nemesis.

The following year we were good enough to enter the national fire brigade competition, where we were up against the best teams from throughout the land, including of course, the best the NCB could field. At the end of a hard, gruelling day, we came a creditable second behind British Leyland, beating NCB into third place. We were more than happy.

Training for a four-man run – I’m on the left and the hose is dry (no water), Bob is on the standpipe, Pete (in the middle) has almost run out his hose, and Terry (on the right) is carrying the branch (the single holed nozzle plugged into the end of a fire hose) in his left hand.

Not that everything went smoothly every time. We were asked to attend a competition during a Lancashire town’s summer festival. All the dignitaries had seats along the competition course, so they could get a grandstand view. They were dressed in all their finery, chains of office and big Sunday hats.

This particular event was a four-man run and it was wet, which meant water was going to be running from a standpipe and the ‘last man and branch’ had to knock down a target to set the finishing time. I was the last man and branch. Number one is responsible for the flow of water; number two plugs in then runs his 75-foot hose out, catches the end of the hose that number three is carrying, plugs into his own then runs back to the stand pipe; number three runs out his 75 feet, catches the hose of last man, plugs in and then runs to catch him up. All four have to be stood to attention and the target knocked down for the time to be taken.

So, the gun went off. Peter plugged in and ran, with Terry next. All was going well. Bob kept the water flow just behind the runner and as soon as he saw me come to a stop he threw open the valve. In training I had shown that I could have the branch plugged in place in a split second, as I did this time. I have a reasonable excuse for what happened next, I think. There had been several runs before ours, and the ground was very wet. Just as I plugged in and attempted to take aim at the target, I slipped and the full jet of water tried to turn the hose into another very aggresive boa constrictor. I just knew the jet of water had gone in the direction of the dignitaries but I dared not look.

After we wrapped up, my teammates took great joy in telling me I had taken out the whole row of dignitaries.They told me there were seats, bodies and hats scattered all over the field. Even our more serious senior offiicers confirmed I had indeed soaked the whole row. Unsurprsingly, we didn’t win that run – I was too busy rolling about on the floor, fighting the attentions of a very large and irate snake,to get to my feet and stand to attention. I don’t think we were invited back either.

After the industrial and political unrest of the 70s, companies became less confident about the future and were reluctant to sponsor these sorts of activities any more. Brook Motors Huddersfield had already begun a steady decline and by 1980 I and 250 of my fellow workers had been made redundant, soon followed by hundreds more. I had worked at that company for seven years, which is the longest time any company had put up with me.

It was time to move on anyway. And no, I didn’t become a firefighter.