On the heels of an election that was more like a pre-independence referendum, Ian Kinsey reports on an elections that challenged the justification of Scots to determine their future, provided some surprise and ethic milestones, and envoked the ghost of Edward II and Black Agnes. A constitutional clash could be round the corner 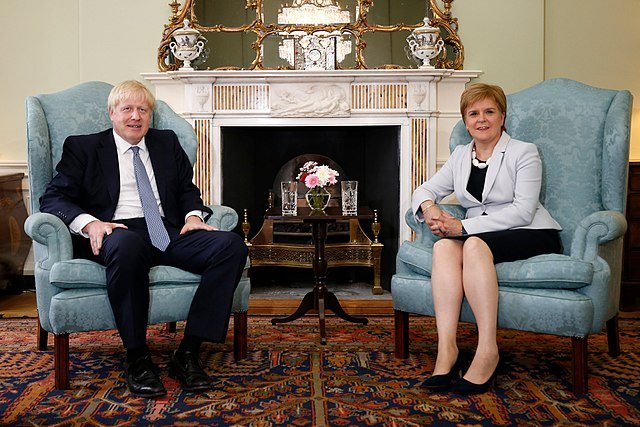 Johnson met with Nicola Sturgeon for Union of Scotland.jpg

The Scottish parliamentary vote on 6 May appeared to be more a pre-referendum poll than a national election. Professor Sir John Curtis, Strathclyde University, said during the election count:

“Virtually everyone who voted for the SNP and the Greens were people who are in favour of [Scottish] independence. At some point in the next five years there will be a constitutional clash with the Scottish parliament and the UK government.”

No democratic justification to block the rights of people

“Given the outcome of this election”, the first minister told those in attendance at Glasgow’s Emirates arena, “There is simply no democratic justification whatsoever for Boris Johnson or anyone else seeking to block the right of the people of Scotland to choose our future.”

Alan Little, BBC political correspondent, expressed concern about the fate of the union. “Having lasted slightly more than 300 years based on coexistence”, Boris Johnson may turn to “laws and force rather than consent”.

Sturgeon and Scottish Greens co-leader Patrick Harvey have stated that whether to hold an independence referendum will be decided by a simple Scottish parliamentary majority. For Westminster to challenge that process, Sturgeon said, “Will demonstrate conclusively that the UK is not a partnership of equals and that – astonishingly – Westminster no longer sees the UK as a voluntary union of nations”.

The first minister added that holding a referendum does not mean Scotland will automatically become independent. “That will be a choice for the people of Scotland.”

Although the SNP won 62 of the 73 first past the post constituency seats, the Conservatives captured nearly half the 56 regional, or list, seats based on the Additional Member System (AMS). The 2021 election almost mirrored the campaign from four years earlier.

The Scottish voting system was originally agreed to by all parties prior to the first election to the Scottish parliament in 1999. AMS was selected to ensure no one party would get an overall majority, therefore making coalitions likely. An additional advantage to AMS is that new and smaller parties, and independents, are more likely to get representation in the Scottish parliament.

Kaukab Stewart, elected to Glasgow Kelvin, became the first woman of colour MSP who is also first Muslim woman to hold a seat in Holyrood.

Pam Gosal is the new Conservative MSP for Clydebank and Milngavie, the first woman from an Indian Sikh background.

The surprise was the numbers who turned out to vote or did so by post. Of the 4.2 million eligible voters, 63 percent exercised their franchise, 10 percent higher than average. More than one million postal votes were received. Also, the right to vote was extended to:

Putting forward only regional candidates Alex Salmond’s pro-independence party, Alba, failed to register with voters or lure in many SNP supporters. Garnering only 2.3 percent of the overall tally, Salmond had hoped Alba would constitute part of a super-indy coalition under an SNP minority government. If successful, Alba supporters expected Nicola Sturgeon’s former mentor would push the first minister into putting IndyRef2 higher on the agenda.

Realities of governance and impatience from the sidelines

Although backed by the Scottish Greens for a pro-independence majority, in fact the SNP did finish one seat short of a majority. The consequence of that shortfall may play out significantly over the course of the nationalist mandate.

Any minority government needs support from other parties to pass legislation, steer through its agenda and pass budgets. Not having a majority on parliamentary committees may hinder some of the SNP’s priorities outside of independence.

Nicola Sturgeon and the SNP will also have to contend with the growing impatience of those who want to get IndyRef2 done. There is a vocal minority who believe the lead independence party as having wasted time these past seven years since the last referendum, six years since Brexit took Scotland out of the European Union, and nearly 18 months of a Boris Johnson Tory government.

The legend of Black Agnes verses the lessons of Bannockburn

The heat of battle between Holyrood and Westminster seemed to be dialled back the day after the official electoral count. In her acceptance speech, the SNP leader said the first and foremost task of the Scottish government is to lead Scotland through the pandemic, then to focus on recovery.

The day after the official count, Sturgeon told Andrew Marr that although she “wouldn’t rule out” a referendum by spring 2022, “We’ve still got many significant challenges ahead”.

Yet when the Scottish parliament does, and it will, pass independence referendum legislation and asks Westminster for a Section 30 order, the whole United Kingdom will hold its collective breath. Then Scotland will wait. Wait for the Tory government, the prime minister of the day, to decide to grant Holyrood’s request or allow the courts to settle the matter thus bringing Alan Little’s fears to prophecy?

Will it be Boris Johnson, who may envision himself as Winston Churchill but in the end be the ghost of Edward II, be confronting the spirit of Black Agnes? Sir Walter Scott wrote, “From the record of Scottish heroes, none can presume to erase her”.

English-Scottish history could well be re-written in the mandates of two governments.