here is a growing and increasingly tense row developing between the UK and EU over arrangements for implementing the Northern Ireland protocol in the withdrawal agreement, threatening plans for entry points into the province becoming a de facto EU border. 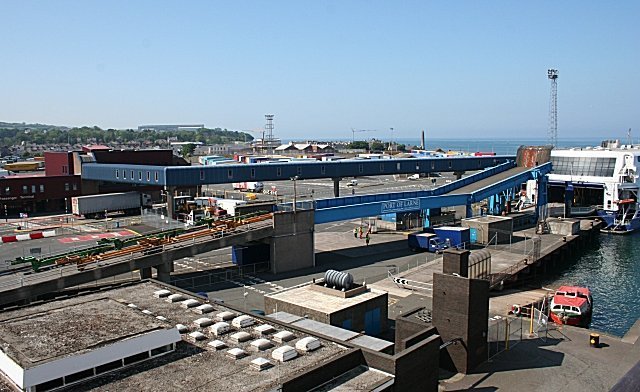 There is a growing and increasingly tense row developing between the UK and EU over arrangements for implementing the Northern Ireland protocol in the withdrawal agreement, threatening plans for entry points into the province becoming a de facto EU border.

Britain appears to be dragging its feet and going out of its way to be deliberately obstructive.

The politically expedient answer to last October’s crisis is providing fuel for a new one later this year. When Johnson conceded a border down the Irish Sea, something that he said he would allow “under no circumstances, whatever happens,” he must not have been reading the small print.

The prime minister has consistently denied there will be checks taking place on goods going both ways between Northern Ireland and Great Britain despite signing up to the withdrawal agreement last year which explicitly commits us to apply EU “Legislation as defined in point (2) of Article 5 of Regulation (EU) No 952/2013 [..] in respect of Northern Ireland” – (see page 301).

The man made famous for ridiculing EU rules seems not to understand the obscure reference to the entirety of the Union Customs Code (UCC) and “all the provisions supplementing or implementing it adopted at Union or national level” plus the Common Customs Tariff, reliefs and international agreements related to it. There will certainly be checks.

On 12 February, the EU sent a team to Belfast to meet stakeholders and find out what they understood of the NI protocol. They discovered these stakeholders were as much in the dark as the prime minister appears to be, according to a report by RTE.

Some thought there would be a bit of flexibility and were shocked to learn the EU expected preparation for the UCC to be implemented in full. The Joint Committee set up to oversee the protocol might reach agreement on exempting limited categories of good from duties, but this can’t be guaranteed.

Hauliers protested during this meeting that trucks from the mainland could contain hundreds of different items destined for Ulster supermarkets. If each individual consignment had to have customs formalities it would cost a fortune. The EU were unmoved. This is the solution Boris Johnson had signed up to, it was his choice, not the EU’s.

RTE’s Europe editor, Tony Connelly said, “One source spoke of a £2.99 frozen lasagne going from Great Britain to Lisburn. Compliance with customs formalities could end up costing the trader upwards of £200 worth in paperwork.”

The ferry operator Stena Line, told him that two thirds of the roll-on roll-off traffic involves unaccompanied trailers but under the UCC, Stena Line would have to submit safety and security declarations for these trailers, details of which they simply do not have.

The new border arrangements could force a serious reduction in consolidated or mixed loads travelling between GB and NI simply due to the costs of customs formalities. As one trade expert tweeted recently:

Freight transport may need to change so that trucks containing no more than 1–5 different products are sent to new distribution warehouses from which local supermarkets are then restocked.

On the very same day that Stena Line was complaining, Helga Schmid, the secretary-general of the European Union External Action Service wrote to Simon McDonald, the permanent secretary to the Foreign Office asking for the EU to be allowed an office in Belfast for EU staff who will be supervising the new border measures. The request was refused.

On 23 February The Sunday Times reported that David Frost, Chief UK negotiator, had been ordered to find ways to “get round” the NI protocol so the prime minister could “play hardball over trade”.

Ms Schmid tried again on 25 March, citing Article 12 of the Protocol as giving the EU certain rights, which she claimed extended to an office in Belfast staffed by technical experts. This time it was Penny Mordant MP, a minister of state at the Foreign Office, who turned the request down.

Last week the first meeting of the specialised joint committee on the protocol was held, with the EU reportedly asking serious questions, as Tweeted by James Crisp, Brussels correspondent for The Telegraph:

The British side repeated the usual holding phrase that it would “meet its legal obligations” without specifying what it thought they were and said so far it had recruited 500 vets, set out arrangements in NI for geographical indicators, and talked about new IT systems. But the EU were not entirely satisfied.

According to a document leaked to Crisp, Northern Ireland will face:

But businesses in NI have apparently been told nothing of these new requirements.

Crisp says the “EU want details & detailed timelines for lots more. Will UK build more new posts for the checks (they are needed)[?]. Which regulators will monitor this? Is UK ready to ensure UK fishing boats landing catch in NI are subject to EU rules?”

On Friday, Connelly at RTE tweeted a link to an EU technical note setting out in painstaking legal detail all of the commitments already made by the UK to implement measures which the EU now say are necessary to be “taken as soon as possible”.  The EU’s technical assessment says this means “a start by 1 June at the very latest.”

It sets the scene for a serious clash in four weeks’ time unless the British side can show work has been started on new infrastructure.

On Saturday morning in a Twitter thread and later a report for RTE, Connelly returns to the question of the disputed office in Belfast with the explosive claim that such a base had already been agreed last March with the UK under Mrs May. He quoted an exchange of letters between Schmid and McDonald.

According to an extract from one letter to the EU in March 2019, McDonald wrote:

“The UK government supports the continued presence of EU offices in Edinburgh and Cardiff, alongside London and Belfast, given the longstanding relationship the EU has with all three devolved nations.”

With masterly understatement Connelly says, “The extract casts doubt on UK claims that the issue had never been discussed with the EU, and that a request in February of this year for a continued EU presence in Belfast came as a surprise.”

It plays into the idea that Britain is being plain awkward for the sake of it. If so, then Johnson is doing serious harm to Britain’s reputation as a reliable partner in international negotiations.

Correction: The author is grateful to George Peretz QC for correcting a point concerning the powers of the Joint Committee. This article has now been updated.

We need to discuss the way out of lockdown