Boris Johnson is a good liar - he has consistently lied about Brexit, Northern Ireland and his private life. 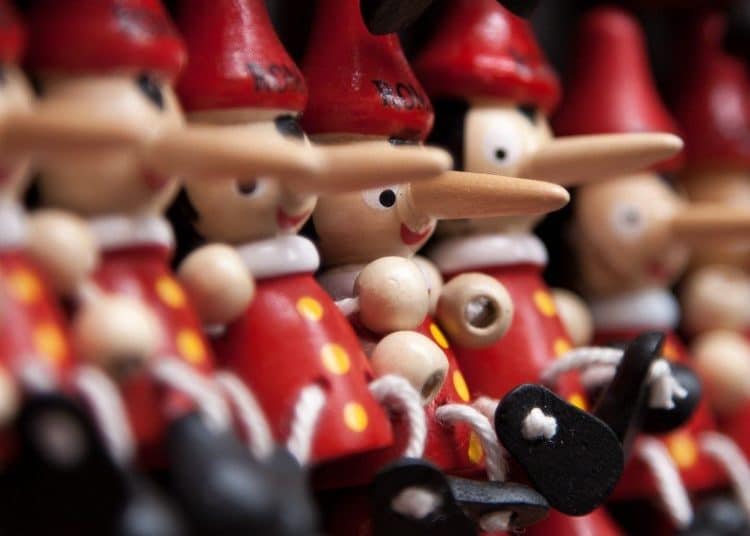 The first requirement of being a good liar is to convince yourself. The most effective communicators of falsehoods manage to believe that what they wish to be true is indeed true. When they utter the words, they are completely in the thrall of their own argument and simply don’t recognise the possibility that anyone could think they were busy distorting the truth.

The prime minister can be trusted – to lie

Next year, next month, the next day or sometimes the next minute those genuinely skilled at the craft can utter completely contradictory explanations with equal certainty. Unless you have a good memory for awkward things like facts, it would never cross your mind that they had asked you to believe anything different to the lie that they are selling right now.

It’s an ability that Boris Johnson has honed to an exceptional degree. Few other people could pull off some of his falsehoods and keep a straight face. He gives no sign whatsoever of the possibility that deception is in play. Either he is really good at deceiving himself, or he is a phenomenally good actor.

The most exceptionally brazen of these deceptions is what has happened over Northern Ireland. A few weeks before the 2019 general election, it seemed impossible that any Conservative politician could ever square the circle of Brexit and Northern Ireland.

The only other option was to agree to different customs arrangements for Northern Ireland and the rest of the UK and to put customs borders up within our country. In one of the greatest acts of political betrayal of all time, Johnson signed a protocol with the EU in which accepted the third option.

He agreed that Northern Ireland would be in a different customs arrangement to the rest of the UK in full knowledge that this would mean customs checks and paperwork for trade within the UK.

That agreement was signed in mid-October 2019. By early November, Johnson was telling the business community in Northern Ireland that they could rip up any paperwork because there would be “no forms, no checks and no barriers of any kind on goods”. The complete opposite of what he had just agreed.

Within weeks, his team had finalised a deal with the EU and with a great fanfare he announced he had ‘got Brexit done’. This was published on 24 December in the middle of a major spike in the pandemic.

It committed the UK to having those checks on goods moving between Northern Ireland and the rest of the UK that he had just told people in Northern Ireland to ignore. Either Johnson was deliberately telling different people contradictory or he was deluding himself with astonishing conviction.

As soon as the agreement came into force, reality began to bite. Suppliers found serious problems with the paperwork and checks that were necessary in order to move goods between Great Britain and Northern Ireland. Either they stopped making shipments or their costs went up. Businesses in Northern Ireland faced even greater difficulties.

Instead of addressing those problems, Johnson offered his usual false optimism. He told us all that with good will and imagination the temporary teething problems would get fixed. The fact that his own agreement had created a serious long-term problem didn’t seem to cross his mind. Riots on the streets of Belfast were the response of the nationalist community to this astonishing sell out.

The prime minister’s deceptions in his private life

Such an ability for self-deception has also been in evidence in Johnson’s private life for a long time. Being a divorced prime minister is not particularly unusual or problematic. Being divorced twice whilst conducting a string of affairs is more of an issue. It starts to raise questions about decision-making, poor judgment, and a person’s ability to maintain relationships.

What did he tell Petronella Wyatt whilst they conducted their four-year affair that resulted in a miscarriage and a terminated pregnancy? What was he telling Jennifer Arcuri as he conducted a four-year affair with her? Did Johnson care that his second wife was being treated for cancer at the time?

What did he tell his sick wife and their children whilst he was taking Arcuri on trade missions? How much public money did he spend on events that advantaged his mistress whilst he was mayor of London? What promises is he making now to his current fiancée?

When do private lies become a problem in a leader?

Politicians have a right to keep much of their personal life private. That is, until their behaviour becomes so appalling that it raises questions that go way beyond the personal. Questions about the honesty, integrity and judgment of our country’s leader.

There are those who believe that a few lies and a bit of personal deception don’t matter so long as the leader gets the important jobs done. When someone has a track record of personal and political deception on this scale, then they are incapable of getting the job done.

Johnson has too little contact with reality and too much focus on his own personal self-interest to be capable of running the country responsibly.

Only nine months ago, he wanted the nation to believe that his close personal adviser Dominic Cummings could be trusted to be at the heart of government. He gave him immense power and defended his grotesque misjudgements when he travelled to Barnard Castle at the height of the first wave of the pandemic.

Now all that’s changed and Johnson’s spin-doctors are telling us that we must dismiss Cummings’s allegations because he is not a trustworthy character. If he can’t be trusted, then why was he such an important part of government decision making for months?

If Cummings could be trusted, then surely we must believe him when he tells us that Johnson wanted to take money from lobbyists for the refurbishment of his Downing Street apartment? And if that’s true, what did those donors expect in return and how honest has our prime minister been about the sources of the money?

It is, of course, not easy to decide whether Johnson or Cummings is telling the truth. Because both of them are such practiced liars. But sooner or later, even the most shameless and professional liar gets caught out. By the awkward reality that facts don’t change just because a liar wants them to.