Boris Johnson himself has many similarities with reputedly the worst king in English history – King John. 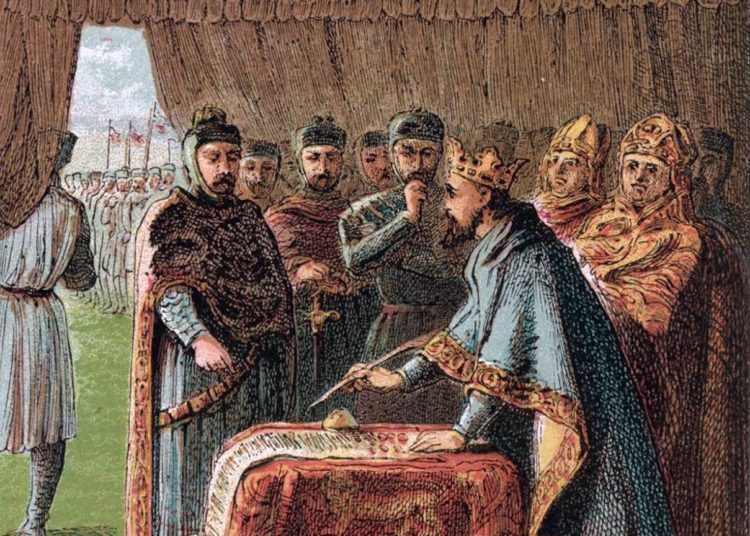 As Richard Corbett noted in his recent Yorkshire Bylines article – ‘The government’s attack on Magna Carta undermines the foundation of our constitution’ – the iconic Magna Carta is over 800 years old but still has analogies and resemblances to the present day.

Boris Johnson himself has many similarities with reputedly the worst king in English history – King John.

King John’s contemporary chroniclers were convinced he was a total disaster. Not surprisingly, there was never a John II. For well over a century after his death no one in the English royal family was even called John!

Let’s see some of the similarities.

King John offered only empty promises and lies that drove the English barons into rebellion. An example – he levied huge taxes to pay for a French war, then changed his mind, did not go, but kept the funding raised for his own use. A familiar U-turn there.

The Moonshot track and trace system has been described by a former World Health Organization director as, “waste/corruption on a cosmic scale”. Estimated at £200bn, comparable to the entire NHS budget, it was described by one critic as “a nonsense – no science, no feasibility, no evidence.” Johnson and Cummings refuse to give any details apart from the names of the private companies that will be profiting from this bonanza.

So, both Johnson and King John adroit at making empty promises that generate income.

When King John did eventually lead an army to France, faced by prospect of a possible battle, he timidly backed away from the enemy. Like Johnson, he was nervous of confrontation. Johnson refused to take part in television debates – for both the Conservative Party leadership and the general election – and interviews, most famously with Andrew Neil.

So, both fearful of confrontation.

Johnson squandered all his power and influence in Europe through misjudgment and indecisiveness over Brexit. King John lost the huge Angevin Empire, which had spanned much of France, even Normandy, once again through indecisiveness and misjudgment.

So, both men massively eroded England’s status and position in the wider world.

Like Johnson, King John was a notorious womaniser. Working out the legitimate and illegitimate offspring of either man is not easy. Both count their number of wives at two; the legitimate children born to those wives was five for King John and four for Johnson. Illegitimate offspring from affairs and mistresses are much less clear: Johnson refuses to clarify the situation, though two or three are known, and John had twelve! Whether Johnson has equalled or surpassed that number is unclear.

Yet like King John, Johnson is sickly (Cummings’ father has said Johnson is suffering the after-effects of the covid infection, and will retire at the end of this year). King John died of dysentery, alone and far from his seat of power, soon after Magna Carta.

The parallels between Boris Johnson and arguably the worst king in English history are very marked, but there is one more. The attempt to break the law and undermine Magna Carta.

Johnson has repeatedly tried to break the law – the Leave campaign’s electoral irregularities, illegally proroguing parliament and now the breaking of international law. He seeks to undermine Magna Carta, which enshrines the fundamental principle that the government is under the rule of law. King John’s autocratic ways are why Magna Carta was formulated in the first place.

So, both Johnson and King John sought to reverse Magna Carta, seeking dictatorial and autocratic powers.

In the chamber of the House of Lords, statues of Magna Carta barons stare down, a constant reminder of the importance of Magna Carta in controlling dictatorial leaders. And not for nothing does the Magna Carta frieze stand over the entrance of the UK Supreme Court in Parliament Square. The rule of law is the bedrock of our society.

One further fascinating point of similarity between King John, the worst ever king of England and Boris John-son. Currently Johnson seems to be set on ceding Kent to France, by making the Kent border our border with France. Lorry drivers will need special permits just to enter Kent.

In September Michael Gove announced plans to force all international lorry drivers to get an “access permit” to drive into Kent. One Tory MP stated, “Not satisfied with a dodgy border in Ireland, we are now getting one in England!”.

Freight organisations estimate that 50,000 customs agents will be needed to complete all the additional declarations. Leaked government documents estimate there could be queues of 7,000 trucks. The organisations complain that warnings to the government had not been heeded and requested support not given.

So effectively, the French border will begin at the Kent border.

800 years ago, King John’s failure to accept Magna Carta, that the King and therefore the government was under the rule of law, provoked the barons into seeking regime change.

If you can’t trust the king, change the king.

A delegation of barons travelled to France and sought the support of the French king. His son, Louis, had a claim to the English crown. As a result, with English baronial support, Louis invaded England in 1216. He captured much of Kent, including Canterbury and Rochester. He even entered London where the mayor paid him homage.

Then King John made his greatest career move – he died!

His young son Henry III became king, with astute advisers who immediately reissued Magna Carta. Despite this, it was to be the barons’ defeat at Lincoln which ended the war. Prince Louis was paid off and left England with his army. Kent returned to English control – until now, with Michael Gove’s proposals for turning it into an extended lorry park, with enforced border controls at its frontiers with London, Surrey and Sussex.

Magna Carta was to be reissued several times in Henry III’s reign. So low did the standing of the King fall, that Simon de Montfort took control and parliament was born. Henry III’s son, Edward I took back power, but soon sought arbitrary government once more.

Edward was forced to reissue Magna Carta in 1297 by descendants of the Magna Carta barons. This process of keeping the wily Plantagenets in check continued for centuries. The underlying structure of modern democracy was subsequently forged over many years on the anvil of Magna Carta.

The withdrawal agreement was in the Conservative election manifesto, so in defeating a proposed change in the agreement the House of Lords can justifiably keep on voting it down. The barons in action once again, defending Magna Carta!