Force majeure is a legal term to indicate unforeseeable circumstances which might provide a justification for breaking a contract. 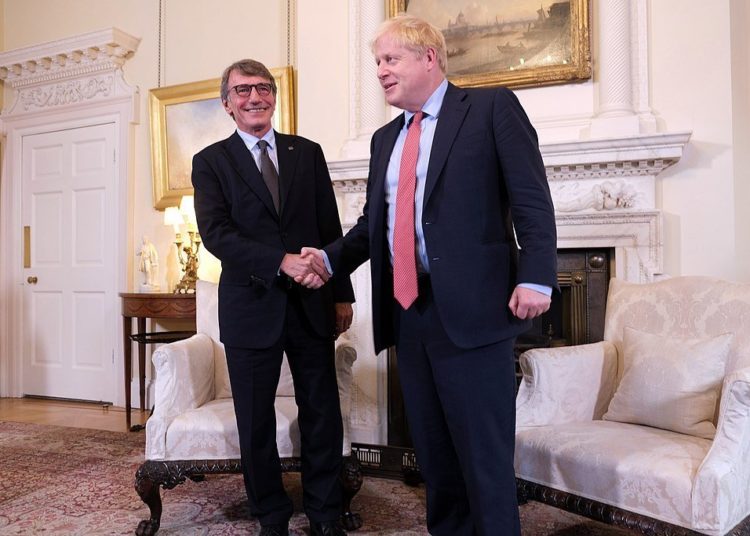 In what may be regarded as the ultimate in bad faith, last October – as the UK and EU teams were engaged in intensive final negotiations in Brussels – Johnson is alleged to have taken legal advice about repudiating the withdrawal agreement even before the text was completed. He was never committed to keeping the terms of the treaty.

This is according to a prescient blog post: Bad faith negotiation, written at the time by former British ambassador Craig Murray. On 15 October 2019, just a day before the withdrawal agreement was published, he wrote:

“There is currently considerable alarm in the [Foreign and Commonwealth Office] that Legal Advisers have been asked about the circumstances constituting force majeure which would justify the UK in breaking a EU Withdrawal Agreement in the future.“

Force majeure is a legal term to indicate unforeseeable circumstances which might provide a justification for breaking a contract. Murray said Johnson and Raab at the time appeared to be contemplating the idea of “agreeing a ‘backstop’ now to get Brexit done, but then not implementing the agreed backstop when the time comes due to ‘force majeure’”. [Our emphasis]

Murray was formerly our ambassador to Uzbekistan. He was forced out after he went public to expose torture being carried out by the Uzbek regime to obtain intelligence later used by the CIA. He subsequently became a political activist, human rights campaigner and whistle-blower, but retains contacts inside the UK Foreign Office.

“To negotiate an agreement with the secret intention of breaking it in future is a grossly immoral proceeding, and undermines the whole principle of good international relations.”

If the allegation is true, it would explain the government’s strategy and Johnson’s repeated denials that the Northern Ireland protocol would result in border checks and formalities, and would fit perfectly with Cummings’ known disdain for the law. The international treaty was simply a gambit to secure an election win by convincing a majority that it would get Brexit done.

The only thing afterwards was to decide the best moment to repudiate the agreement. Clearly, they have calculated that with trade talks stalled, now is the moment to try to apply pressure to the EU.

Instead, the UK government finds itself pushed into a corner, with four members of the US Congress signing an open letter to Boris Johnson warning of the consequences of “legally questionable and unfair efforts to flout the NI protocol of the Withdrawal Agreement”.

It is yet another sign that Johnson’s Suez moment is coming up. He is finding the notion of an “independent” Britain free of constraints and able to act unilaterally in global affairs is strictly limited. While the American letter will cut little ice with Dominic Cummings, many Tory MPs and peers will be distinctly uncomfortable with a clear breach of international law. The UK internal market bill may find its way to the statute book, but stripped of the controversial clauses overriding the withdrawal agreement.

If so, it will have been a spectacular own goal. Britain’s reputation for keeping its word has been irrevocably damaged, with nothing achieved except a worsening of UK–EU relations and demands from the EU27 for more effective guarantees and enforcement measures in any future trade deal.

Recent accusations from the UK side of the EU showing bad faith is a move worthy of rogue governments down the centuries accusing enemies of their own failings.

Brigid Laffan, an Irish political scientist and director of the Robert Schuman Centre for Advanced Studies at the European University Institute, has some wise advice for the prime minister – not to take on the EU in what she calls “lawfare”.

Laffan says the UK government opted for a ‘mad man’ rollercoaster strategy for the end phase of the negotiations, with the internal market bill driving a “coach and four through the Withdrawal Agreement which was accepted by Johnson, inserted into the Conservative Manifesto for the December 2019 election and subsequently ratified by this Parliament”.

She warns that if the UK wanted to attack the EU’s DNA and value system while still negotiating with it, “London could not have touched a more sensitive nerve”, adding that the EU is also a “power project”.  And with the law one of its main sources of power, the EU will “never give in to a UK government that so openly breaks the law”.

This is an important moment in British history, but made far more serious because the government is playing with fire in Northern Ireland, where the potential for sectarian violence is never far from the surface.