In another satirical sideswipe, Roger Winterbottom is shocked at the news that more than one woman finds Matt Hancock attractive, and wonders why the Met Police won’t retrospectively investigate whether Hancock has broken the law. Have they transformed into some kind of PreCrime unit, like in Minority Report? 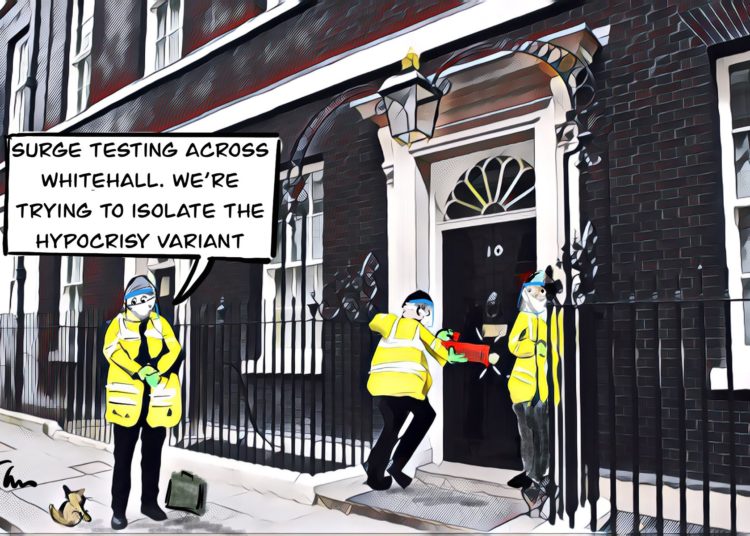 In his recent evidence to a select committee hearing, Dominic Cummings revealed that he had said early in the pandemic that, “we’ve got to get a grip of Hancock”. I doubt he was expecting anyone in the health department to take the advice quite so literally, yet here we are.

The Sun had somehow obtained CCTV footage of Matt Hancock engaged in a passionate clinch. OK, maybe not passionate, but it was a clinch. Or a grope at least. And it was most definitely not with his wife. Yes, this was the shocking news that Hancock has somehow found more than one woman who finds him attractive.

Cummings had also said that Hancock should have been sacked for lying 15 or 20 times during the pandemic, though I didn’t realise he was talking about the lies to his wife.

Hancock’s lover, Gina Coladangelo, is apparently an old university friend of his. It’s impressive to be able to stay in touch with old uni friends – particularly when you have such a demanding job and a family. I suspect being able to invent jobs for them and dole out wads of taxpayer cash to them at rates of a thousand pounds a day for ‘advice’ helps a little.

On first seeing the video of Hancock initiating his own version of eat out to help out, I wondered whether he was actually just taking on the Pepsi challenge. In a blind taste test, which does he prefer? Pepsi cola, coca cola, or Coladangelo?

Throw a protective ring around Hancock

The prime minister initially tried to throw a protective Hancock ring round the health secretary, with a spokesperson saying, “The prime minister has accepted the health secretary’s apology and considers the matter closed”. I’m sure we’re all grateful Hancock apologised to Johnson, though I suspect his wife might have appreciated one rather more. Johnson never seems to sack ministers for anything. What do you have to do to get sacked from government these days? Apart from showing signs of competency, obviously.

Rent-a-minister Grant Shapps was wheeled out to defend Hancock. “I think it’s a bit of a red herring” he said, while waving a piece of smoked fish at the camera. “The health secretary has been working very hard”, he continued. Indeed he has, Grant. Indeed he has.

I’m only surprised Shapps stopped short of suggesting Hancock change his name to escape the flak, as Shapps/Green/Fox himself likes to do on a regular basis.

The PM might have considered the matter closed, but not everyone agreed. Even Tory MPs were publicly saying Hancock should go after it became apparent that the CCTV footage was from a time when social restrictions were still in place, while Hancock was repeatedly telling the nation that hugging indoors was not allowed.

A few days after the event, Hancock had been on Sky News just prior to restrictions easing, saying that he planned to hug his father the next day but that “we’ll probably do it outside and keep the ventilation going”. There wasn’t much evidence of the same thing with Coladangelo.

Hypocrisy and the law

With the stench of hypocrisy becoming unbearable, Hancock finally resigned, saying, “I accept that I breached social distancing guidance in these circumstances”, which is quite the euphemism.

Tory MP Brandon Lewis appeared on Sky News to tell us that by resigning, Hancock had put his family first. I do hope his wife appreciates the sacrifice he has made for her.

As the furore continued, the Met Police said they wouldn’t retrospectively investigate whether a crime had been committed. What sort of crimes do they normally investigate? Future ones? Have they transformed into some kind of PreCrime unit, like in Minority Report?

Hancock was quite opinionated about Professor Neil Ferguson a year previously, who’d similarly transgressed lockdown rules with his lover. “I’m speechless”, Hancock had said, while proving otherwise. “It’s a matter for the police”, he continued. No doubt he would welcome the police similarly investigating him now. Though, since the police are now following Minority Report protocols, perhaps like Tom Cruise he’ll have to go on the run from PreCrime to prove that he wasn’t going to do the things that he’s already done.

If the police do get involved, I do hope Priti Patel makes an appearance, tweeting photos of herself accompanying a raid on Hancock’s flat. She could wear her special dressing-up uniform that says ‘Home Secretary’, while Hancock could wear his limited edition badge that says ‘Care’. Then Patel could oversee him being sent for processing somewhere suitable overseas – like Rwanda. It might appear harsh, but it’s the only sort of deterrent these criminals understand.

The Conservatives were quick to act upon the disclosure of CCTV footage, recognising the severity of video recordings of meetings in ministerial offices being leaked. The so-called ‘secret’ camera – the one that was hiding in plain sight on the ceiling, looking like a security camera – was ordered “to be taped up”. Phew! That’ll sort it. MI5 can stand down now – no need to look any further. The culprit has been found and dealt with.

Hancock was rapidly replaced in the health department by Sajid Javid, because finding someone with any sort of knowledge or background in healthcare is obviously impossible. Javid’s first comments on his health brief were that he wanted to end lockdown “as soon as possible” over fears of “the cost of shutting down the economy”, which suggests he may not yet have realised that he’s not the chancellor any more.

Meanwhile, Robert Buckland, the justice secretary, was asked on the Today programme about standards in public life and why Johnson hadn’t sacked Hancock. “A lot of people”, replied Buckland, “can’t get over the fact that [Johnson] is popular in the country and liked in the country and has won a resounding election victory”.

So that’s all right then, as Private Eye would say. Standards don’t matter to the Conservatives, because people vote for them anyway and they can escape any consequences. And speaking of ‘Escape’ – wasn’t that the Rupert Holmes song from the 70s?

And getting caught on a tape…”