TThe prime minister, already facing the twin peaks of the covid pandemic and Brexit, has just given the Scottish Conservatives another mountain to climb next May 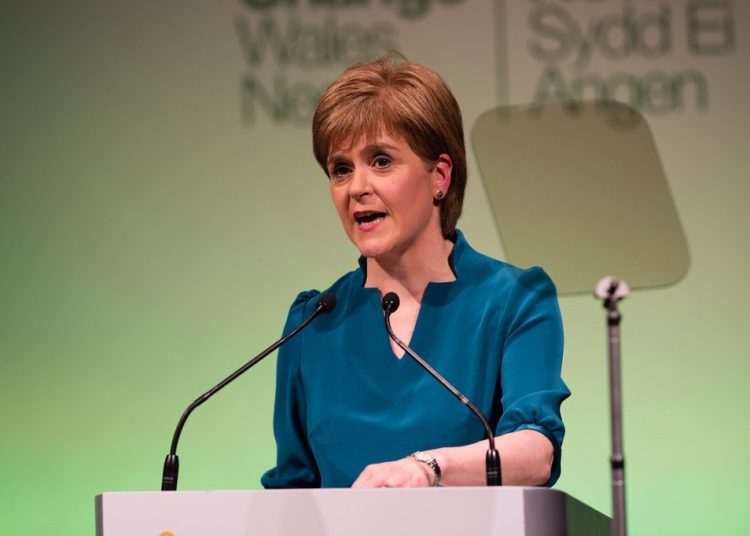 Image by PlaidCymruWales for Creative Commons

Boris Johnson is committed to the UK, even the devolved bits. We know this because this is what Robert Jenrick, the secretary of state for housing, communities and local government has been telling us. The reason he feels the need to remind us of this follows reports of Johnson letting his UK credentials slip during a virtual meeting with a group of his MPs. He reportedly said that devolution had been a “disaster” for Scotland and that granting devolution to Scotland, Wales and Northern Ireland had been Tony Blair’s “biggest mistake”.

The government is committed to treating the UK as one sovereign state. Brexit, strongly rejected in Scotland (62:38 percent voted No), applies to all parts of the UK. Some policies such as the furlough scheme are much more welcome, but there is no love lost between the prime minister and the first minister of Scotland.

Boris Johnson’s comments will be very welcome by the Scottish Nationalists north of the border. Ballot Box Scotland’s latest poll predicts that the SNP will increase its presence in the new parliament at the expense of the Labour and Conservative parties in next year’s Scottish parliamentary elections. An overwhelming majority for the SNP next May will further increase the pressure on Nicola Sturgeon to press ahead with a second independence referendum. This in turn will put more pressure on Johnson, testing his commitment to devolution to the limit.

Johnson’s problem is that he leads the Conservative and Unionist Party. During the first Scottish referendum in September 2014, David Cameron (the then leader of the same Conservative and Unionist Party) swung many in Scotland with the promise of continued EU membership if they rejected the uncertainty of independence and stuck with the UK. Scottish voters duly voted to remain in the union 55:45.

The ground has shifted somewhat since then. Boris Johnson has given the Scottish Nationalists a new raison d’être by winning the Brexit referendum and then the premiership, changing the economic and political environment completely. This is taking Scotland and the Scots into a future that they thought they had resoundingly rejected.

Then came his comments on devolution.

This was not the first instance of verbal incontinence the prime minister has suffered from. Richard Ratcliffe, the husband of the British Iranian woman Nazanin Zaghari-Ratcliffe who is currently imprisoned in Tehran, has said that Boris Johnson should take responsibility for his mistakes when he was foreign secretary. At that time, Johnson told a Commons committee that Zaghari-Ratcliffe was “teaching people journalism” in Iran, when in fact she was simply visiting her family. Her husband commented then that Johnson:

Although the consequences of Johnson’s latest gaffe are fortunately not as tragic as those that have failed the Ratcliffes since 2016, the future of the UK, and Scotland’s place in it, is nevertheless of huge importance.

Johnson makes a habit of always having an apologist ready to ride to his aid in front of the world’s media when he places his foot in his mouth. This time round that role went to Robert Jenrick, the hapless communities secretary, who said that Mr Johnson “always supported devolution”, telling BBC Breakfast:

“What he does feel strongly, and I would agree, is that devolution in Scotland has facilitated the rise of separatism and nationalism in the form of the SNP, and that that’s trying to break apart the United Kingdom’’

“Anybody, like the prime minister, who loves the UK, wants to keep it together, thinks that that’s a very, very dangerous and disappointing outcome that we need to battle against”.

But what Jenrick tells us Johnson “feels strongly” is very different to what the Sun reported he told the northern MPs on Monday. What he said was that “devolution has been a disaster north of the border”.

Nicola Sturgeon, who stands to gain much support from these comments, was quick to point out that, “The only way to protect and strengthen the Scottish Parliament is with independence”.

The prime minister – already facing the twin peaks of the covid pandemic and Brexit – has just given the Scottish Conservatives another mountain to climb next May. It remains to be seen how fit they are with six months to go.