Roller skating in lockdown in your 40s - the ground seems so much further away that when we were young! 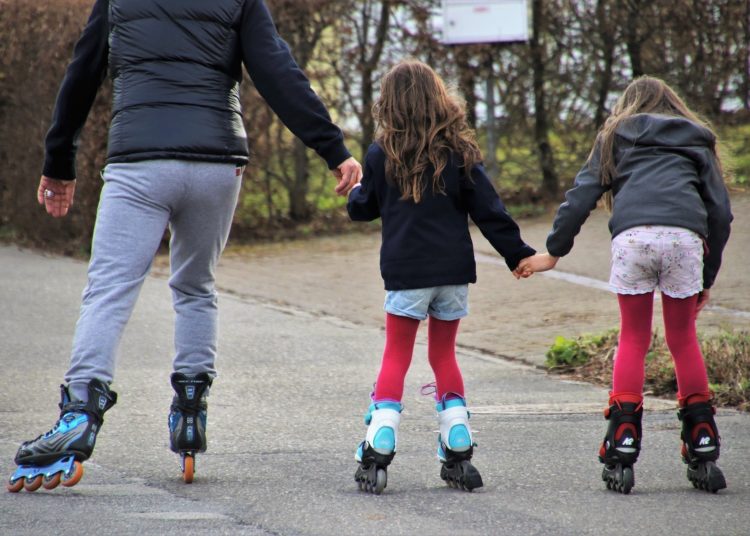 Image by pasja1000 for pixabay

Roller skating? Flashbacks to being a kid in the 80s. Bumping my yellow wheels over the cracks in the paving, my ponytail swinging as I yearned to be as cool as my older sister. Her skates were cooler, she was cooler.

Fast forward, three decades and here I am having another go. To put this into context, I have always done a lot of skating – just on ice instead. Growing up in Doncaster, I remember when they built the Dome there – a split-level ice rink where they even made it ‘snow’ – could anything be more glamorous? Ice skating was even on the PE curriculum at my comprehensive: finally a sport that I could enjoy!

Sport was never my favourite. I was always the kid at the back in PE, most likely in the wrong shorts. The one being picked last for teams; the one who never knew the rules of basketball. But skating was different. Just you, your skates and the unforgiving ground. I would skate up and down my pedestrianised street, the skates like anchors weighing me down, yet also setting me free. When you hit that smooth section of path, it felt as if you could simply fly away. But you get older, the skates get packed away, your life moves on.

But then along came the pandemic … Life stopped. Eating biscuits became an Olympic sport. We were all doing our constitutional walks, but in terms of getting my jeans on and buttoned up, walking on its own was never going to cut it. Idle chatter amongst my friends, as we moaned about our lack of fitness, revealed an bashful longing to go roller skating again.

Of course, we had all skated as kids, but could we still do it now? No one wanted to splash out on brand new skates, so we trawled the web. And no longer being kids made of india rubber, we also needed kneepads, elbow pads, wrist supports and even helmets before we could consider putting wheel to tarmac.

I remember sitting on the front step as a kid, my only worry being that I might scrape my knee and possibly get blood on my best t-shirt. Now? what I was about to engage in was reckless.  What if I fell and broke my hip? Or an arm? Who was going to make the children’s packed lunches and carry the wash basket up and down the stairs if I was injured? Would there be sneering or disdain at the hospital as I explained the circumstances of my broken bones? After all, what was I, a woman of over forty doing thinking that she could still roller skate like the kids? Surely cocoa and slippers would be the sensible path..

So we packed up all our skates (and body armour) and set off for the park. It was harder than we remembered. The ground seemed so much further away and the fear of serious injury clung to us as we tentatively took those first few steps. Now, as I said, I have ice-skated since being a kid and I even tried rollerblading a few years ago. Being back on traditional quad skates was a whole different experience.

Every twig and pebble was a log and boulder in our way, an obstacle designed purely to get stuck in our wheels and send us tumbling to the tarmac. One lap of the car park took forever. I found that I could only seem to travel in an anti-clockwise direction. We travelled so tentatively that it could scarcely be called skating at all. My desire to go fast was curbed by my terror of being unable to stop. Often I simply collapsed onto the grass at the side when I realised  I needed to brake.

According to Closer Online, roller skating can burn up to “600 calories and hour. It’s a complete aerobic workout, involving all of the body’s muscles, raising your heart rate and keeping you fit”

However, after about forty-five minutes of terrified stumbling and arm flailing, we stopped and could skate no more. Our feet were throbbing, our legs were shaking and our back and abdominal muscles ached from all the frantic clenching as we desperately flapped our arms for balance.

We sat there on the grass in the sunshine, smugly looking down at our roller skates. Physically we had done quite a work out, but it was the mental high that we enjoyed now. We had been afraid, physically and mentally, but we had done it. We were slow and clumsy, but nothing could beat the satisfaction of having managed it: we were skaters!

So, it really is worth having a go. If, like me, you are not keen on sports generally, then roller skating is a great compromise. Getting yourself strapped into all your safety padding and taking those first wobbly strides is the hardest part. But before you know it you are immersed in the feel of the ground beneath your wheels, and in maintaining your balance all those other worries just drift away.

We had had our fair share of witnesses to our efforts. There had been the teenagers who just stood and stared. The little kids on bikes who had whizzed past us making us feel twice as old and cumbersome. Yet, it was the response from the adults that was so positive. Most would look on curiously at first, watching as we laughed and staggered over the tarmac. If anyone spoke to us, it was to say how much they enjoyed skating when they were a child.

I wonder if any of our trips to the park have inspired anyone else to dig out an old pair of skates from a loft or garage, that maybe they had a tentative scoot across the kitchen when no one else was home. I do hope so.