The DHSC bypassed normal tendering processes to place a series of single-bidder contracts for PPE with a variety of suppliers, citing “genuine reasons for extreme urgency” caused by “unforeseeable” events ... 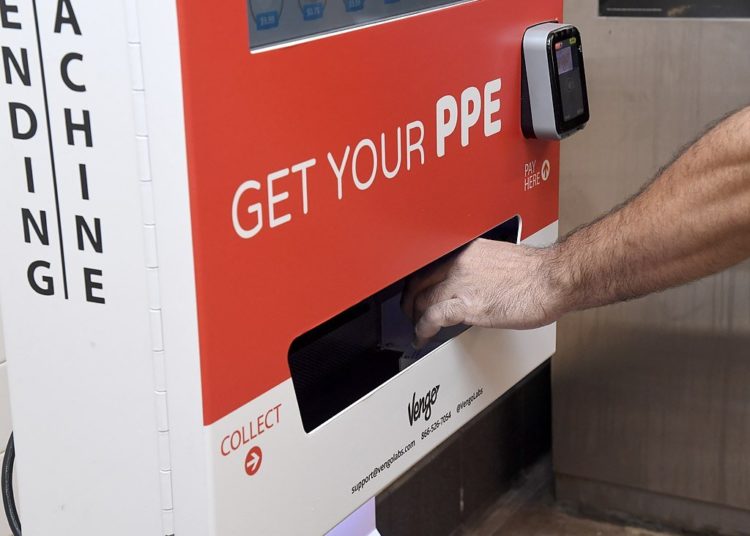 Metropolitan Transportation Authority of the State of New York from United States of America / CC BY (https://creativecommons.org/licenses/by/2.0)

As the awful spectre of the Covid-19 pandemic was finally dawning on Boris Johnson in the third week of March, it was clear that hospitals were about to be inundated with patients and there would be a vast need for personal protective equipment (PPE) on hospital wards and care homes. This was well before he announced the lockdown on 23 March.

Sir Patrick Vallance, the chief scientific adviser, was saying on 17 March that we would be lucky to get away with 20,000 people falling victim to the coronavirus. But at the beginning of April the Department of Health and Social Care (DHSC) was forced to begin placing the first of a series of single-bidder contracts for PPE, citing “genuine reasons for extreme urgency” caused by “unforeseeable” events. This despite the pandemic spreading inexorably across Asia, Europe and the rest of the world for several months already, with Britain suffering its first case at the end of January.

On 1 April an order for £10m was placed with Medco Solutions Ltd, a London-based company that apparently only incorporated on 26 March, three days after lockdown, with a share capital of just £2. It was the first of over sixty such contracts placed with a variety of suppliers, some quite unusual and under emergency rules, bypassing the normal competitive tendering process that ensures best value.

Let me say clearly at the outset, I do not believe this is necessarily a story of wrongdoing or corruption on the part of anyone in any of the suppliers or the DHSC.

I suspect the companies saw an opportunity to help the NHS and make money for themselves and their shareholders and did so. The failure at the top of government to anticipate and prepare for an unprecedented increase in the need for PPE made the bypassing of competitive tendering inevitable.

Details of all these contracts can be found on the EU’s TED (tenders electronic daily) website. It’s easy to use – just enter “garments for biological or chemical protection” in the search box. Of the 117 single-bidder contracts for protective garments under code 35113410 that were showing on the website when this research was done, 65 or so totalling about £980m were placed by the DHSC from 39 Victoria Street, London between 1 April and 26 May.

The pace of contract placing stepped up through April as hospitals and care homes began to complain of a desperate shortage of PPE. A number of clinical staff had to use bin liners in place of gowns. While some contracts were given to established UK manufacturers like Polystar Plastics, a Southampton-based company with significant assets who received an order for £25m, many and much larger orders were placed with companies that appeared to have little or no history or experience in personal protective equipment. At least two appeared to have been dormant businesses a few months beforehand.

Initia Ventures Ltd, providing business support service activities, filed accounts for a dormant company in January this year but received an order for £32m on 2 April and a second for £16m on 25 April.

Tower Supplies in Poole, Dorset – an established provider of PPE – won a £20m contract, which seems reasonable. Others had a connection, sometimes tenuous perhaps, with the medical supplies industry. But many, like Bristol shoemaker Toffeln Ltd who won a £1.1m contract for PPE on 4 April, had seemingly never supplied any PPE whatsoever in the past.

Monarch Acoustics Ltd of Nottingham, makers of shop and office furniture according to Companies House, received a £28m contract for PPE on 19 May.

Some recipients of large multi-million pound contracts had recently filed accounts for micro businesses meaning they had a turnover below £316,000 and 10 employees or fewer.

One such was Medicine Box Ltd of Sutton-in-Ashfield in Nottinghamshire. They were handed an order for £40m on 25 April, despite having assets of just £6,000 as recently as March this year.

Uniserve Ltd of Essex describes itself as the UK’s largest privately owned logistics and global trade management, and it is indeed a substantial business, but it is hard to see what experience it had in supplying PPE. Nevertheless, they received five contracts amounting to £186m between 14 and 23 April including this one for £86m. Uniserve’s website says, “It’s with great pride that Uniserve have been drafted in to assist in the management of the UK supply chains for Personal Protective Equipment (PPE)”.  But they seem to have transformed themselves from managing the supply chains to becoming a supplier as well.

One company, MGP Advisory (described as a venture and development capital business), appeared to be in danger of being struck off the companies register for failing to file accounts but was rescued by a contract for £825,000.

Jolyon Maugham QC uncovered the first such single-bidder contract with Pestfix Ltd, a tiny pest control business in Littlehampton, who found themselves with a £108m order for PPE on 10 April this year. The company is actually Crisp Websites Ltd, but trades as Pestfix Ltd and in November 2019 they had net assets (assets minus liabilities) of just £18,047. Their website says “PestFix Pest Control Supplies is a distributor of both professional and amateur use pest control products – including PPE.” The last two words have been added sometime between 15 and 22 June 2020, according to Wayback Machine web-archiving service.

This was a few days after Maugham broke the story on Twitter. He then revealed that Clandeboye Agencies Ltd, a confectionery wholesaler in Co Antrim, had received two contracts – one for £14.28m on 28 April and a second for £93.24m on 18 May. Next, Maugham revealed that Aventis Solutions Ltd of Wilmslow, with just £322 in assets, won a contract for £18.48m on 12 May. The biggest contract of all was placed on Ayanda Capital Ltd, a financial business, which was given an order for £252m at the end of April.

Our friends at Byline Times found that Luxe Lifestyle Ltd in Richmond had an order placed for £25.78m on 28 April. However, Yorkshire Bylines can now reveal this was just the tip of the iceberg.

The reason for not complying with the competitive tendering rules is the same in each case as far as I can see. The DHSC says:

“In March the NHS experienced severe shortages of PPE, modelling based the trajectory of other European countries forecast the need for significant and extremely rapid increase in the UK PPE capacity. Similar shortfalls in PPE stocks were identified globally. There was immense demand for PPE, requiring the UK government to actively seek and create new supply chains rapidly to meet that demand. In these circumstances, a procurement following the usual timescales under the PCR 2015, including accelerated options, was impossible. PPE manufacturers and supply chains were under immediate and unprecedented global pressure to provide products.”

But other countries, Italy for example who had far more reason to claim the pandemic was an “unforeseen” event, only had to resort to single bidders orders on 11 occasions. Spain did the same twice and Germany, with the second-highest number of single bidder contracts, placed 17 in total.

Britain is the exception. Despite having had two weeks of advanced warning of what was happening in Italy, the UK used the single-bidder emergency procurement process over 60 times between 1 April and the end of May, with 46 different suppliers. It is perhaps yet another area where Britain’s performance under Boris Johnson can be described as world-beating.

Mr Maugham is pursuing legal action on the orders for Pestfix Ltd and Clandeboye Agencies, but it’s not clear whether there was any wrongdoing as such. It has simply been a policy failure at the top that forced the DHSC to act quickly to source PPE from wherever they could and at whatever price. The suppliers used their contacts and networks to find agents and suppliers who could deliver the PPE quickly and it seems this is exactly what happened.

Yorkshire Bylines is still interested in how payments were organised and if the suppliers or taxpayers money were ever put at risk.

We asked if supplying PPE was the new Klondike. On this evidence, perhaps it was.

Superforecasting: essential for good government or the latest fad?