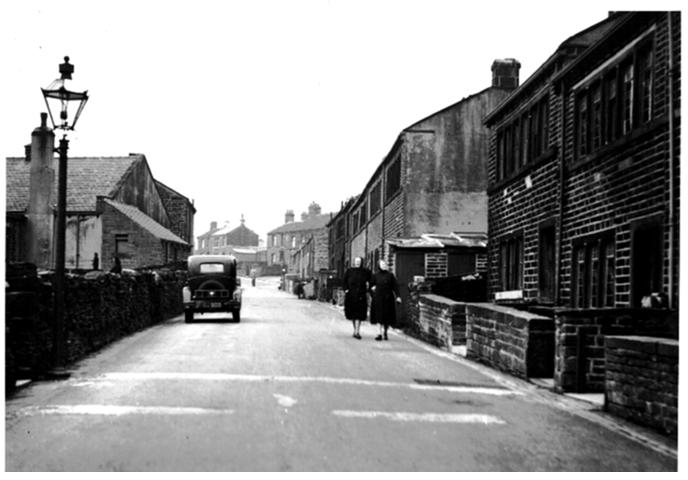 You can catch up on his ramblings so far HERE.

To me, Colne Valley High School was huge. It was a brand new, state-of-the-art school, designed for 1,800 pupils aged from 11 to 18 years. The facilities were gobsmacking.

Things like a large and a smaller theatre, a music department, three gymnasiums with athletic tracks, football and cricket pitches with nets, tennis and netball courts, science labs, home economy classrooms with a domestic science flat, purpose-built art rooms, woodwork and metalwork workshops, a natural history department with a few pigs and chickens, a tuck shop where we could get sweets and crisps during our dinnertime breaks. And last and by all means (in my case) least, there was an excellent library.

I had no idea that a place like this existed. All of this was available to me, a young lad who had just come from a school where we had fairly recently used chalk and slate to write on because some items were ‘temporarily unavailable’ (and when we did have our normal writing equipment it was an inkwell and pen … I seemed to produce lots of ink blobs of varying shapes and sizes … I believe they were later used in psychiatric analysis).

The school was opened in 1956/7, just two years before I was old enough to attend. It was not yet fully finished in 1957, so for the next two years there was room only for some 13 and 14-year-old pupils. By 1958, the school was open for younger pupils and I was among the first 11-year-olds to attend.

At 11 years old, I was quite comfortable being naked within the family environment, but when we did PE (physical education), we had to use the communal boys’ showers. Not only was it the first time I had used a shower, it must have been the first time I had even seen a shower. It was also the first time I had seen other boys without clothes. We all took discrete opportunities to check everyone else out, to make sure we had nothing that was unusual (after all, we couldn’t trust our mums to tell us). I don’t remember seeing anything odd and everything eventually settled into the normal routine.

We were all boys and the PE teachers (all male) made themselves scarce when we were getting changed, except when they came back in to shout at the slowcoaches. Then the day came when a female PE teacher had to take our class. I remember feeling horrified that a lady might see my naked body and she’s wasn’t my mum. Suffice it to say we were all out of that shower and dressed in 30 seconds flat!

There were some notable characters within the teaching staff in those early Colne Valley High School days, none more so than the legendary Albert Marsland. Even into adulthood, the blood of his former pupils would run cold when hearing the name Mr Marsland. Despite his small stature, he was an enforcer of firm discipline. One of his favourite weapons was the plimsoll (rubber-soled footwear used in PE).

A story that was passed down from pupil to pupil – though I didn’t witness the incident myself – concerned an unfortunate child receiving a ‘damn good thrashing’ with said plimsoll in Mr Marsland’s office. The lad decided he had taken as much as he could stand and made a bolt for the door, but Mr Marsland hadn’t finished with him yet and pursued him all the way down the corridor, whacking him mercilessly about the body with the plimsoll.

During morning assembly, Mr Marsland would strut along the front of the stage while some of his colleagues were taking their seats behind him. He would glower down at the assembling masses in the body of the hall and tap the microphone every time he passed it. I’ve often wondered what his colleges must have been thinking; perhaps they thought the world of him and wished they had the same confidence and nerve to beat unruly brats to a pulp. I have read that some admired his sense of humour.

Mr Marsland reminded me in appearance of Mussolini, the Italian dictator who ruled from 1922 until 1943. I’m sure Mr Marsland in fact modelled himself on Mussolini. He seemed to have the same look and characteristics that I saw on the old newsreels. Anyway, while Mr Marsland was doing his strutting at morning assemble, he would appear to occasionally chew something. I would imagine it to be a part of an internal organ that he had been saving in a corner of his body somewhere for special occasions. He was hypnotic: we dared not take our eyes off him.

One of the strictest rules within the school at that time was that running was verboten. In my youthful exuberance, I was once running down the library corridor when I passed a group of boys coming the other way. Hidden amongst these boys was Mr Marsland (because of his short stature I hadn’t seen him). When I got alongside him, he shot out an arm and grabbed a handful of my hair. The timing was excellent: my head stopped instantly but the rest of my body carried on, my legs shot into the air and I came crashing down on my back with a splat.

When I eventually opened my eyes, Mr Marsland was looking down at me, reminding me in his scary sort of way that I had broken one of the school’s cardinal rules. I noticed that a handful of my hair was sprouting between the fingers of his fist as he was shaking it in front of my face. He must have been impressed with my double gainer with a full twist though, for he had a slight smile in the corner of his mouth. I had never noticed this facial feature on him before, perhaps that was what his colleagues meant when they said he had a sense of humour.

I bumped into Mr Marsland in a drinking establishment in Huddersfield a few years after I had left school. He was wringing the neck of a one armed bandit (a type of fruit machine popular at the time). I was a cocky, know it all, confidant young man and I looked at Mr Marsland for some time wondering why was I still scared of this little man carrying out a very mundane task. I’m sure he would have reminded me if I’d had the nerve to approach him and ask, but I didn’t.

Even now, after more than 50 years, when ex pupils get together we will each have a frightening story to tell of Mr Marsland and an extra comradeship will develop – almost like old soldiers recalling common battles. Someone will eventually say, “How on earth did he get away with it?”

It seems strange to say but I have a soft spot for Mr Marsland. I’m sure he would turn in his grave if he knew that one of his ex pupils thought that, but he was fair and impartial – he hated everybody in equal measure (unlike Mr Anothersadisticb’stard and Miss A. Sourpuss, who were vindictive and vicious and I am sure must have taught hundreds of their pupils to be the same).