Johnson continues to use the 'whack-a-mole' analogy to explain his strategy. It may explain where the government is going wrong. In that game the mole just keeps reappearing but in different holes. 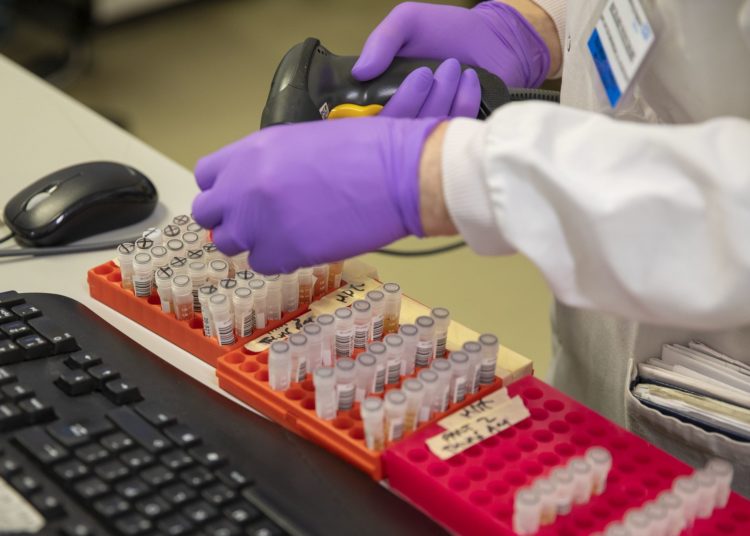 Coronavirus testing laboratory in Leeds by HM Treasury is licensed under CC BY-NC-ND 2.0

As Leicester goes into lockdown again it appears that key questions remain unanswered: when did anyone know that there was a problem, and who was told? Local MP Jonathan Ashworh said on Monday, as the lockdown was announced, “We were alerted to the situation in Leicester 11 days ago and now we’ve got tonight from the secretary of state the whack-a-mole strategy.”

So what happened to those 11 lost days for Leicester and what does it say about the robustness of Boris Johnson’s whack-a-mole strategy? How confident can we be that the government knows what it is doing and what lies ahead for other areas of the country that see similar spikes in cases?

This afternoon, Keir Starmer started prime minister’s questions by asking why Leicester authorities were not given the full data on local infections until last Thursday. In reply, the prime minister claimed this was not the case, stating that all pillar 1 and pillar 2 data had been shared with local authorities. Starmer then referred the prime minister once again to the evidence, saying he had spoken to the mayor of Leicester who was absolutely clear the information was not made available until last Thursday.

In a time of crisis, trust is paramount. Timely and effective sharing of knowledge and information is essential. Those who are dealing with the crisis at the coalface need accurate and timely information to inform their decision-making.

The prime minister is being disingenuous. As I wrote in yesterday’s Yorkshire Bylines, concerns had already been raised about the lack of communication and appropriate data sharing between the city and the government. Dr Jon Bennett, respiratory and general medicine physician at Glenfield Hospital in Leicester and chair of the British Thoracic Society board, confirmed this with his tweet yesterday:

The issue with the lack of communication was compounded when Leicestershire Police Federation chairperson Dave Stokes admitted to Sky News last night that the local force didn’t know how it was supposed to enforce the local lockdown in Leicester. He said:

“We don’t know. And that’s simply because we are waiting for the government strategy and the legislation, which will obviously support us locally about how we are going to police it. It’s a moving picture and I’m sure the information will be fed down but at the moment that clarity isn’t there.”

Pillar 1 tests are carried out by public sector laboratories. This is the NHS Covid-19 swab testing for those with a medical need and for critical workers. Pillar 2 tests are outsourced to those private sector laboratories who can develop and deliver commercial swab testing. The system is coordinated by Deloitte and includes all the tests from the Serco drive-through testing stations as well as the testing completed in care homes. Pillar 2 testing makes up the majority of tests now.

The reason for such widespread concern is the fact that the UK government’s published numbers of new cases at local authority level only include pillar 1 and not pillar 2 cases. This according to John Burn-Murdoch, who does the stats and a daily coronavirus trajectory tracker for the Financial Times, is vital. He explains that this means as many as 90 per cent of new cases are missing from the data. The government is sitting on a much more complete dataset including pillar 2, which tells a very different story.

Two months ago, most cases were found under pillar 1, so not publishing pillar 2 wasn’t a huge deal. Now it is. In Leicester, more than 90 per cent of new cases are under pillar 2, yet these numbers are not publicly available. And it is not just Leicester – it is also a particularly big problem in the East Midlands and in Yorkshire and the Humber, where pillar 2 accounts for the highest share of new tests and cases.

As Burn-Murdoch explains, full pillar 1 and 2 data is being shared with local public health bodies but not with councils, MPs or the public, who are therefore only seeing a tiny share of new cases and risk being blindsided by a second wave. But Dr Duncan Robertson, academic at Loughborough University’s school of business and economics, says the data has only been released to directors of public health in local councils very recently – and even then only to those that have signed a ‘data protection record’.

This explains the problem and exposes the deficiency. Pillar 1 can pick up spikes in hospitals but crucially it does not pick up community outbreaks. The only source is Public Health England’s surveillance report – the latest being for the week ending 25 June 2020.

Last Thursday, the government launched a new coronavirus data dashboard, promising it would be updated daily. But so far it is showing woefully incomplete data, amounting to less than 5 per cent of new cases in some areas. At the time of writing, it shows that there have been no hospital admissions since 16 June.

The decision not to publish this pillar 2 data was a government one, taken at ministerial level. In a written answer to a parliamentary question from Stella Creasy MP on 11 June, Nadine Dorries (who is ironically the minister for mental health, suicide prevention and patient safety) confirmed that the contract for pillar 2 testing does not require Deloitte to report positive cases to PHE and local authorities.

Beleaguered directors of public health are doing their best under exceptionally difficult circumstances. Their local outbreak plans – designed to clarify how local government works with the NHS test and trace service – are pretty comprehensive. The public health directors are responsible for developing and overseeing these plans. But as reported on Newsnight last night, some directors of public health are angry that they are not getting real time data about local covid cases. And information is still not reaching those in leadership roles. The leader of Telford and Wrekin Council, Cllr Shaun Davies, tweeted on 27 June:

It is essential that we establish local control of testing capacity by increasing the number of accredited NHS laboratories. Directors of public health need access to individual level, real-time testing data if they are to do their jobs effectively and keep the public safe. There is a real risk that expanding the number of mega-labs would simply exacerbate the data-sharing problems evident in the UK’s testing programme.

Good and timely local data will mean that there can be prioritised testing for high-risk populations and active case finding. More use should also be made of the great local knowledge and networks that already exist within our communities. There are thousands of mutual aid groups up and down the country, many of which have networks and contacts down to street level. It is a huge resource that is currently being overlooked with the track and trace system.

Boris Johnson continues to use the analogy of the children’s game whack-a-mole to explain his strategy to tackle coronavirus in our communities. It may explain where the government is going wrong. In that game the mole just keeps reappearing but in different holes. Today Leicester. Tomorrow Barnsley. Or Doncaster.

This is not a game, this is people’s lives; and the sooner the government gets to grip with what is needed at local and regional level the sooner we may all be able to get back to some semblance of normal.