John Heywood delves into the history of Withernsea pier, finished being built in 1877; an awful storm was to damage vessels on the pier, and four sailors were killed. The Genesta disaster was also relentless and destroyed 300 feet of the pier. 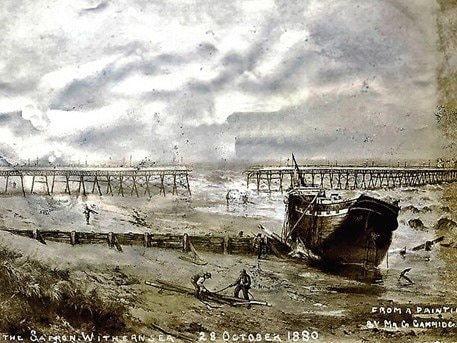 For many Victorians, a promenade on a pleasure pier was one of the highlights of a visit to the coast. For corporations and the local business community it was a chance to highlight their prosperity, their plans and optimism for the future and hopefully capitalise on their investment. One of the last two piers to be built in Yorkshire, (there were once six!) was in the south of the region at Withernsea.

The coming of the railways had opened the town up for development. The Withernsea Pier, Promenade, Gas and General Improvement Company was formed with a commitment to erect a pier in the town, the entrance of which would be situated half-way along the promenade. This, along with the rest of the development never got off the ground. New plans were drawn for a pier to be built opposite the railway station. This was situated further to the south of the town, with Thomas Cargill, who had previously designed the pier at Aldeburgh in Suffolk, as the engineer and J O Gardiner as the contractor.

Despite some damage during its construction, the 1,196-feet-long pier was completed by August 1877. Built entirely out of iron, except for the brick entrance and wooden decking, the pier used the new technology of screw piles, which were driven deep into the ground. Seating was provided along the full length of the pier and a saloon and hall for entertainment was situated at the pier head. The entrance to the pier consisted of two castellated towers, rumoured to be based on Conwy Castle in Wales.

Upon opening in August 1878, the pier quickly became profitable. The one penny admission charge ensured that it was accessible to all and not just a select few. Excursionists, especially from nearby Hull, flocked to the new attraction. Unfortunately, the success of the pier was to be short-lived.

On 28 October 1880, a devastating storm erupted which caused damage to many of Yorkshire’s piers. Withernsea Pier suffered twice when it was hit by two storm-damaged vessels. The fishing smack Jabez, operating out of Colchester, hit the end of the pier, sinking with the loss of the four men on board. Three of the four sailors were buried in Saint Nicholas Churchyard in Withernsea, with the fourth buried at nearby Holmpton, where his body had been washed up on the shore. The Withernsea memorial to those brave sailors reads:

“Sacred to the Memory of GEORGE KETTLE AGED 41 YEARS, GEORGE FITCH AGED 21 YEARS, WILLIAM CANT AGED 18 YEARS, ALSO JAMES JOHN LAMB AGED 33 YEARS WHO IS INTERRED AT HOLMPTON, NATIVES OF COLCHESTER WHO WERE DROWNED IN THE STORM OF OCTOBER 28th 1880”

The second vessel to hit the pier was the brig Saffron, which tore a 200-foot hole through its centre before coming to rest nearby. The Saffron had been part of a flotilla of ships which had set out from the Humber, journeying northwards. Around Flamborough Head, the wind increased rapidly to a storm force gale. The fleet was at the mercy of the elements.

The Saffron’s captain made the decision to head back to Hull, but its sails were torn away in the fierce winds and lashing rain. The boat was pulled further and further southwards and nearer to the coast, crashing into the pier in the early hours of the morning. Having lodged against a groyne, the crew bravely sat out the storm until first light when they lowered a ladder and walked to safety.

The pier had only just been repaired when it was damaged again on 28 March 1882, the pier head being destroyed along with the saloon above it. The pier was not repaired, but the remaining sections continued in use.

The Genesta disaster and the end of Withernsea Pier

The series of disasters was relentless, and on 20 October 1890, the Grimsby fishing smack Genesta hit the pier, destroying over half its length and leaving just over 300 feet remaining. The story began at 4 o’clock on Sunday morning when the Genesta came aground at Waxholme, near Withernsea. The horrific events were graphically portrayed in the York Herald.

“When the vessel struck, the third hand was on watch, the captain, Henry Hill, having just gone below after being on deck nearly all the night. Tremendous waves broke over the vessel and the crew had to take to the rigging, this being their only place of safety. Here they remained until 6 o’clock suffering intense agony from the extreme cold, when they were espied by the Coastguard.

The Officer shouted at them to keep up their courage, and immediately ran to Withernsea for assistance. The rocket apparatus arrived about 6.30, and was instrumental in landing the crew, with the exception of the captain, who had died owing to the terrible cold, and whose corpse was hanging in the rigging.

One who was at the scene of the wreck describes it as one of the most distressing and heartrending scenes ever witnessed on the Withernsea coast … When rescued the crew were numbed with cold and it was pitiful to see them look up and thank their deliverers.”

The Genesta had escaped the ravages of the storm unbroken. It was quickly bought by a group of local businessmen. Before they could protect their purchase, a further storm carried the unmanned vessel up the coast to Withernsea where it crashed into the pier leaving just 300 feet remaining. Two years later even this was destroyed, when another vessel, the Henry Parr (formerly the Dido) rammed into it at the height of another storm.

The remains of Withernsea pier: a landmark and memorial

The history of the pier at Withernsea is both tragic and yet in some ways inspiring. The two entrance towers have survived all the devastation around them. They are a well-loved landmark in the town, even if many visitors are totally unaware that they once formed a part of a pier. They also act as a memorial to those sailors who perished in the seas around it.