Pie of the week: from the Yorkshire Sculpture Park

Jimmy Andrex reviews the pie of the week – this time from the Yorkshire Sculpture Park. 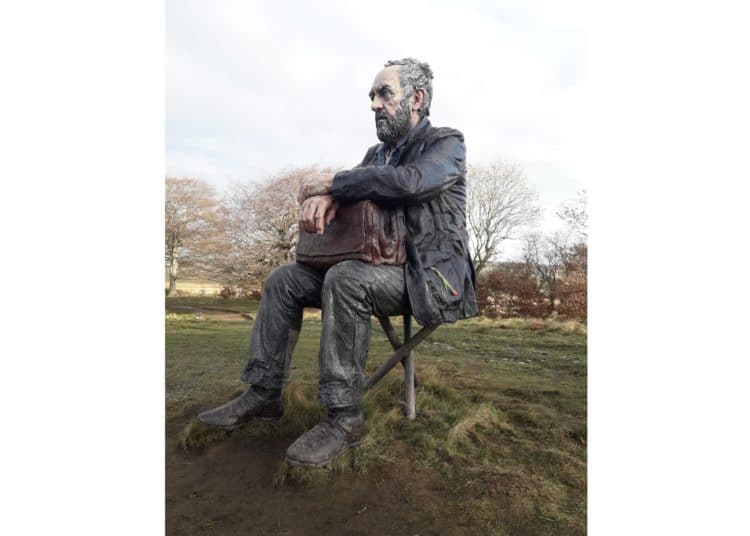 It is not for me to compare myself to Marcel Proust. However, given our circumstances, what is a pie reviewer to do? At the beginning of March, when it was dawning on everyone except the prime minister that something terrible was upon us, we went for a walk round the Yorkshire Sculpture Park (YSP to its friends). It was clear we wouldn’t be round there again for a while.

Our Marcel, whom I’m sure could have got a chapter or twelve out of a good pie, wrote his masterpiece In Search of Lost Time prompted by dunking a Madeleine biscuit in his auntie’s tea. He wrote it as a refuge from life-threatening asthma, at a time of social upheaval during the Third Republic and fears around people discovering his sexuality.

At the end of our walk, seeking refuge from a grim sense of foreboding, I greeted the news that my favourite pie – steak, ale and Henderson’s Relish – was on the specials board with the same relief as when I heard about the Oxford/AstraZeneca vaccine. Even now, I envisage myself, in black and white on the platform at Ampleforth Station, saying goodbye to its crusty-but-yielding gorgeousness like Trevor Howard did with Celia Johnson in Brief Encounter.

Our memory of smell and taste, an evolutionary leftover, is more powerful than mere words and, when I summon up that memory, the scene around me is recreated in colour: the fab Damian Hirsts down near the Weston; people scraping mud off their unsuitable-but-edgy footwear; the right-on recyclable tubs for the ketchup.

You’d expect this to bring on contingent feelings of grief, but actually, the memory of the blend of meat, beer and Hendo’s can evoke something related to grief, but deeper: joy. Often confused with the blunt vagueness that is happiness, joy is something more complex and distinct.

Legendary DJ John Peel, would famously break down in tears whenever he heard The Undertones’ ‘Teenage Kicks’. He was nearly forty when he heard it and many biographers have commented that his reaction wasn’t prompted by a longing for a lost youth of freedom and romance, quite the opposite; as a former boarding school inmate and national serviceman, he was crying for a past he’d completely missed out on and was already too old to recapture.

Joy, however, is not bitterness. It is an acceptance of the mismatch between our hopes and reality at the points where the two occasionally intersect.

The YSP is a beautiful place. Mrs Andrex and myself often yomp up to the highest point and my current favourite sculpture, that of the giant bloke on the bench looking towards Emley Moor. The first thing that gets you is the scale: he’s bigger than you first thought. Then it’s his eyes: he’s weary, possibly at the end of his rope. His briefcase is folded across his lap, like he’s escaping from work or sitting in the cold on Leeds Station contemplating getting on the train to Blackpool, Hull or Scarborough and just packing that job in forever. Looking at him made me wonder which one he was; which in turn made me wonder which one I was.

Whatever the answer, and whatever emotional response we may have had, the trip up to see him is always enhanced by descending back towards the café in the hope that their steak and Henderson’s pie might be on the specials board. The day in question, there was also treacle tart, but that’s another story. On a normal day, it would have seemed life couldn’t get any better. On that day, when our brain didn’t contain many specifics but our gut had foresight in abundance, the pleasure of the pie in a context of impending disaster turned it into something to be savoured and enjoyed like never before.

Notice the word at the heart of ‘enjoyed’.

People faced with life-threatening illnesses often speak of suddenly becoming aware of the joys brought about by mundane things often overlooked: sunsets, smiles, a simple walk round the block. Clearly, though we’re often urged to live each day as our last, keeping up that level of intensity would probably kill us anyway. Still, it doesn’t do any harm for us to reset our priorities every now and then. It worked for Bonnie Tyler.

And one day, hopefully, we’ll climb those stairs, glance at the fibreglass rabbits that look like discarded plastic bags and turn our gaze, like Virginia Woolf’s Mrs Ramsay did to the lighthouse, towards the savoury joy of the YSP café specials board and remember just how good things can be.