r Lister’s students speak very highly of her skills as a teacher. Esther Brightman, a creative and professional writing graduate of Dr Lister’s, said: “Kate’s methods for imparting knowledge through thought-provoking questions, tasks and projects leave you wanting to know more and do more. 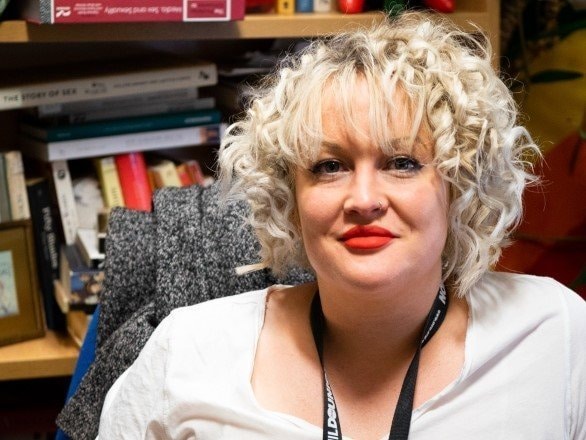 Dr Kate Lister, course leader for creative and professional writing at Leeds Trinity University, inews columnist and published author, has been shortlisted for the ‘most innovative teacher of the year’ award at the Times Higher Education Awards 2020.

She was nominated in recognition of a project in which her students worked with Basis Yorkshire, a charity that supports sex workers in Leeds, to challenge language used in media reports of violence against such women. To mark the annual 17 December international day to end violence against sex workers, students conducted research into media coverage of the 17 women murdered in Leeds and Bradford from 1978 to 2010, revealing how the language used creates stigma and bias against sex workers and influences social attitudes. The life of one victim was explored in detail and the students then produced artwork and a piece of writing in remembrance.

“[I was] completely shocked! The university and the students put me forward for it back before the world went mad. I remember at the time being so touched they would put me forward. It never crossed my mind I would be shortlisted. I’m so shocked – but in a really great way.”

She explained that the students quickly made the choice that they didn’t want to mention the killer or how a victim died, but rather to focus on who they were as a person. As soon as they started to look for that, they found next to nothing. What they found was information about the murder, mentions of drugs, and descriptions of the killer. The women were “prostitutes” and little more. The students then spent months digging around in archives to find fragments of information on these women – hair colour, favourite music, childhood holidays, quotes from friends and family, anything. They then rewrote the media reports with this focus.

“Murdered prostitute” became “Loving mum, much missed by her family.”

Dr Lister has studied the history of sex work for years. The more she studied it, the more she came to realise that the same issues around sex workers’ rights and social stigma have arisen throughout history because, as she explained, it is predominantly women selling sex in a deeply patriarchal world: “Women held few cards but one that could be played was sex – and many played this very well. The downside was the stigma.” The link between such stigma and violence and discrimination against sex workers made her feel she couldn’t just study it; she passionately felt she wanted to be part of calling it out and working to dismantle it.

Another project she worked on with Basis was compiling the history of sex work in Leeds into a timeline, from 1807 to the present day, highlighting the patterns of stigma and policing over time. She also created a series of articles with this organisation for the Wellcome Trust, “Reframing Sex Work”, to provide a platform for sex workers to speak out for themselves. In February 2020, Dr Lister published her first book, “A Curious History of Sex”, and donated the pre-sale profits to Basis to support female sex workers and young people experiencing sexual exploitation in Leeds. The current project undertaken by her students is a further contribution to the field, of which Dr Lister says her students should be proud.

Dr Lister’s students speak very highly of her skills as a teacher. Esther Brightman, a creative and professional writing graduate of Dr Lister’s, said: “Kate’s methods for imparting knowledge through thought-provoking questions, tasks and projects leave you wanting to know more and do more. With the ability to put a group at ease and open up dialogue about subjects which may be sensitive or triggering, but need to be openly discussed, she leaves you feeling empowered. The module with Kate opened my eyes and mind. I had the opportunity to produce work that will go on and effect change for the better in people’s actions and opinions”.

The 16th ceremony of the Times Higher Education Awards is on Thursday 26 November, 2020, and will be the first-ever virtual awards ceremony.