First, a local artist, Rachel Till was forced to tweet that some Pontefract street art was definitely hers. 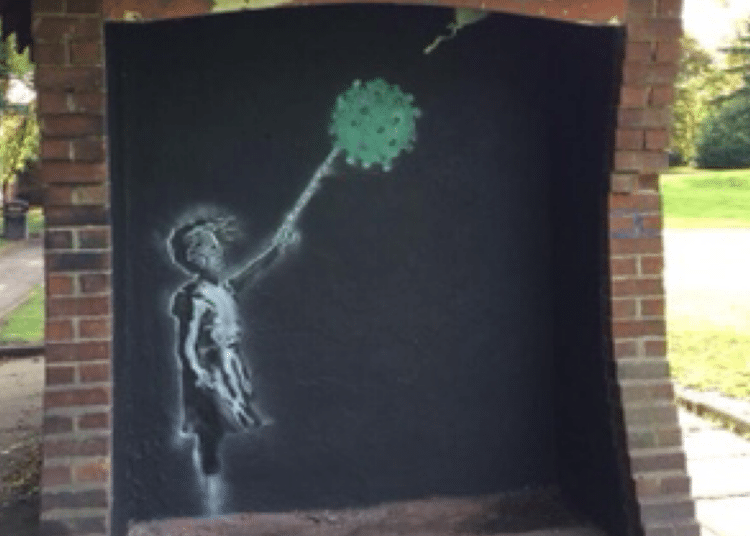 Is it? Or isn’t it? Photo: Jimmy Andrex

Is Banksy working in the Wakefield area? A series of clues and new street art has fuelled speculation that the legendary graffiti artist may be at work in our area.

First, a local artist, Rachel Till was forced to tweet that some Pontefract street art depicting themes around the NHS and Coronavirus was definitely hers and not the world-famous Bristol icon. She even coined her own #itsnotbanksy hashtag to drive home her point when a rumour went round on Twitter that Banksy had actually been in Pontefract within the last couple of weeks.

Then, early this week, new artwork appeared in a Wakefield park. At first people admiring the work assumed it was a well-crafted copy. The work has echoes of one of Banksy’s best-known pieces, Girl With A Balloon. However, in this example the balloon has drifted away and been replaced by a coronavirus on a chain. The plot thickened when it emerged that there has never been such a Banksy before. So, either a local artist had put their own spin on familiar Banksy tropes or …

Authenticating the piece is further complicated by Banksy’s methods. Officially, despite several attempts by tabloids, only a few people know who he is. Whenever a work is confirmed to be his, there is always a media frenzy, often accompanied by attempts to “own” the work, given that an original Banksy can sell for millions. For this reason, the artist himself often refuses to confirm or deny whether a work is genuine. His belief is that street art is for the people to enjoy, not to be parcelled up and hidden away by wealthy collectors.

Looking at the Wakefield work, it’s clearly an inventive and beautifully executed piece. However, the smudgy areas on the edges are not typical of Banksy’s stencil art technique, though it is a feature of Blek Le Rat, the Paris graffiti artist from whom Banksy took many of his stencil art techniques and modus operandi.

So far, it’s been left alone, unnoticed by many of the people walking in the park on the afternoon this writer viewed it. Tagging, far from being seen as vandalism, is seen by many street artists as fair game, so long as it’s done skillfully.

For now, what we have is a lovely, free artwork anyone can enjoy. As for its location, it would go right against Banksy’s anti-consumerism stance to tell readers where it is. Go out and look for it. Get away from the screen. Get into the open air and walk around with your eyes open. Beauty can’t always be bought.

You never know, you might come across something original that makes you smile. Most ‘great’ art is only recognised once the artist is long dead and we’ve all been told it’s great. This writer’s favourite bit of street art has lain, undisturbed for many years in another Wakefield park. It’s original, witty and clearly the result of thought, artistry and planning.

Get your coat on.