Aidan Enright, in his first article for Yorkshire Bylines, explains the relationship between Starmer, Labour and Ireland. He asks what consequence a border poll would have for Labour and Conservatives, and whether Starmer can reassure unionists he understands their concerns. 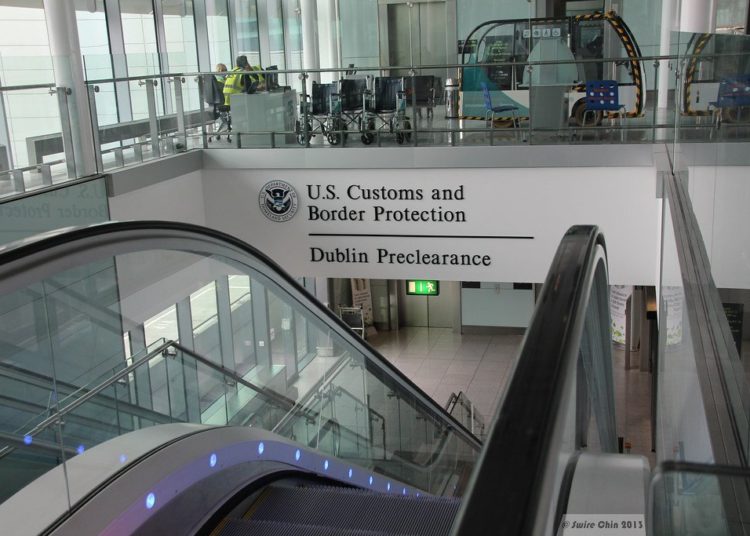 “Clearing U.S. Immigration at Dublin Airport” by Can Pac Swire is licensed under CC BY-NC 2.0

Boris Johnson is very unpopular in Ireland, but British-Irish relations and the debate an Irish border poll are not going to be easy for Keir Starmer either.

Since becoming prime minister in 2019, Boris Johnson has made a decidedly bad impression with his neighbours across the Irish Sea. In Northern Ireland, he misled the one party that supported him: the Democratic Unionist Party (DUP). But his Brexit deal, resulting in a border down the Irish Sea, has infuriated all parties: unionist, nationalist, and cross-community.

Keir Starmer, on the other hand, knows Northern Ireland better than any new leader of the Labour Party. As a QC, he advised the policing board on the Police Service of Northern Ireland’s compliance with human rights laws. As shadow Brexit secretary for three years, he became even more familiar with the region.

Since becoming leader, he and his Shadow Northern Ireland secretary, Louise Haigh, have met with political leaders in the North and emphasised the need to defend the principles of the Good Friday Agreement.

The Labour party’s connections to Ireland

So, on the face of it, Starmer and the Labour Party have the edge on Johnson and the Conservatives regarding British-Irish relations. But things are never that straight-forward, and the debate on an Irish border poll will be as difficult for Starmer as it will be for Johnson. It could arguably be more difficult.

First, although the Labour Party is a unionist party, Starmer’s predecessor, Jeremy Corbyn, made no secret of his support for Sinn Féin and a United Ireland through the years.

Second, Labour’s ‘sister party’ in Northern Ireland, the SDLP, ultimately wants a United Ireland. Indeed, they have formed a partnership with Fianna Fáil, a moderate nationalist party and senior partner in the Republic of Ireland’s coalition government, which has set up a ‘Shared Island’ unit to consider the path toward a United Ireland.

Difficulties of a United Ireland for Labour

While the aim of a United Ireland is of course a legitimate one, the Labour Party’s connection to it, albeit indirectly, could prove tricky for Starmer in terms of building trust with unionists in Northern Ireland, who are now concerned about the prospect of a border poll.

How does Starmer reassure unionists that he understands their concerns? Should he be building closer links with the cross-community Alliance Party, moderate unionists, and civil society and business groups that represent both communities, while making clear that his party’s link to the SDLP is based purely on the common cause of social and economic justice?

What he can’t do is rely on Johnson’s current unpopularity among unionists in Northern Ireland. Johnson may have pulled the wool over the DUP’s eyes on the Irish protocol, but a rapprochement on the issue of a border poll is almost inevitable.

Moreover, come election time, Johnson will have no scruples in pointing to Labour’s apparent weakness on the Union under Corbyn and, by implication, Starmer. Indeed, this has already been flung in Starmer’s face. What’s more, he will not hesitate to rule out the granting of border poll under his watch, whether he means it or not.

What approach will Starmer take?

So, what does Starmer do? Does he rule out granting a border poll if he becomes prime minister, or does he say that he cannot rule out conceding one, as to do so would fly in the face of the spirit of Good Friday Agreement?

He has, after all, rightly placed great store in defending the agreement as a proud Labour achievement. One suspects that Johnson and his government will not be so conscientious. Michael Gove’s infamous pamphlet condemning the agreement springs to mind.

One thing’s for sure, Starmer’s proposed UK-wide constitutional convention will not cut the mustard in Northern Ireland, either for unionists seeking to guarantee the region’s position within the Union, or for nationalists seeking clarity on the prospect of a border poll if it there is clear majority for one.

Then there’s the politics of the Republic of Ireland. Starmer will no doubt seek to build good relations with the Taoiseach, Micheál Martin, and his government. Indeed, one would imagine that Starmer’s moderate style of politics is likely to endear him to Martin in a way that Johnson’s populism does not and will not.

But how will Starmer manage relations with Sinn Féin, who could be in government after the next general election with a mandate for delivering a border poll?

Johnson will no doubt take the toughest possible line against the idea of a border poll and keep Sinn Féin at the longest of arms-length. But can Starmer afford to be so belligerent if he seeks to govern after 2024 and manage British-Irish relations in a non-confrontational way?

Consequences of a border poll for Labour and Conservatives

Of course, there are no direct electoral consequences for Labour or the Conservatives in Northern Ireland, but the Conservatives will be ruthless in portraying Labour as weak on the issue of an Irish border poll at the next election if they are given the opportunity, and many unionists in Britain will be receptive to that argument.

Starmer is right to say that Northern Ireland is just an ‘afterthought’ for Johnson and the Conservatives, but has he really thought through Labour’s stance on the constitutional future of Northern Ireland and the complications of maintaining and building political alliances on the island of Ireland?

If he hasn’t, then he’d better get cracking, because the debate on a border poll in Ireland will not go away.