In an inter-connected world with a captive, susceptible and vulnerable audience – and in this climate of uncertainty – disinformation and fake news thrives. 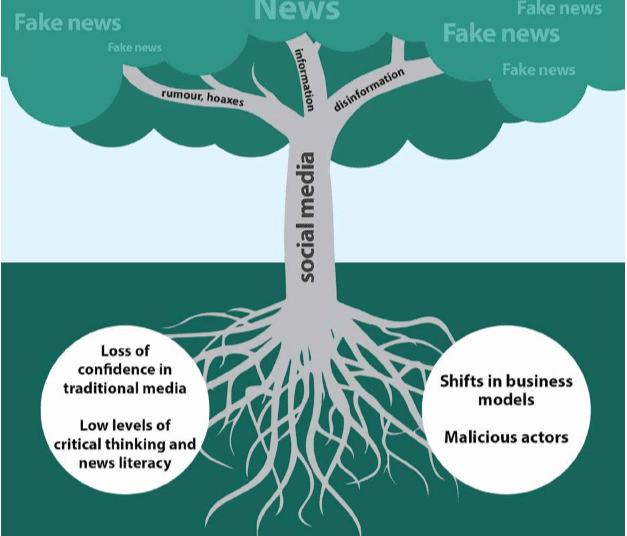 In an inter-connected world with a captive, susceptible and vulnerable audience – and in this climate of uncertainty – disinformation and fake news thrives. Our natural tendency to share helpful information is exploited by a proliferation of disinformation pollution, seeping into our information bloodstream.

Disinformation is defined as “information designed to deliberately mislead and deceive with malign intent”. It is the deliberate use of false or misleading information for political or financial gain. Nation states, proxy cyber-warfare syndicates, online trolls and programmed bots are all hostile actors that create and disseminate fake news often for a predetermined agenda designed to distort, dismay, distract and dismiss the truth.

In this pandemic crisis, we are seeing an influx of messages, voice notes and misattributed multimedia containing apparent Covid-19 tips and solutions. Much of this is disinformation – either in the form of targeted information operations or random content designed for a spectrum of effects, from creating seemingly mild hoaxes to disrupting the fabric of our society.

Distancing language is a common feature for when liars attempts to distance themselves from the lie in question. This often involves a ‘friend’ having told them something. For example, one viral text message, that claimed the British Army were covertly locking down London (starting with Clapham), included a preamble before the main lie claiming: “My friend said about the army thing who has a friend in parliament and that ishis (sic) source …”.

The message then continued with the claim that the army was steadily locking down London. It stated that supermarkets would be open for a few hours a day, with permission needed to go outside. “He said they’re gonna be seriously strict about everything”. It’s apparent that the distancing language is used to give credibility to the subsequent lies.

Remember, if the information contains distancing language, it is most likely false. It is highly unlikely that your ‘friend of a friend’ has a source inside government!

Consider the origin of the information before you share. If you have received something like a random screenshot of text that supposedly contains useful Covid-19 updates, check the source. If the source is not immediately apparent, attempt to find its origin. In the absence of a source, the information is most probably fake.

Any reliable information will be typically branded and/or labelled by the author. If a source is named, consider how reliable the source may be.

For example: this WhatsApp voice recording, claiming to originate from an NHS worker, explains that, “One third of the 900 deaths will be babies, children and teenagers with no underlying health issues. The NHS are overwhelmed and unable to respond to home emergencies. People will be told to manage their symptoms at home and no ambulances will be sent to patients, even those who are struggling to breath.” West Midlands Ambulance Service branded the recording as ‘fake news’ and have encouraged people to stop sharing it.

It is highly improbable that your grandmother or a neighbour down the road has stumbled across an NHS insider with a voice note on WhatsApp containing vital, life-saving information!

Our culture of instant gratification contributes to impulsive sharing. Popular fake stories will include emotionally resonating buzzwords and exaggerated language, designed to invoke a reaction. The more emotionally arousing and divisive the material, the higher the share rate. So called ‘clickbait’ (designed to make you click a hyperlink to another page or article) is a popular format for disinformers, who use sensationalist headlines and punchy, emotional imagery to entice the reader.

Prime Minister Boris Johnson was recently the subject of a fake news campaign by publisher Dorset Eye. One of their articles led to the hashtag #OfficialSecretsAct trending on Twitter. The story claimed that NHS workers were forced to sign the Official Secrets Act and were told to fabricate stories that the prime minister was ill with Covid-19. Their ‘source’ allegedly said:

Which Dorset Eye suggested was, “Proof that we, the public, are being hoodwinked!”

Dorset Eye have since edited the article and apologised, saying that it may have been satire; but it had already been shared, with many believing it to be true. Look at the attention-grabbing words they used for this clickbait: “official secrets act”, “hoodwinked”, “Was Boris Johnson’s Covid-19 condition contrived?”. It’s easy to see how it went viral. Always read beyond the headline. Be aware of such language and read the entire article with an air of scepticism.

Fake news can often use genuine images or video, but be presented out of context to the original in order to mislead.

The photos used in the ‘locking down London’ fake news story (mentioned above) used photos that were taken prior to the army offering military assistance to the NHS. The claim was debunked as false but not before it was shared by thousands of users believing it to be true.

In another viral post, a video showing body bags lying on the floor of various rooms inside a hospital was supposedly filmed in St Mary’s Hospital, London. This was incorrect. It was filmed in Ecuador and repurposed to add substance to the claims that the Government are hiding the true death count.

A simple reverse search will reveal if the image appears anywhere else online and will reveal any misattribution. Look up ‘How to do a reverse image search’ online.

In short, always look for primary sources and find out if a story has been widely reported by the mainstream media. Analyse the language. Never share clickbait stories without reading the entire piece. Question the accompanying imagery and video, and do a reverse image search to determine authenticity if necessary. And remember, this list is not exhaustive. In our culture of social conformity and instant gratification, irrespective of how we receive the information, we must slow down and think before we share.

PPE: the truth about your personal protection