The government has launched a consultation on proposals designed to ease the disruption expected in Kent around Dover and Folkestone after the Brexit transition period comes to an end. 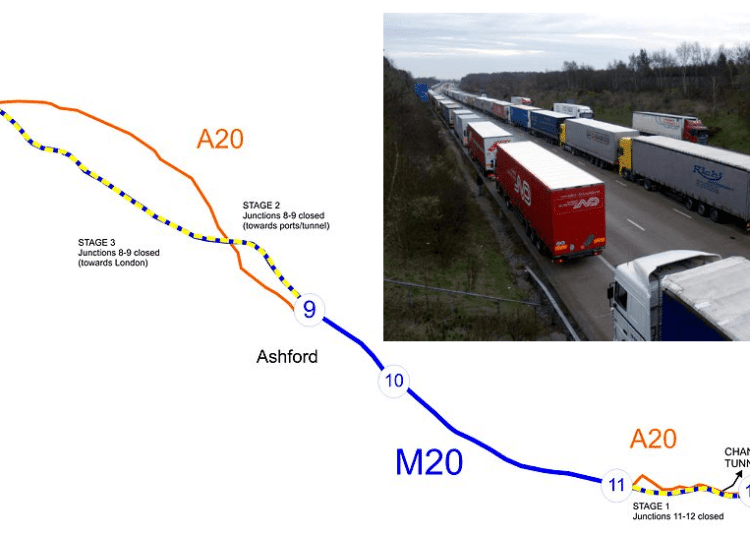 The government has launched a consultation on proposals designed to ease the disruption expected in Kent around Dover and Folkestone after the Brexit transition period comes to an end. Measures that were in force in case of a no deal exit last year will be enhanced and extended until October 2021.

A foreword by Transport Minister Grant Shapps, says there is “a risk of some additional friction at the border.”

The document itself anticipates “significant levels of disruption to outbound traffic” but claims it is unlikely to last beyond the summer of 2021.

The measures include the reintroduction of Operation Brock in which lanes of the M20 are reserved for queuing HGVs heading to the cross-Channel ports, while a contraflow system operates on the westbound carriageway. This would be introduced in three stages back to Junction 8 as queuing traffic increases.

In addition, the government say work “has commenced” on a site at Ashford to provide 2,000 HGV holding spaces which will be integrated into a new updated traffic management plans for the end of the transition period. This is apparently “still in development” but is likely also to incorporate most parts of the 2019 approach.

Drivers will be expected to be border-ready by the end of December, which means carrying appropriate information including but not limited to:

New technology via a yet-to-be-developed web-based portal called the smart freight system (SF) will enable drivers, or someone acting on their behalf, to self-declare if they have all the documentation they need. Enforcement officials will be able confirm that a vehicle is registered on the SF portal, and to see the outcome of their self-declaration.

The consultation says 80 percent of drivers operating on the short straits (between Calais/Dunkirk/Coquelles and Dover/Folkestone) are not from the UK and “may not have high levels of English language proficiency”. In response to this, the SF portal will have to be available in multiple languages.

The government is also proposing that hauliers using designated roads in Kent leading to Dover and Eurotunnel must have a ‘Kent access permit’ (KAP), digitally issued to drivers receiving a ‘green’ or ‘amber’ result from the SF service. Each permit would be valid for 24 hours to cover a single trip, and police and DVSA enforcement officers could issue £300 fixed penalties to hauliers found heading for Dover or Eurotunnel without one. Fines would normally be on the spot, though UK drivers would have up to 28 days to pay. If a driver refuses to pay, their vehicle could be impounded.

Even local East Kent HGV drivers who are travelling to the short-strait ports, will be covered by the SF system and will need to register before commencing their journeys. Vehicles deemed unready could be stopped, fined and held back until they were ready, or even instructed to leave Kent. Highly perishable goods would be proritised, with two key sectors identified: single loads of fresh seafood products and day-old chicks.