James Powell explains 'Neom': the 'planned new future' residential area. The area will operate outside of Saudi laws, an attempt to make it more attractive. But what will this mean for Middle Eastern relations, in particular those with Israel? 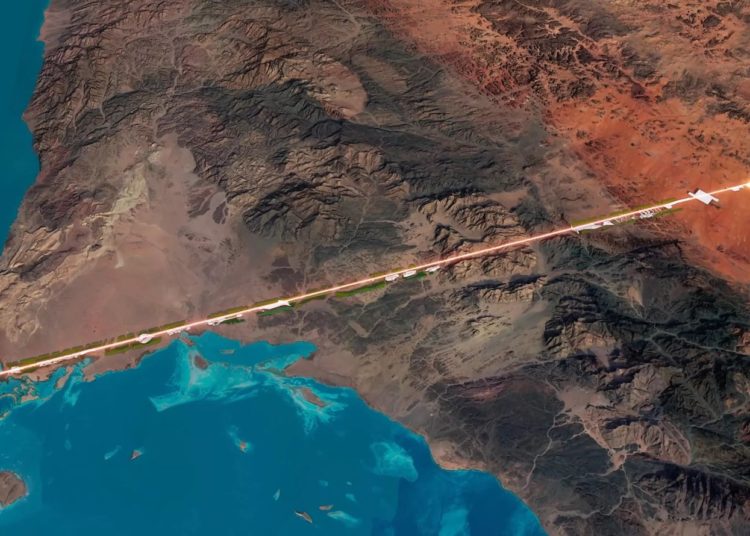 Over the past few months, you may have seen an advertisement on your TV encouraging you to search “what is the line?”, pictured above. The line refers to the 170km linear city being planned in Saudi Arabia. This ‘utopia’, Neom, standing for ‘new future’, could transform the oil-rich, conservative Kingdom into one of the most desirable residential, business and tourist destinations in the world. But in trying to reach this goal, it may throw the Middle East into further conflict, putting lives at risk and destabilising the region.

Neom is an attempt to move the Saudi economy into the post-oil era. It links the coast of the Red Sea with the mountains and upper valleys of north-west Saudi Arabia. With transport links driven by artificial intelligence (AI), and services that will run underneath the city in a spine and service layer, there will be no need for roads or cars. According to Business Insider, the blue print includes “plans for artificial rain, a fake moon, robotic maids, and holographic teachers”.

In order to be commercially attractive, Neom will operate outside of Saudi laws and traditional Saudi culture, a state within a state. Sustaining the Kingdom’s wealth is the priority and western liberal social policies are set to flood in with the new city.

The publicity for Neom says that “it will integrate disruptive innovation, looking to dislodge existing markets and value chains with the ones built as a part of the running of the city” in the hope of creating new models for how cities run. Machines powered by AI will take responsibility for jobs deemed repetitive and will provide public transport.

At an estimated cost of around $500bn, the Line is being built as a ‘honeypot’ of economic activity and investment in a number of areas, including energy and water. Neom will spread over the borders of Saudi Arabia, Jordan and Egypt and span over 10,000 square miles, including a bridge which would link Saudi Arabia and Egypt. To achieve his ambition, Saudi’s crown prince and effective ruler Mohammed bin Salman requires the cooperation of his neighbours.

Israel maintains that the bridge linking the nations will block its entry to the Red Sea, violating the 1979 Israel-Egypt-Peace-Treaty.

There is no simple solution here, as Saudi Arabia does not currently recognise the state of Israel and public opinion is strongly against doing so until the Palestinian problem is resolved. Other gulf states have moved to recognise Israel and normalise relations in order to tackle the perceived threat from Iran. Bin Salman is likely to have to reach some sort of agreement with Israel, including state recognition, conducive to completing the Neom project.

Communications between Israel and Saudi Arabia were opened at a meeting in Warsaw in 2019 and, recently, Netanyahu’s plane was spotted at Neom airport encouraging further speculation about meetings and improving relations between Prime Minister Benjamin Netanyahu and Saudi Crown prince Mohammad bin Salman.

This meeting was, of course, denied, but it suggests that bin Salman is willing to change its position and, perhaps, the course of the middle east conflict in order to build his utopia. There is no doubt that any deviation from official foreign policy will cause tension internally and amongst 14 other Arab League members who do not recognise Israel.

One can only speculate that in last year’s covert meeting between the Israeli PM and the Saudi Crown Prince in Neom (which currently exists as not much more than an airport and an exhibition centre), Palestine’s autonomy will have been discussed alongside shared concerns about Iran.

The Neom project looks to providing a new inroad for Middle Eastern negotiations and could change Israel’s relations with the Arab world. Israel’s wider recognition is currently gathering momentum, as the Gulf Cooperation Council (with the exception of Kuwait) are moving to normalise Israel, meaning that relations will be ‘non-hostile’. Neom is bringing Saudi Arabia into this process as they negotiate with Israel.

However, there are significant risks for Saudi Arabia as it acts as focal point for the Muslim nations and, if it moves too quickly to recognise Israel without Israel first committing to a permanent Palestinian state with its capital in East Jerusalem (in line with the Arab Peace Initiative, 2002), then this could cause tension between the Emiratis. Such a move would also be unpopular within the country.

The risk/reward balance of Neom is of an enormous scale and it will rest on who compromises. But Israel doesn’t stand to benefit all that much from Neom, so these negotiations are likely to be ongoing for the foreseeable future.