Refugees at the mercy of Covid-19

Stella Perrott considers the plight of refugees in the coronavirus outbreak and the need for an internationally agreed approach to the disease. 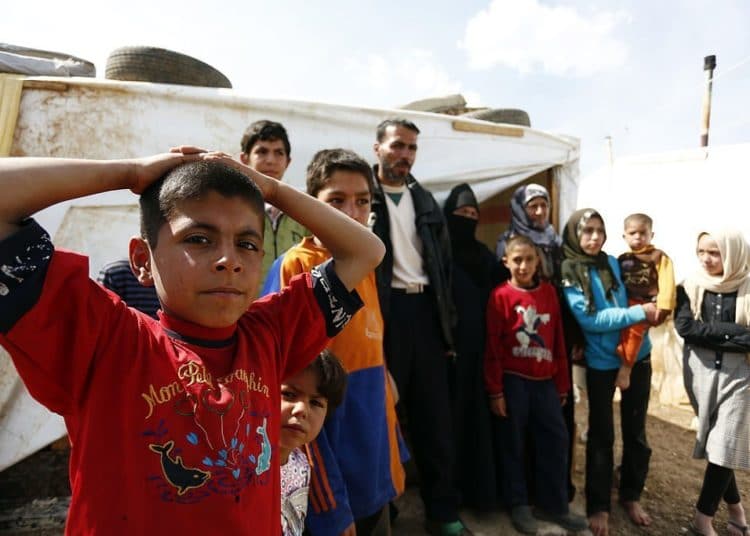 Refugees in a time of coronavirus Österreichische Außenministerium / CC BY (https://creativecommons.org/licenses/by/2.0)

During a crisis our concentric circles of attention and empathy shrink, first to family and friends, and then to our local communities as we struggle to make sense of what is happening and overcome our fears for ourselves and loved ones. Meanwhile, war continues; refugees and displaced people in overcrowded camps face the pandemic largely without protection or medical care; and flimsy boats are still crossing the channel from France.

Viruses thrive best when a country’s physical wellbeing has been depleted by war and hunger. Disease spreads most quickly in crowded conditions. War-torn countries such as Syria, or countries struggling with the aftermath of war such as Afghanistan where the population is already malnourished and where health systems are both rudimentary and patchy, are likely to suffer most. Worldwide there are 68.5 million displaced people and a further 25.4 million refugees, half of whom are children.

Just last week, the first Covid-19 case was diagnosed in a Lebanon refugee camp marking the likelihood of widespread and devastating contagion. Of all countries worldwide, Lebanon hosts the most refugees as a proportion of the local population: a 4:1 ratio of refugees to local people. In comparison, the UK (the seventh wealthiest country of the world), hosts refugees at a ratio of 1:2,324. In other words, Lebanon takes 600 times the number of refugees per head of population than the UK.

Other article by the same author

There are about 475,000 Palestinian refugees in Lebanon in 12 official and 26 unofficial camps, along with up to 1 million Syrian refugees. Lebanon is facing its own severe economic pressures with high rates of unemployment (especially youth unemployment), poverty and hunger. Its response to coronavirus was to shut the country down early and so far it has managed to contain it with only a few hundred cases and a handful of deaths, though the lockdown has increased hunger and civil unrest. An outbreak in a refugee camp would not only be a humanitarian disaster within the camp but also for the wider Lebanese society.

If one person in a camp gets coronavirus it is almost certain the whole camp will be quickly infected. Tents are shared, people live closely together, water points are few and good basic hygiene principles are impossible to adhere to. Refugees have to queue for everything – for food, for the toilets, to shower or to wash clothes. Daily life is often one long crowded queue in which social distancing is impossible.

Internationally, responses to the virus are polarising. Some countries have pulled down the national shutters and are seeking to be totally self-reliant, while others think that international co-operation and collaboration is the only way forward in defeating the disease. It is mostly the richest nations including the UK, the US and the EU, which have taken measures to restrict exports of personal protective equipment (PPE) to other countries. The UK Government also initially indicated that the distribution of any vaccine developed in the UK must prioritise British people (they have since joined an international effort that will ensure access will be based on need).

Thanks to the Upper Wharfedale Refugee Support Group for producing this useful fact sheet. Download a pdf copy HERE. For more information about this group, please contact refugees@upperwharfedale.net

So far, the US is alone in taking its extreme nationalistic approach. It has insisted that other countries will not have access to a US-funded vaccine and prohibited the export of PPE or ventilators made in the US. It has even gone so far as to steal protective equipment already on its way to other countries, including Germany and Canada (the US government has subsequently rowed back on some of these measures). A government’s first duty is to protect its own citizens. But, any country or trading block that uses its purchasing power to inflate the price of equipment to a level beyond what the world’s poorest countries can afford (or the World Health Organisation on their behalf), is sentencing other human beings to misery and death.

In addition to restricting the availability of essential supplies, the US has also stopped funding some of the international organisations that are assisting refugees. In 2018, it stopped aid for Palestinian refugees, a move that has affected Lebanon’s ability to respond to the large influx of refugees to their country. More recently the US stopped funding the World Health Organisation (WHO), which as well as reducing its capacity to lead the global response to coronavirus, has reduced its capacity to co-ordinate international efforts to prevent contagion in refugee camps and surrounding communities. The poorest countries of the world, that have taken on the greatest burden of accommodating and caring for refugees, are doing so on steadily reducing funds.

Considerable press attention is paid to the comparatively few refugees that make their way to Europe and onwards to the UK. The UK supports just 0.17 per cent of the world’s refugees and displaced people, accepting only about 10,000 refugees per year. Meanwhile, most refugees have nowhere to go and no means of getting there. Some 95 per cent of those forced from their homes either remain in their own country or flee across the nearest border to another. These overcrowded and impoverished camps are where coronavirus will thrive.

Unless the world acts collectively, and soon, we are about to see another humanitarian catastrophe unfold.

How you can help

There are a number of international organisations supporting refugees:

International Committee of the Red Cross and Red Crescent