WASPI women in Yorkshire have been let down by the government over state pensions: they tell us what they are campaigning for. "The plight of many WASPI women is desperate, with many struggling to work, pay the bills, put food on the table and keep a roof over their heads. Shame on the courts and governments for not seeing the discrimination we have suffered, but shame on us if we give up the fight." 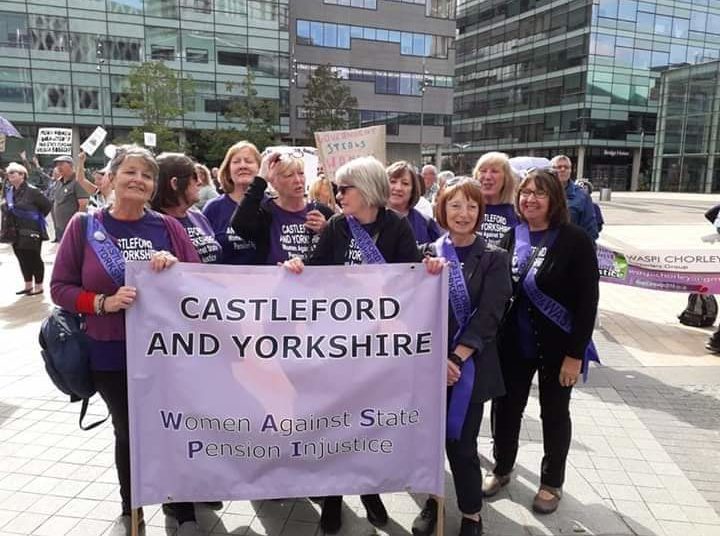 Castleford and Yorkshire Women Against State Pension Injustice is part of the WASPI campaign. The group was set up in early 2016 and now has 274 members. The national WASPI campaign has 71 groups around the UK. This campaign is not against the equalisation of the state pension age, but the way in which that the rise has been implemented.

For many women born in the 1950s, state pension disadvantage was a factor from the outset. Life for a lot of women was about raising small children and running the home. Girls who went to secondary school schools were taught domestic science, ironing shirts and cooking a good meal in preparation for becoming a wife and mother. Men were the breadwinners and, after marrying and having children, some women never returned to the workplace or, if they did, were behind in the race in terms of building up the number of years necessary to qualify for the maximum pension (35 years) or indeed any pension at all (10 years).

In addition, many women returning to work had a restricted number of available hours. In the absence of free childcare places, women were obliged to fit their working hours around the family’s main earner and around the availability of family members to look after the children. Consequently, whether from necessity or whether because this is what women were encouraged to do, many took part-time jobs, often at a level of pay too low to earn any pension credit. Taking on more than one job has been no solution, as the qualifying level is specified in terms of earnings from one employer.

A further equality issue is that until 1979, married women could opt to pay a reduced amount of national insurance, known as the ‘married woman’s stamp’, a system which has continued for those already opted in. This meant they would not themselves qualify for a state pension but could claim a reduced pension on the basis of their husband’s contributions. For those earning part-time wages, whether or not to pay a full stamp so you could have your own pension when it came to retirement at 60 was a big decision.

On top of this came the 1995 Pensions Act. Women born in the 1950s who would most be affected by the changes did not receive letters explaining the changes the 1995 Pensions Act would make to their age of retirement. Instead, it was advertised on TV (two dogs talking to each other), and in the Financial Times, which is not a paper that is regularly read by working class families. Indeed, for several years, even solicitors weren’t aware of the changes within the 1995 Pensions Act. This meant that financial agreements within divorce settlements were still based on the woman reaching state pension age at 60.

We know now – through freedom of information – that financial advisers were informed by letter of these changes. This meant they were able to advise higher-paid women to invest more of their savings privately, which then gave them the option of retiring earlier than 65.

In 2011, the coalition government at the time increased the state pension age once more, to bring women into line with men and moving both from 65 to 66. This was a blow to women born between 1953 and 1954, as they would now not be on the staggered timetable applied to those born earlier but, like women born after November 1954, would have to wait until they were 66.

This time, letters were sent out. Many women were shocked to discover that they would not reach state pension age until 66 – six years later than they had expected and planned for. Gillian, for example, received her letter in July 2013, with three years to go to her 60th birthday. Could she save £40,000 pounds in those three years to retire as planned at 60? This is on average what 1950s women have lost.

Sadly, some women had already retired early, thinking they only had a year or two to go until their 60th birthday. Their savings are now gone, and some have downsized the family home or moved in with family in order to make ends meet. Some are now queuing at food banks. These women have worked most of their lives and have been reduced to begging in their own country, for what should be rightfully theirs. A pension is not a benefit: you pay in, your employer pays in; the government does not.

Achieving pension age equality is something we know and accept had to be done. However, we had an uneven starting line and experienced greater workplace and financial hurdles during our lives and yet we are now expected to finish in the same place as men. This shouldn’t be how ‘equality’ works. After a lifetime of inequality and discrimination, to be made ‘equal’ at the eleventh hour – when we were within sight of retiring and spending time with our loved ones, looking after grandchildren and parents – is unfair yet again.

From the start, the WASPI campaign has asked for transitional arrangements to be made to all 1950s women. We are still waiting and watching, as many women become destitute and thousands have died before this transition could occur. The plight of many WASPI women is desperate, with many struggling to work, pay the bills, put food on the table and keep a roof over their heads. Shame on the courts and governments for not seeing the discrimination we have suffered, but shame on us if we give up the fight. Now is the time to push forward, until we have achieved the justice we deserve.

Find us on Facebook or email Castleford and Yorkshire WASPI group at Cay50waspi@gmail.com.