Nineteenth century Britain had a fascination with the exploration and discovery of the natural world, zoos appeared throughout the country 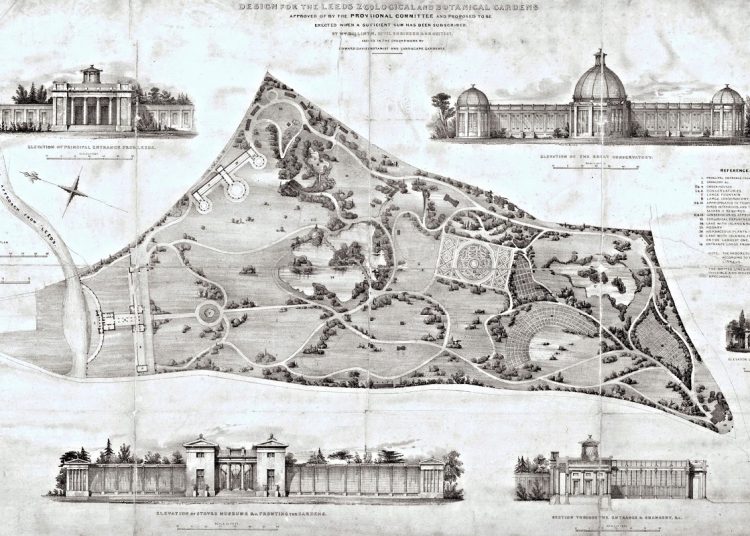 Design for the Leeds zoological and botanical gardens

Although wild animals have been kept in captivity for millennia, often as symbols of power or religious significance, what we now know as the modern zoo developed in the early part of the 19th century. London, Paris and Dublin all opened zoological gardens within several years of each other. Nineteenth century Britain had a fascination with the exploration and discovery of the natural world and zoos, aquariums and natural history and geological museums appeared throughout the country.

The zoological craze in Halifax

Yorkshire was not immune to the craze and zoological gardens sprang up in the most unlikely of places. Many of these endeavours were short lived, however. One such place was Halifax with the town’s zoo and amusement park opening with great fanfare in May 1909. It was not Halifax’s first encounter with wild and exotic animals though as a notice proves that a touring menagerie visited the Spread Eagle in the town as early as 1757.

From nine in the morning until nine in the evening, the amazed public could gaze on “a large porcupine, alive, brought from the coast of Africa, the greatest curiosity ever seen in these parts” along with a crocodile from the Nile, a jackal, a Barbary ape and more.

A similar event five years later also included a panther, wolf, vulture, golden eagle and “many more sights to tedious to mention”. Sadly, one can only guess at the way the animals were treated. A footnote on the handbill also suggests that the wild animals could be bought and sold at will.

Some 150 years later, a still far from completed Halifax Zoo and Amusement Park opened in time for Whitsuntide 1909 when more than 40,000 people thronged to its opening day. Animals on display included an African elephant, lion and lioness, zebra, camels, wolves, hyenas, leopard and many more ‘exotic’ animals. A collection of ‘pygmy’ animals was extremely popular. A boating lake and miniature railway was also added.

Plans for the park also included a ‘native’ village and an ostrich farm. Over the next few years, the park staged several exciting events, and, in the evenings, bands played for dancing. The park though, was never as successful as was envisaged and just seven years later the zoo closed its doors and a year later the amusements followed.

Seventy years earlier, Leeds Zoological and Botanical Gardens were opened in Headingley in 1840. They were intended to rival other similar gardens throughout the country.  The gardens though were not successful, they closed in 1848, re-opening as Leeds Royal Gardens – but these were also closed by 1858. The project had begun with much optimism though, with the Leeds Mercury reporting in 1837:

“We are happy to state that the public spirit in the town of Leeds has manifested itself in a very striking manner by the subscription to the proposed Zoological and Botanical Gardens in the space of just four days to the sum of almost eight thousand pounds.”

By 1839, the society who ran the gardens was also experiencing financial concerns with the same newspaper reporting that the council had a strong objection given the financial situation to the construction of any additional buildings but that:

“A limited expenditure on birds and the less expensive animals … would be advisable.”

The botanical gardens opened on 9 July 1840 with over 2,000 people of ‘all ranks’ attending. The Leeds Mercury enthused about the gardens, commenting on the profusion of colourful and showy flowers as well as the shrubberies and fruit trees. The zoological aspects of the park though were minimal and confined to:

“A fine pair of swans and other waterfowl, an eagle, racoon and fox some monkeys and tortoises.”

It was not until 1843 that the gardens acquired their first and only large animal, a bear. The building constructed to house it remains. The gardens always struggled financially and they never really expanded as planned, leading to their eventual final closure.

The same year that the Leeds Zoological Gardens opened, Hull opened its own gardens. Situated at the northern end of Spring Bank, the gardens were home to lions, tigers, polar bears, an elephant, kangaroos, eagles, owls, and monkeys. The park also housed scale models of the city of Naples and the Crystal Palace that once stood in Hyde Park, London.

Although the gardens were popular and well patronised with events such as galas, dances, and brass bands, they proved just too expensive to operate and like other such endeavours closed after just two decades.

There is no doubting that the Victorians and Edwardians had a fascination with the flora and fauna of the natural world. In the end though, that was not enough to sustain these gardens financially and that is what in the main, led to their decline.