Women abolitionists: “the cement of the whole anti-slavery building”

The Forgotten Women of Wakefield project aims to honour women who contributed significantly to public life in the city, but whose names have been erased from its history. A new exhibition looks at anti-slavery women. 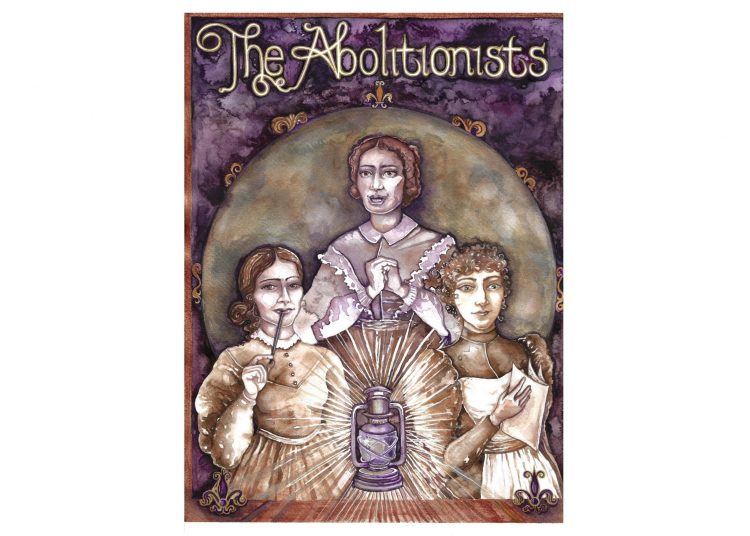 The Forgotten Women of Wakefield project is holding an exhibition of anti-slavery women at the Chantry Chapel, Wakefield from 21 June. Here we look at one of the movement’s leaders, Elizabeth Dawson, and at the wider campaign.

The Forgotten Women of Wakefield project aims to honour women who contributed significantly to public life in the city, but whose names have been erased from its history. Our previous article told the story of Ann Hurst, the newspaper owner and proprietor responsible for bringing the horrors of slavery to the population through her publication, the Wakefield & Halifax Journal.

Over the 30 years following Ann’s death in 1832, and even following the abolition of slavery in Britain and its colonies in 1833, women from Wakefield continued to campaign for justice on behalf of their slave sisters and brothers still bound in chains elsewhere in the world. The rise of the Wakefield ladies’ anti-slavery society is set against the backdrop of significant events that directly affected the attitude and actions of Elizabeth Dawson.

Sexism and misogyny from William Wilberforce

As the movement against slavery gained momentum, women were deliberately and resolutely excluded from the campaign by abolitionist leader William Wilberforce.

In 1825 he made it clear that he disliked what he felt were militant actions by women when they “met, to publish, to go from house to house stirring up petitions – these appear to me proceedings unsuited to the female character as delineated in Scripture”.

Women from Wakefield rejected his view of them entirely. They resisted the prejudice against them and used their skills and influence to stage protests through the use of jewellery, pottery and poetry. These creative responses to their own oppression highlighted their vital role in the anti-slavery movement and galvanised actions from loyal foot soldiers like Elizabeth Dawson who petitioned, leafleted, published and spoke passionately in halls, churches and on street corners.

The ‘Am I not a Woman & a Sister’ campaign, which began in 1830 and deliberately echoed the ‘Am I not a Man & a Brother’ slogan adopted by abolitionists in 1787, was used by women involved in ladies’ anti-slavery societies to influence the decision makers of the time.

Brooches, cameos and teacups declaring support for the anti-slavery movement enabled women to be active, not passive protesters within their own cities and towns. Unlike the suffragist ‘Votes for Women’ movement that began in earnest in 1860 and was led on the whole by women from the upper classes, ladies in the anti-slavery societies tended to be more from backgrounds where their families were not involved in or benefitting from slavery.

By 1840, resistance against the women’s movement was such that the World Anti-Slavery Convention in London decreed that women were, “allowed to watch and listen from the spectators’ gallery but not take part”. This was opposed by many within the movement and fuelled the question of equal suffrage across the land.

Wakefield as a centre of abolitionist activity

Elizabeth Dawson, a nonconformist, was just 20 years old when her sisters’ voices were being oppressed in London. However, she was a frequent visitor to Wakefield, and by the age of 37 lived there. It was a city that was buzzing with abolitionist activity, centred around the Westgate Unitarian Chapel.

At the same time, women were taking to pulpits to galvanise the Temperance movement into action. Helen and Eliza Edmonstone, the mixed race sisters-in-law of Charles Waterton, were living at Walton Hall and walking freely about Wakefield (more on Waterton and the Edmonstone sisters later).

By 1851, when Elizabeth was just 31, Wakefield had elected its first mayor, George William Harrison who, as a staunch anti-slavery supporter and teetotaller, directly enabled the emboldening of increasingly enlightened voices. Westgate Chapel banned pro-slavery speakers whilst Reverend Higginson led a national anti-slavery campaign in the nonconformist press.

The increasing profile of women abolitionists

Simultaneously, women became increasingly visible and proactive in the anti-slavery campaign. Their actions played such a vital role that Sir George Stephen, a fellow abolitionist leader, disagreed with Wilberforce on this issue and claimed that women’s energy was essential in the success of the movement. In a letter to the Quaker campaigner Anne Knight he wrote that the ladies’ associations:

“Did everything … They circulated publications; they procured the money to publish; they talked, coaxed and lectured: they got up public meetings and filled our halls and platforms when the day arrived; they carried round petitions and enforced the duty of signing them… In a word they formed the cement of the whole anti-slavery building – without their aid we never should have kept standing.”

A turning point in the anti-slavery campaign

1853 was a pivotal year, when several events came together to highlight deep divisions and attitudes towards slavery. It began with the invitation of Harriet Beecher Stowe by the Scottish ladies’ anti-slavery society to deliver a lecture tour about her novel, Uncle Tom’s Cabin, across Great Britain. Using the extensive and vibrant women’s network, Harriet visited numerous cities, including Leeds.

Her book highlighted the appalling conditions slaves faced, and it created bitter division amongst the elite. This may have been because she was also an advocate of female suffrage and therefore was a dangerous and powerful voice representing women’s rights at a time when women had few, and their slave sisters had none.

Charles Waterton of Walton Hall, despite his connection by marriage to three mixed-race sisters, writes about Harriet Beecher Stowe in a letter to George Ord dated 8 October 1853:

“So, at last, your canting, cunning calumniating Mrs. Beecher Stowe and her holy husband have left your Grandfather’s meadows to pass the evening of her life in the well cultivated fields of the United States! She has the art of humbug at her finger ends. I was in Leeds the other day when she was to receive money and thanks at a public meeting from the Mayor of the Borough. I was invited to the farce but I would not go. Having just dipped into that lying romance, Uncle Tom’s Cabin, I soon saw that it is a made up book, and I am sure it contains much of the old trash, in a new dress … on slavery.”

Waterton had taken charge of the slave plantations owned by his father, uncle and brother in British Guiana (now Guyana) and managed them between 1805 and 1812. He later claimed that he “never possessed a slave in my life”. He was also vociferous in his opinions that slaves were treated well by their owners – perhaps a reflection of his own management of the Waterton Slave Plantations.

The abolitionist movement continued to be highly visible with adaptations at Wakefield theatre of Uncle Tom’s Cabin. It was, however, about this time that Eliza and Helen Edmonstone, sisters-in-law of Charles Waterton and women of colour, decided to leave Wakefield after an incident.

Whilst there is little print evidence before 1857 of Elizabeth’s direct involvement in the activities of a growing group of women fighting against slavery, it is not unrealistic to assume that she had been heavily involved in the movement for some time. It was only when the women felt ready to set up a formal ladies’ anti-slavery society, that they adopted the constitution of the Sheffield branch. This is where we find Elizabeth, at the heart of it as its secretary.

Their influence was such that they were able to invite important speakers to Wakefield. No longer only reported in the pro-abolitionist press, their speaker programme made it into the mainstream. Elizabeth, as secretary, would have been organising all this and ensuring its success.

Such an interest and momentum had been created that in 1860 Sarah Parker Remond, a woman of colour, international activist for human rights and women’s suffrage, on tour from America, agreed to speak to the people of Wakefield. Frederick Douglass, the former slave and American social reformer, abolitionist, orator, writer, and statesman, who had visited Wakefield once before in 1847 and spoken passionately about the horrors of slavery that he had experienced first-hand, joined her.

There is little doubt who was behind that invitation. The ladies’ anti-slavery society was the only active society at that time. Sarah and Frederick spoke to a packed audience at the Corn Exchange, a testament to the societies’ hard work and dedication.

The rhetoric of the visitors was so powerful, the message so important, that it was decided to establish a new anti-slavery association, one which included the whole of the city, regardless of gender, in order to amplify the work done by the 31 women previously. Elizabeth Dawson was elected as secretary of Wakefield’s first mixed gender anti-slavery association, a testament to her years of work for this vital and significant cause.

Pie of the week: Needles, Isle of Wight