Pen Hemingway examines the practice of 'wife sales'. Disparaged at the time, and degrading for the women, they may also have been an escape. 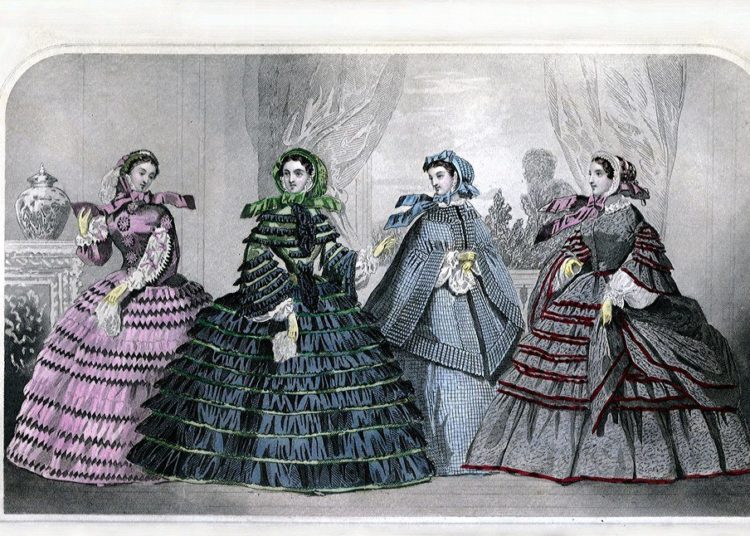 You could buy all kinds of things at a nineteenth century Yorkshire market. Including wives.

Married women were led to market in a halter and sold. Sometimes the halter was round the neck, sometimes the waist. Sometimes, it was a symbolic ribbon instead of a cow’s halter. It was an old folk belief that the public spectacle of a wife-selling voided the marriage, and settled the financial obligations or debts of the wife sold. Although wife sales were not legally valid, the long arm of the law rarely seemed to have intervened.

To understand wife selling, it is necessary to know that formal legal divorce for the poor was impossible until late in the 19th century. It was a poor couple’s way of publicly declaring an end to a marriage. Until 1857 you could only divorce through an act of parliament, and even after that date, divorce was still unavailable to most people because there was only one court in the country that heard divorce cases.

Women and their property if any, remained chattels of their husbands until the Married Women’s Property Acts of 1870 and 1882: the halter, handed over from past husband to next husband, is a blunt visual statement of that chattelhood, echoing seemingly deliberately the sale at market of an animal.

Newspapers almost universally described wife selling as“disgraceful” and retrogressive. Journalists reported on cases with middle class snobbishness, implying it was something only done by the “vulgar”, uneducated working classes. However, an examination of a series of 19th-century wife selling cases in Yorkshire newspapers perhaps tells a more interesting story.

Wife sales may on occasion have represented a break for freedom for a woman, from an abusive, drunken, possibly violent partner. Looking at accounts across the decades of wife selling, a pattern emerges. Often, the husband is in fact making a public gesture, consigning his wife – and sometimes a child that he may suspect isn’t his – to her lover, not to a random stranger. Sometimes, they were offloading a woman’s debts by offloading the woman. (Nineteenth century newspapers were full of items about men renouncing their partner’s debts). In one case, I found an account of a mother coming to the rescue – buying back her daughter from the husband trying to sell her.

“The Annual Register, of the 14th of Feb, 1806, says: A man named John Gasthorpe exposed his wife for sale in the market of Hull, about one o’clock, but owing to the crowd which such an extraordinary occurrence had brought, he was obliged to defer the sale, and take her away about four o’clock. However, he again brought her out, and she was sold for twenty guineas, and delivered, with a halter, to a person named Houseman, who had lodged with them for five years.”

“On Thursday last, a most disgraceful scene was presented at the Cross in Thursday Market, in the city, by a man of the name of Tate, exposing his wife for sale, amidst a great concourse of people, when the sum of twenty-five shillings was offered and accepted for her, and she, consequently, delivered in a halter.”

Over a decade later, another woman suffered the same indignity in the Thursday Market in York, (Yorkshire Gazette, July 7, 1827) but this time the gavel went down on a lower price:

“A most disgraceful scene took place in our marketplace, on Thursday last. A man of the name of Mills, exposed his wife for sale with a new halter round her neck. She was purchased by a person with whom she has lately cohabited, called Gallamore, fortwo shillings. She appeared to be on the wrong side of 50; has lost one leg, and has a wooden substitute.”

In 1838, in Bridlington, (Hull Packet, October 26, 1838) a farmer’s labourer called Mowthorpe sold his wife with a halter round her neck. Days before, he had tried to persuade the local auctioneer to take on the sale, but the auctioneer “declined any part in the affair”. So Mowthorpe played the part of salesman, and sold his wife for two sovereigns.

“The vulgar notion is that a man may, with a halter &c… dispose of his wife, and that the bargain is binding on all parties. In this instance there were two children, one of whom is to remain with the father, and the other to go with its mother.”

In Barton, near Hull (Hull Packet, May 25, 1849), there was a county court case when a man tried to recover 3s and 6d for goods sold and delivered to a woman by suing not her legal husband, but a man who had bought her in the market place:

“Some months ago, a man named Ray, offered his wife for sale in Barton Marketplace, with a halter around her waist, to the great scandal of the town. The defendant, William Harwood, was the fortunate purchaser of the lady for 1s., and carried off his bargain in triumph, at the same time exonerating himself from all previous engagements… in connection with the transaction. The plaintiff, Richard Thornton, in bringing his suit before the court, contended that the female was the defendant’s wife, whereas Harwood maintained that she was only his housekeeper, she having a husband living at the time. To end all controversy, the lady herself was called upon, and stated that she was sold in Barton Marketplace, in the usual way – namely, for 1s., and that she was merely Harwood’s housekeeper, and that Harwood was not responsible at the time of the purchase for any debts that she might previously have contracted. As Harwood did not turn up in court, the judge dismissed the case”.

This gives an insight into how some women – and their buyers – may have spun the sale to a censorious, Victorian world; that the transaction concerned a housekeeper rather than a wife

In 1858 (Notes And Queries) … in a beershop at Little Horton, Bradford, a man named Hartley Thompson put up his wife for sale. She was described as a pretty young woman, and the sale was announced beforehand by means of a crier. The woman was led to the sale by a ribbon round her neck, used as a halter. In 1862, at Selby, a man publicly sold his wife on the steps of the Market Cross for a pint of ale.

“An innkeeper, at Grassington, agreed to dispose of his spouse to a gentleman upon payment of 100 guineas, the latter depositing one guinea as ‘hand money’ on the bargain. When, however, the buyer went the next day to pay the remainder of the amount, and to bring home his purchase, the fair dame proved obstreperous and flatly refused delivery of herself, and the disappointed man went wifeless home again – a sadder if not a wise being, for the innkeeper declined to return the earnest money.”

“In December 1862; the un-named wife of farm labourer, William Holmes, was sold at Selby’s Monday market. About two o’clock in the afternoon of Monday last a novel and disgraceful scene was enacted by a simple fellow named William Holmes, a farm servant, residing in the neighbourhood of Newland, a short distance from Selby. It appears that Holmes’ wife, about two years ago, left him and took up her abode with another man, with whom until very recently she had cohabited. From some unknown cause the unfaithful spouse, a few days since visited her husband, and tried to persuade him to accept her again, but instead of an amicable arrangement being made between them, they quarrelled, and blows were struck.

The wife summoned her husband before the magistrates, at the petty sessions, held in Selby, to answer the charge of assaulting her, and the defendant was fined 5s and costs. Soon afterwards he was heard to publicly express his intention of selling his wife. He bought a horse’s halter, and, taking hold of his wife, placed it round her neck. In this manner, he took her up to the Cross, in the marketplace, and, having mounted the steps, offered her for sale, and ultimately sold her to her old paramour for a pint of ale. A large concourse of people assembled to witness the proceedings, which caused no little amusement.

Just as the sale had finished, the police made their appearance, upon which loud hooting and hissing broke from the crowd. Holmes at this stage thought it advisable to shift his quarters, but before he could do so, he was taken into custody, charged with creating a public disturbance. On his way to the police station, in company with a policeman, however, he managed to escape and ran away, and was with some difficulty recaptured. The wife was left with her purchaser, in the marketplace, and apparently not at all out of humour with the proceedings.”

After the passing of the Married Women’s Property Acts of 1870 and 1882, women ceased to be their husbands’ chattels and the law gradually began to grant them the separate legal personality which would eventually lead to votes for women.

By the later 19th century, newspapers were writing about wife-selling as a curiosity of old. It was dying out. Scholars have noted that by the late 19th century wife selling was a practice largely confined to the industrialised North. As society (and the law) changed, wife selling died out. It was never a practice confined to the North – Thomas Hardy’s famous wife-selling scene at the start of The Mayor of Casterbridge (1886), proves that.

It would seem that wife selling was never very common – it was after all a newspaper worthy event. Nevertheless, despite the formal powerlessness of women, the examples cited here often show that the sale was regularising a de facto relationship between a  woman and someone she wanted to be with more than her legal husband; or it might provide her escape from an unhappy or abusive relationship.

Perhaps wife-sale shows how people invented solutions to unhappy marriages, which were light years ahead of formal law.