Marcus Cain visits the Hyde Park Book Club in Leeds, one of many venues impacted by the pandemic. 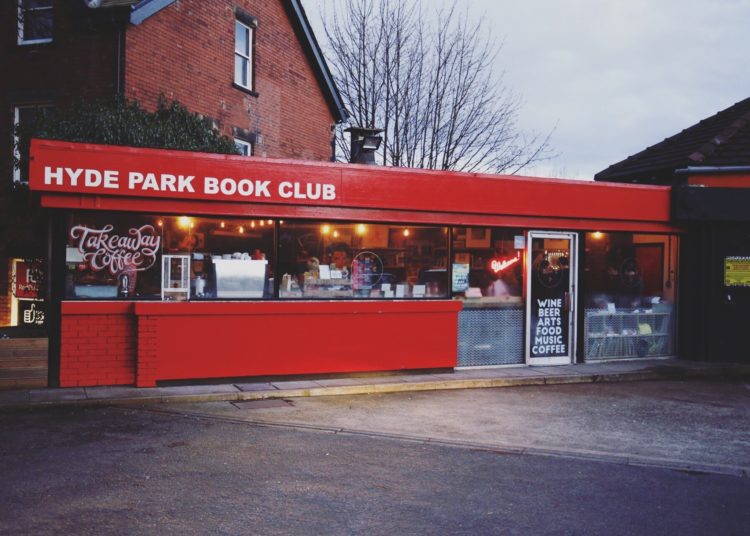 Image by the author

Vital Venues is a series of articles about live music and arts venues in Yorkshire and how they have fared during the ongoing pandemic. These venues are the lifeblood of our incredible cultural scene here in Yorkshire and this series aims to give you an insight into some of the inner workings of these essential hubs of creativity.

To kick things off I spoke to Jack Simpson, owner of Hyde Park Book Club in Leeds, whose positivity and optimism in the face of the monumental challenges currently faced by venues like his, is surprising and incredibly welcome.

Hyde Park Book Club is known for its homemade food, locally sourced beers and the sheer amount of creative talent that comes through the door – from well-known national touring artists to established local bands, to brand new projects on their first proper outing.

I began by asking Jack how the past few months have been from a business perspective and his resilience was immediately evident:

“It’s been challenging but not all bad really – the Book Club, being in a kind of suburb, was actually really busy and lots of the government support has actually been decent for businesses our size, so it’s been ok”.

The variety of artists that come through Book Club is huge. As someone who has been fortunate enough to perform there with world-class musicians, as well as with embryonic original projects of my own, I can’t overstate how great it is to have a venue that is open-minded and actively supports artists of all genres no matter how established they are already. I asked Jack how important he thinks venues like his are to arts and culture in Yorkshire:

“I think they’re important, not really because of the spaces, but because of the people. So when you look at The Hyde Park Picture House and Wendy that’s been there ten years, and Nathan that’s lived all his life in The Brudenell, you see those great networks of people. I think that’s what you get with a venue like ours in a way that you maybe wouldn’t get if we were owned by a national company and they just brought someone in from another city to manage it”.

He continued with a poetic analogy about how strong communities of musicians and creatives are needed to keep the cultural scene thriving:

“If you look at areas that turn into desert, you need trees and some kind of hydration in order to keep the soil there and I think it’s like that when it comes to venues – if you lose these big clubs of people then it kind of takes a lot of stuff with it”.

I also spoke to Rory Mann, a Leeds-based jazz guitarist and composer who can often be found at Book Club both as a performer and an audience member. Rory is equally clear about the value grassroots venues bring to the region.

“Leeds is known for its independent, grassroots music scene around the country, and Hyde Park Book Club in particular is known as one of Leeds’ most iconic venues in recent years. These qualities contribute to tourism, boost the city’s economy and give a truly unique feel to Leeds’ already vibrant and bustling nightlife. It is vital that small venues are able to continue functioning; not only for people’s livelihoods, but for the very soul of the city.”

I decided to field my first overtly political question and so I asked Jack and Rory if they thought the government had done enough to support individual artists and creatives during the pandemic. Hyde Park Book Club received a grant from the Cultural Recovery Fund, which Jack touches on here:

“So the Cultural Recovery Fund is about making sure you can pay staff, you can pay rent, pay for your rates and insurance and all the boring stuff that means we can get to April when hopefully we can be a normal gigging venue again. But I don’t think there’s been enough support (for individuals)”.

Rory was unequivocal in his views on government support for artists:

I wanted to dig a little bit deeper into Jack and Rory’s political views and so I asked them if they thought things might have been handled differently had the outcome of December’s general election been different. Rory was characteristically to-the-point in his analysis:

“I can’t read alternate timelines unfortunately, but I have no doubt a Labour government would have been quicker to support working people at the outset of the pandemic. It saddens me when I look at other countries such as Germany and how they respect and contribute towards the arts and compare that to how much disdain the Tories show towards the arts in this country”.

“It’s a difficult one because I’m a natural Labour supporter and I’m naturally on the left but equally it’s been a few years since we’ve had a functioning Labour Party. I sympathise with lots of their views but they were a really divided party at the time and I don’t get the feeling that a high priority for that Labour Party was small businesses”.

It’s incredibly easy to fall into a slump of doom and gloom at a time like this, especially for creatives whose careers came to an abrupt halt in March and with no clear idea of when things might get back to normal. So both Jack and Rory’s overall positivity was incredibly refreshing and our short chats restored some of my optimism, reminding me just how important the communities that venues like Hyde Park Book Club foster are. Jack was keen to end with an upbeat message:

“I think hope is important. At times, we’ve ended up in these kind of death spirals with the headlines about how venues are not going to survive but I think that people can be more resilient if they imagine that the future might be better. It’s important for all of us, I guess, to look at what we can be grateful for and think about what we can control. Those people who have been externally focussed through this are going to struggle a lot more than people who have looked really close to home and said to themselves ‘what can I do in my community and what can I do to get through this with other people?”.