Amazon owns a third of the warehouse space in the country, yet continues to treat its workers poorly. Is union action a solution? 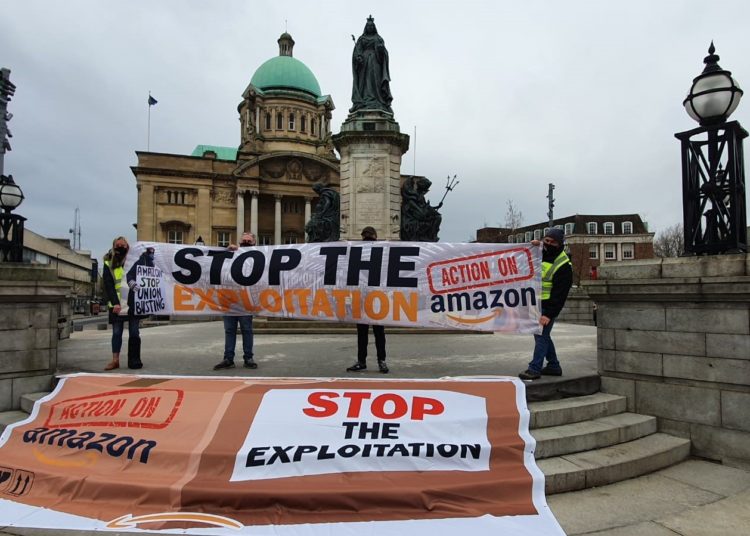 Photo from Unite the Union

It’s a staggering fact. Amazon occupies an astonishing one third of all warehouse space in the UK. But what goes on inside those warehouses, in terms of surveillance and oppressive work quotas, is now becoming the focus for renewed trade union action.

Calls are growing for a new deal for the workers whose efforts have made its founder Jeff Bezos one of the richest men on the planet and Amazon a multibillion-pound company. But Amazon strongly resists attempts by workers to gain a collective voice of their own.

Part of this huge network of warehouse space is in Hull. Tonight, Thursday 8 April, Unite the Union’s Action on Amazon campaigners will be at Queen Victoria Square Hull and the Hessle Rugby Club, Livingstone Road, to spread the word that Amazon workers can blow the whistle on poor treatment.

The union has begun a digital Facebook advertising campaign to ensure Amazon workers know that they can confidentially raise issues of concern free from reprisals by calling 08000 141 461 or visiting the Action Amazon website.

Unite executive officer Sharon Graham says that the action by Amazon campaigners is “to spread the word that Amazon workers in the Valletta Street warehouse will be able to contact us confidentially by calling Unite’s hotline”.

She added, “This corporate giant has made billions off the backs of workers. Amazon resists any attempts by workers to gain a collective voice of their own. It is now time that workers have a voice”.

From local to national

Meanwhile, as I reported on Tuesday, another Amazon story continues to make global news. This is the energetic campaign to unionise an Amazon warehouse in Birmingham, Alabama as well as the dirty tricks played by Amazon to foil the union drive. The result of the election is eagerly awaited.

One of the Yorkshire and the Humber TUC fringe events, also taking place tonight, deals with this topic. Its focus is on the way trades unions in the States mobilise to build union support by involving communities. They bring the whole community to the fight, linking class and the workplace with gender and racial justice, and employment rights to democracy.

For example, in Birmingham, Alabama the church worked closely with union organisers to support their work. Speakers on tonight’s panel of the TUC fringe event – Trade Unions, Democracy and Community Power in the US – draw on their experiences:

The focus on Amazon is important and welcome but it has to expand to encompass a broader debate and call for action about the plight of millions of workers.

Covid-19 has revealed extraordinary inequality in the UK. People in precarious, low-wage work, without the most basic rights of sick pay or steady income, have been the most vulnerable. The worst levels of covid deaths have been amongst what the Office for National Statistics awkwardly calls ‘elementary professions’.

That’s the cruel reality of the working environment that Amazon and the gig economy have promoted.

Granville Williams is editor of MediaNorth