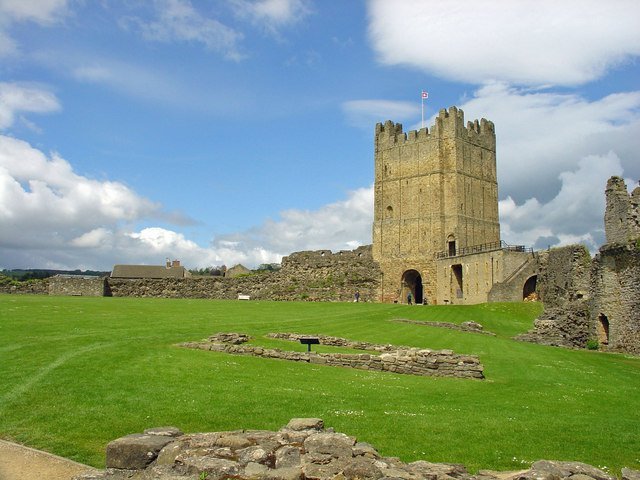 Scratched on the walls of Richmond Caste in North Yorkshire is graffiti you won’t find in any history book. It tells the story of 16 young men imprisoned in the castle, sentenced to death for their beliefs.

In 1916, 28-year-old Norman Gaudie, a well-known northern footballer and a Quaker, was imprisoned without fair trial in Richmond Castle. With him were 15 others who refused to fight in WWI, their crime – believing it wrong to kill another person. The gaolers bullied and humiliated the prisoners. On one occasion, they were frog marched through the town. Returning to the castle in a ‘bloodied’ state, they were forcibly stripped and dressed in military uniform. In their freezing, squalid stone cells, they whiled away the hours drawing on the walls. Norman and the other prisoners are known as the ‘Richmond Sixteen’.

In the days before the declaration of WWI, millions of people took to the streets to oppose the war. The government ignored all forms of protest. Military propaganda, or perhaps we could call it fake news, persuaded two and a half million men to join the British Armed Forces. By the end of 1915, so many men had died in the trenches, the government decided to introduce conscription.

The Military Service Act 1916 conscripted healthy men between the ages of 18 and 41. It included an amendment by Yorkshire Quaker MPs Arnold Rowntree and T Edmund Harvey. The amendment allowed exemptions on the grounds of individual conscience. Those claiming exemptions were conscientious objectors, or COs. Local tribunals were set up to judge whether an individual’s conscience was true. These courts, made up of military men and local dignitaries, ridiculed those whose religious or moral beliefs differed from their own. The tribunals forced many COs to work for the war effort in ‘non combatant’ roles, such as manufacturing weapons.

For Norman Gaudie and the other 15, there was no choice, they could not support the war effort; their consciences prevented it. In Britain, around 1,000 men refused to take alternative war work. They were arrested, court-martialled and imprisoned.

Fifteen million people died during WWI. Today this catastrophic death toll is acknowledged as a failure of leadership. Following the military losses in the first years of the war, Lord Kitchener determined to make an example of the CO ‘shirkers’. He ordered the men moved from Richmond Castle and shipped to the frontline. In France, they would be on ‘active service’ and liable for the death sentence for any refusal of a direct military order.

Once in France, Norman and the other COs continued to disobey military orders. They were kept in foul conditions, and subjected to psychological manipulation. For hours at a time they were hung on a fence with arms and feet tied, resembling the crucifixion. Repeatedly they were marched onto the parade ground to face a firing squad, before being returned to their cells.

“The military authorities didn’t know quite how to react. It was something quite outside their experience. And it became clear that we weren’t people that could be bullied”.

On 13 June 1916, in front of hundreds of troops, they were finally court marshalled by a field general and sentenced to death by firing squad.

But that is not the end of the story. In a remarkable twist of fate, the driver of these men’s destiny, Lord Kitchener, drowned in the sinking of the Lusitania. This paved the way for a petition to the prime minister by York MP Arthur Rowntree, which gave a last minute reprieve for Norman and the other COs.

Norman Gaudie, the Richmond Sixteen, and the other COs are more than a footnote in history. Their bravery in face of bigotry and religious intolerance led to the individual freedoms we enjoy today. Conscientious objection to bearing arms is now an internationally recognised human right.

This year we’ve learned to treasure our fragile, hard won freedoms. Today, as we remember all those who have died for our country, spare a thought too for the men prepared to die because they valued the lives of others above their own. Their sacrifice gave us the legal right to a conscience and the freedom to enjoy it.