John Heywood looks back at life at Springfield Mill, West Yorkshire in the 40s and 50s 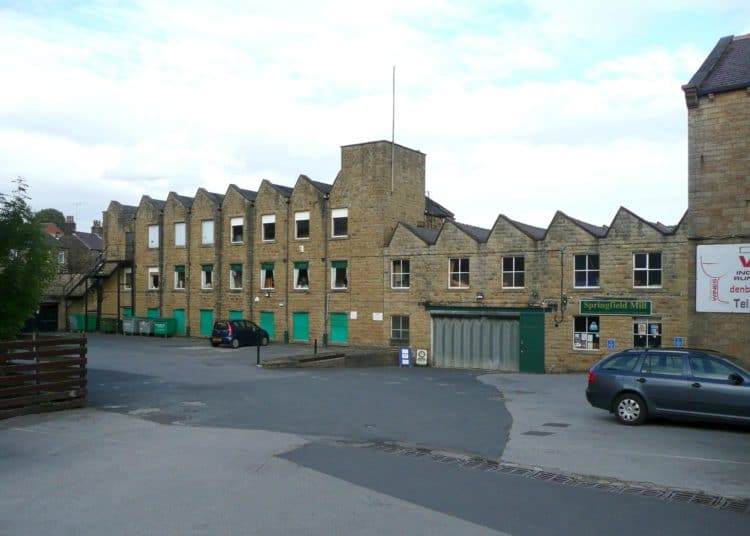 A while ago, I had the privilege of interviewing a wonderful lady called Freda. Her story of working in the textile industry is one worth sharing. It highlights vividly what working life was like in the years around the Second World War. It’s a time we often think of, as being remarkably like our own but also one which in some ways was quite different.

Springfield Mill was built by John Brownhill in the 1880s in the village of Denby Dale, south east of Huddersfield. Now more famous for its pies, it has a long history of textile production, which was a major source of employment in the area for many years.

Working at Springfield Mill therefore was almost inevitable for Freda, as she followed in the footsteps of her father, who was responsible for the steam engine, ‘Sarah’, that still powered the mill until just after the war. Several other relations also worked there.

“It all began just before Easter in 1943. School had almost been non-existent for the last two years, as due to the war there was a great shortage of teachers, and I had decided that I would be of more use helping on the family smallholding rather than sitting in a classroom without a teacher.

“The smallholding had become more and more important during the war and was subject to Ministry of Agriculture and Fisheries control that meant quotas to produce milk etc had to be strictly adhered to.”

Freda had wanted to be a weaver but the weaving shed manager at the time suggested that if she could start earlier, she would steal a march on those girls who were leaving at Easter. Three days before Easter she started at Brownhill’s, Springfield Mill.

“Days were long and hard with hours of work being 7.30am to 5.15pm Monday to Friday and 7.30 to 11.30am on Saturday mornings. This was all for a low wage. I was responsible for four looms, which never stopped. Even during our short lunch break, I had to keep going back to check that they were ok.”

Because they were dealing with “exceptionally fine fabrics” such as silk and lurex, they were unable to open the windows, for fear of letting dust into the factory. As a result, she continued, “it was so very warm and with the machinery also very noisy”.

“There were 145 different errors that could be made when weaving that were checked for. You were under a lot of pressure. The cloth was checked by an inspector whose job was known as ‘passing the piece’. If you made three errors, you were out!”

Freda opened up about the social aspects of her work at the mill. She said the people were lovely, and they enjoyed good times together on outings to the Lake District, which had been organised by the director of the mill. She also remembered employees making special efforts for Jubilee, and wings for victory days, often dressing up and raising money.

Freda’s future husband also worked for Brownhill’s mill. He had wanted to be a joiner, but the war meant that work was scarce.  He joined the firm and stayed there until the factory closed. Freda left in 1954 to work at Norton’s Mill in nearby Scissett.

The role of Springfield Mill in the Second World War

Springfield Mill found an important function during the years of the Second World War. Exempt from closure under the Concentration of Industry Act, the mill produced silks for parachutes as well as other fabrics for cargo carrying chutes. Some Khaki uniform material was also produced.

At the end of the war, the mill saw a vast programme of reorganisation, with most of the old looms being replaced by modern machinery, allowing greater productivity. The old steam engine was dismantled, and a new diesel/electric system was installed.

Following a series of changes in ownership, Springfield Mill ceased to operate as a textile mill. After several years operating as a centre for the sale and distribution of American furniture, it became the extremely popular retail and leisure outlet it is today.