Emily Shepherd shows just why the arts are so important for Yorkshire, looking at the sector's impact on Yorkshire's culture and economy. 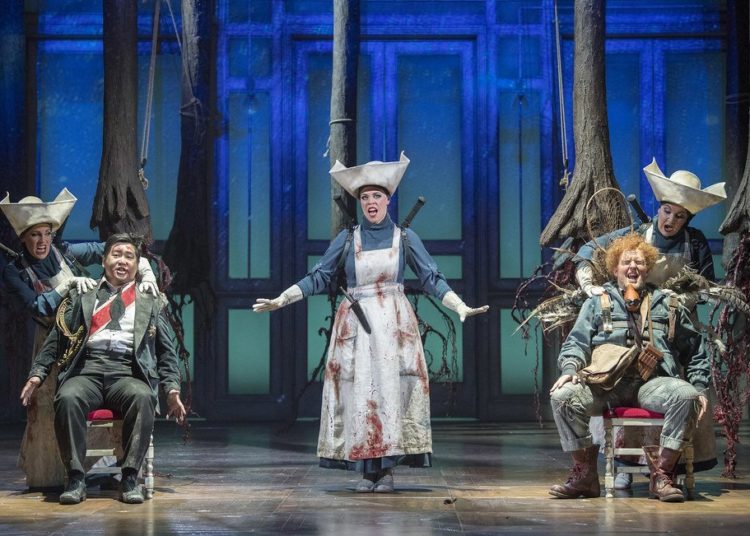 Leeds-based Opera North’s production of the Magic Flute Image by The Lowry, Salford for Creative Commons

The arts are all around us, making an appearance every day in our lives. While we’re currently missing the chance to see the latest play at the local theatre, or watching our favourite band at our nearest arena, we can still access events online, watch our favourite TV show, or read our favourite book. We can do this anywhere. So why is it so important to keep the arts alive in Yorkshire?

Conservative MP Jake Berry made a comment last month that segregated northern culture from the rest of the UK. He suggested that northern culture is primarily focused on football, whereas the South values the arts.

While his comments may also have offended southern football clubs, in neglecting the significance of the arts in northern culture, Mr Berry sparked a lot of criticism from arts businesses and people in the industry, who understand that it is an essential, successful and ever-growing aspect of northern culture.

From as far back as the Georgian Theatre Royal in Richmond, which in 1788 was the first theatre to be built in Yorkshire, to the global success of the Brontë sisters who lived in Haworth in the early 19th century, the arts have always been a significant part of northern culture.

These origins paved the way for the expansion of the arts across the county. This now includes our first-rate brass band scene, in which more than 50 bands will be representing Yorkshire in next year’s championships, as well as the many renowned theatres such as the Lawrence Batley Theatre (Huddersfield), Leeds Grand Theatre, Hull New Theatre and The Crucible (Sheffield) to name a few. The arts and culture sector in the north brings at least £2.5bn to the UK economy each year, creating over 6,000 jobs in Yorkshire in 2016 alone.

Yorkshire is also the birthplace of iconic stars such as Dame Judi Dench (York), Sir Patrick Stewart (Mirfield) and Sir Ben Kingsley (Scarborough) – all of whom have made a large impact on the world’s stage and screens. It’s evident how influential the arts have been for the people of Yorkshire, which is why comments, such as Mr Berry’s are so offensive and naïve.

Football may be at the heart of northern culture for some, but it absolutely does not apply to everyone living in the North. Mr Berry has generalised an entire population – one game can’t define an entire community. Yorkshire is so diverse – with each town and city reflecting its own customs and traditions – it’s impossible to define a community by just one aspect in a broad range of culture.

In a series of tweets, Leeds-based Northern Ballet was one of the many arts companies in Yorkshire to accuse Mr Berry of “perpetuating tropes” that northern culture is less worthy than in London.

“Culture being produced in the north is of world-class quality, vibrant and innovative, and contributes greatly to both society and the economy. We hope that one day this will be recognised by all”.

Many people can’t afford to travel to London and pay the high prices they charge to watch a show. Arts in Yorkshire are accessible to all and can offer performances that are just as good, if not better, than in the capital. When theatres and live shows are allowed to resume, I urge you to go see performances by the Northern Ballet or Opera North – trust me, you’ll be blown away by the quality.

Not only is continual funding for the arts important for professionals and theatre companies today, but even more so with their increased popularity with students in the North, who are wanting to break into the industry after they graduate.

“I chose to study in the North because the course was more about personal development and learning all-round skills needed in the industry, rather than focusing on auditions like they do in the South”.

Arts degrees and community programmes in Yorkshire provide more opportunities for those living in more disadvantaged backgrounds to pursue a creative outlet.

I remember being a part of the local youth drama company when I was younger and it brought me so much joy. I was a part of a group who had the same interests as me and we were able to put on some wonderful productions for our families and friends. This creative outlet was really appreciated by me because arts subjects are not compulsory in schools, whereas sports were and were heavily regarded as something everyone should aspire to do well in.

Community arts programmes often get overlooked because London tends to be at the forefront of the arts, but they really do amazing work for the community. Rachael Williams, a recent drama, education and community graduate from York St John University, said:

It’s important we continue to boost funding in the North for students like Mia and Rachael and other local arts companies to achieve their dreams, no matter where they live.

As an outlet of escapism for many during these uncertain times, the arts are as important as ever. This aspect of culture holds significant value in people’s lives, with many wider benefits. The arts are universal and to devalue their role in northern culture is, I would suggest, both narrow-minded and ill-informed.

Emily is currently studying a master’s in journalism at Leeds Beckett University. She graduated from York St John University in 2020 with a degree in Media and English Literature. Emily particularly enjoys writing about arts and culture, student life and film and TV. In her spare time, you’ll find her at the local theatre or ticking off English Heritage sites she hasn’t visited yet.