The film 'The Last Trip' is inspired by stories of Hull's fishing industry. The film is about a crew of retired fishermen who steal a trawler for a final adventure 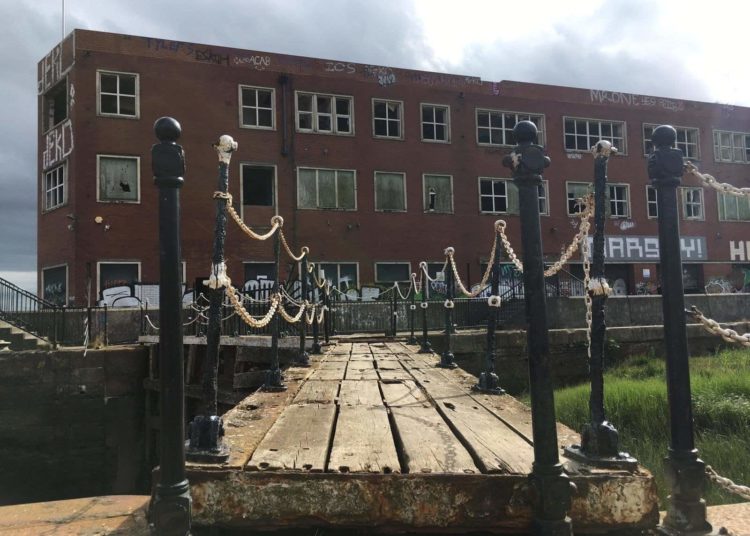 With tall grasses stretching into the distance, it looks like a nature reserve. Yet this urban marshland was once home to the UK’s largest distant-water fishing fleet. Today the derelict remains of St Andrew’s Dock in Hull are a harsh reminder of what the city lost when Iceland finally emerged victorious after three bitterly disputed Cod Wars.

What happened to Hull’s fishing industry?

Almost overnight, an industry vanished as trawler owners sold what assets they had and thousands of skilled men were put out of work. In the 1980s, the dock’s then owners – a property arm of Associated British Ports – re-developed part of it as a bland retail park. The rest has been sadly left to rot.

A handful of vandalised buildings survive while the dock itself is silted up. At the lock, the old dock gates hold back the muddy brown waters of the Humber. It’s the spot where an estimated 6,000 men sailed to their deaths over the decades, either as victims of doing what many regarded as the most dangerous job in the world, or as casualties of war.

This huge loss of life is almost unknown outside Hull, but the scars still run deep in the city. Almost everyone knows a husband, a son, a brother, an uncle, a cousin or a lover who never came home.

While the gleaming offshore wind turbine towers being assembled a few miles along the river at the new Siemens Gamesa factory offer hope for the future, the old dock is still a painful reminder of the past.

Currently under mixed private ownership, progress at the site has stalled, mainly because those with a claim on the land do not have financial resources to breathe new life into it. Recently, Hull City Council announced it was starting work on a new planning masterplan for the dock with the aim of attracting new investor interest.

However, before that work is completed a very different kind of spotlight will be shone on the dock.

For a new feature film is about to be released taking its inspiration from some of the many stories of Hull’s fishing industry.

The Last Trip has been written, produced and directed by Andrew Fenton, the son of a trawlerman, who is determined to highlight the fate of the old dock. He’s set up a new film and TV company to bring it to the big screen, after previously running a successful commercial design business.

A comedy, it tells the fictional story of a crew of retired Hull fishermen who steal a trawler for one final adventure.

Fenton says his motivation was partly the result of his own frustration at seeing the old dock crumbling away before his eyes.

“You go to places like Liverpool and see what they have done with their old docks and then you come back here and see this”, he says with a shake of the head. “What’s even worse is that it’s still a mess after all this time. The last generation of people who sailed on the trawlers and worked in the industry is nearly gone.”

His own father Stan, who worked as a cook on the trawlers, died recently, but only after playing his role as one of the lead characters in the film.

In a deliberate move, Fenton wanted The Last Trip to be 100 percent Hull and decided to use real-life trawlermen as its stars. As a result, the gang also includes ex-trawler skipper Mason Redfearn, former chair of the Hull branch of the British Fishermen’s Association Ron Bateman, and leading members of the Hull Bullnose Heritage Group Ray Coles and Ray Hawker.

Despite being in their 80s and having no previous acting experience between them, they all threw themselves into the roles.

Bateman, who campaigned alongside Alan Johnson to secure belated compensation for fishermen following the Cod Wars and the collapse of the distant industry, said:

“None of us had done anything like this before but Andrew was very encouraging and it was a great
experience. Once you have been fishing on a trawler in the middle of an Arctic storm, you can pretty much turn your hand to anything.”

At the helm of his first film project, Fenton explained:

“I wanted to make a film using ordinary people rather than actors because it’s a story about real people. I also wanted to make a comedy to make people laugh even though there’s also a serious message in there about the importance of Hull’s fishing industry and how a lot of it has largely been forgotten.”

He said the veteran trawlermen were a joy to work with.

“At first, some of them took a bit of persuading but eventually the guys took to it like ducks to water. Some of the filming was pretty hard and literally took all day at times but they never complained, they just got on with it.”

Support from some familiar faces

Everyone else in the film is either from Hull or has a connection to the city and, again, mostly come from the streets rather than drama school.

He lost his brother in what became known as the Triple Trawler Tragedy in 1968, when 58 crewmembers perished after three Hull ships were lost in storm-lashed seas off Iceland.

He said, “One of the greatest pains for my mother was that she had nowhere to go to grieve. I am sure many of the families who lost loved ones still feel the same today.”

Regeneration of the docks is long overdue

Fenton was keen not to bring politics into the film – Alan Johnson plays a postal worker unwittingly delivering trawler parts to the gang as they prepare to take their rusting old ship back out to sea – but hopes it will help kickstart the dock’s long-awaited regeneration.

Shooting started four years ago. Special computer-generated scenes showing Hull’s St. Andrew’s Dock and the nearby Hessle Road in its fishing heyday have been created for some scenes.

A scheduled cinematic release date last year was postponed because of the pandemic but it’s hoped the film will be screened in selected Odeon cinemas soon.

“It’s mostly an upbeat comedy but there are some poignant moments too. Hopefully, it will provide a good night’s entertainment,” said Fenton. “It was written locally, it was produced locally and recorded locally. The key factor for me was that everyone in the film has either got some connection with the fishing industry or they’re just from the local area.”

For more information on The Last Trip visit www.northernfilms.co.uk