The Dresser is only playing at the Bradford Alhambra until Saturday - and is well worth seeing! 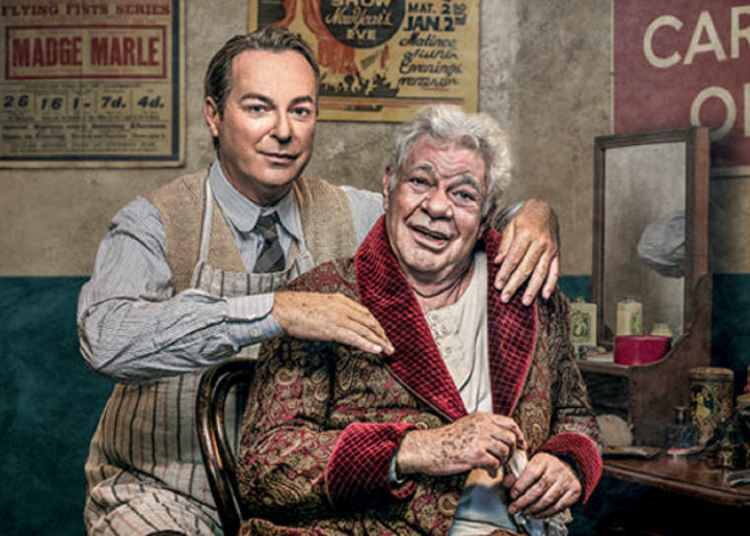 The Dresser, with Julian Clary and Matthew Kelly

The Oscar-nominated 1983 film version of The Dresser, starring Albert Finney and Tom Courtenay, was filmed in several locations around Yorkshire, including at the Alhambra Theatre in Bradford. This was just before the theatre closed for extensive refurbishment in 1984.

The film’s producers were looking for a 1940s touring theatre and they chose the Alhambra Theatre, which at that time, hadn’t been renovated, so it still looked as it did when it was built in 1914.

Fast forward to 2022 and the Bradford Alhambra is again the perfect setting to host the stage version of The Dresser and is worthy of your time, though it only runs until Saturday 12 February.

It is 1942 and in a war-torn provincial theatre an aging actor-manager, known to his loyal actingcompany as ‘Sir’, is struggling to cling on to his sanity and complete his 227th performance of KingLear. For 16 years Norman, Sir’s devoted dresser, has been there to fix Sir’s wig, massage his ego,remind him of his opening lines and provide the sound effects in the storm scene. It is down toNorman to ensure that in spite of everything, the show goes on.

As Norman, Julian Clary was perfectly cast, bringing to the role his usual sarcastic comments that were directed at his master, Sir played by Matthew Kelly. It took nearly 15 minutes for Kelly to arrive on the stage – and when he did, his authority and commanding presence lit up the performance, drawing in the audience.

His character is a complex one as he realises the passing of time, the loss of youth and the fact that his days are numbered. We never get to see him playing King Lear, only hear him playing the role from the wings.

As the softly spoken Norman, Clary’s performance flowed effortlessly as he took command over Sir. But in the second half, we witness years of pent up aggression come to the fore in a moving monologue, as we see Norman’s cool and calm persona crack, after over a decade of working with Sir.

His character was one that you could warm too – he came across as though he was running the show, which at times he is, as he holds Sir together with the maxim “The Show must go on”.

The poster advertising the play leads you to believe that there are only two actors in The Dresser when in fact there are several others who appear during the performance including Her Ladyship, played by Emma Amos, who appeared weary and subdued after years of being married to Sir.

Rebecca Charles, as stage manager Madge, played her role with authority. It was wonderful to watch the interplay between these characters, with Sir setting aside his usual brusque demeanour and instead showing a more respectful attitude towards Madge. And Natali Servat, as Irene the young actress, brought a youthful and enthusiastic element to the evening which contrasted well with the weariness of Sir.

With many of the audience still wearing their masks, the irony of watching a play set in 1940s wartime Britain was not lost.

An engaging evening that was evocative yet highly entertaining brought to life with stunning performances from all concerned. Rich in comment moments as well as being utterly poignant. This show is set to go on and on.