Amazon's pandemic growth comes with a backdrop of poor working conditions and anti-union tactics caused them to take action. 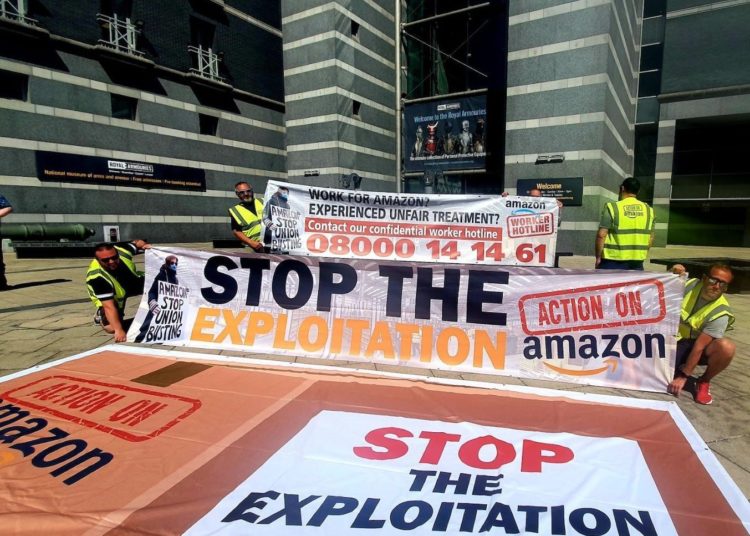 Photo from Unite the Union

Online sales giant, Amazon, recently reported that its first-quarter profit tripled after the pandemic fuelled a year of online shopping. But trade unionists say this profit is against a backdrop of poor working conditions, including mandatory overtime and anti-union tactics preventing workers from speaking out within the workplace.

Last week, activists in Leeds completed a week of action against the multibillion-dollar business. On Friday 11 June, Unite the Union unfurled a giant banner outside the Leeds UK corporate office in Beeston.

The group called on business owner, Jeff Bezos, to sign a declaration of neutrality, in a bid to guarantee workers’ freedom allowing them to have a “collective voice” in their workplace and form a union “without fear”. The banner highlighted the union’s whistle-blowing hotline for workers within the UK and Ireland to expose any poor treatment they faced.

This news comes after it was reported that in the first three months of 2021, the company revealed a profit of £5.8bn compared with £1.8bn the year prior.

Since the start of the coronavirus, Amazon’s workforce has sky-rocketed. The retail giant now has more than 55,000 employees in the UK, having expanded rapidly on the back of soaring sales. The company saw a 44 percent increase in sales in the first quarter of this year alone.

But what conditions are employees up against?

Sharon Graham, Unite executive officer says, “Amazon’s profits have tripled off the backs of workers who have been essential during the pandemic. But the company continues to be plagued by reports of poor working conditions and anti-union tactics.”

“Workers have serious concerns about issues such as bullying, mandatory overtime, intense surveillance, break-neck production targets and much more besides. Amazon workers need an independent voice to stand up against injustices in the workplace.”

Amazon workers’ privacy and welfare on a global scale

Meanwhile, Amazon has been under the media spotlight since issues with surveillance of workers came to light, particularly surrounding reports on the ongoing legal pursuit against Amazon in Spain, after the company was accused of using Pinkertons to spy on warehouse workers planning to strike in Barcelona. The recent vote in Bessemer, Alabama also showed how unionists came together to tackle the monitoring of workers throughout the workday.

The company  faced backlash when working conditions also came under scrutiny, after research by the Strategic Organising Centre reported an epidemic of workplace injuries. It found Amazon workers experienced 80 percent higher rates of serious injury compared with all other employers in the warehousing industry in 2020.

However, Amazon recently pledged its commitment to workplace safety for workers in the US. On Thursday 11 June it announced its first ever five-year partnership with the National Safety Council, tackling the most common workplace injuries including musculoskeletal injuries, like sprains and strains.

With demand for online sales continuing and with ongoing pressure from trade unionists, it’s hoped that this retail giant will set an example for employers globally by supporting the rights of its workers.