Sheffield activists are calling on the government to scrap new proposals for immigration, as part of Refugee Week. 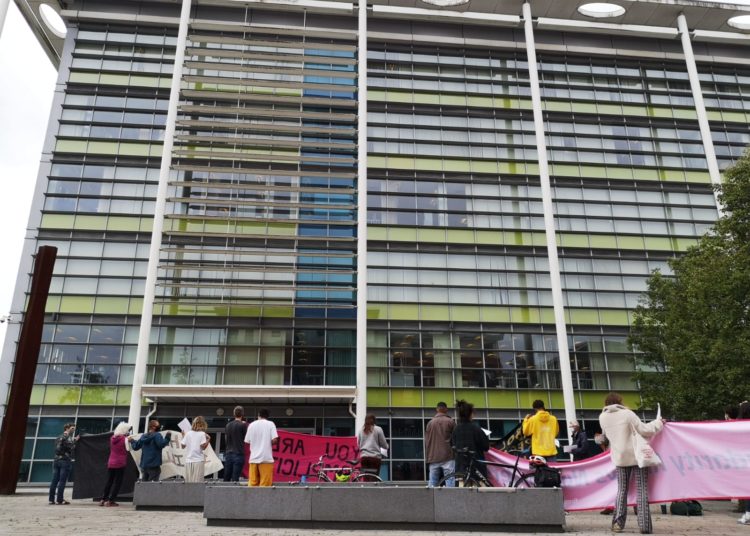 Today, activists across Sheffield are taking action against Priti Patel’s ‘New Plan for Immigration’ and the policy of mandatory immigration reporting. Migrants, asylum seekers and solidarity groups will be protesting today, as part of Refugee Week. They will be calling on the government to scrap new proposals for immigration.

Groups across Sheffield will carry out different activities within the ‘Sheffield Refugee Week Day of Action! New Plan, Same Old Hostile Environment’ protest. The protest started first thing this morning at Vulcan House and will last until 6.30pm. The aim is to draw attention to the daily harm and violence that occurs at immigration report centres.

Campaign organiser Boucka Koffi says, “We believe that Britain has a responsibility towards asylum seekers. This event is a way for us to show that refugees are not alone, that there are a lot of people standing in solidarity against these proposals”.

The new plan for immigration

Patel’s plan for immigration is coming under increased scrutiny, with protesters saying it intensifies the ‘hostile environment’ for migrants within Britain. Swathes of human rights groups, academics and migrant justice organisations have condemned the government for the new proposal.

The plans include deporting asylum seekers whilst they are still in the asylum process, creating a two-tier system for those entering the country from different routes. And the intention is to introduce what the groups are calling a “deadly push-back” of policies in the Channel, a tactic used in the Mediterranean that has led to thousands of deaths.

Protesters today are also focusing on the issue of immigration reporting. This is an ongoing policy requiring people subject to immigration controls, including those seeking asylum in the UK, to attend physical reporting appointments at recurring times over a weekly, fortnightly or monthly basis.

But what impact is this having on individuals who are seeking asylum in the UK?

Boucka says he’s had first-hand experience of mandatory reporting and the effect it has. He states:

“It is a degrading process, therefore for some of us who come from what we deemed repressive regimes to come to a country, which is meant to be a democratic country and become subject to this type of conditions is demeaning. It is an abhorrent practice and it needs to be stopped.”

Campaigners say this process doesn’t need to exist. It is a stressful process leading to anxiety as a result of the harassment experienced while in reporting centres, money spent on travel to attend the meetings, and fear surrounding being detained or deported once they go to the centre.

This has been an ongoing issue within Sheffield. Campaigners met with Sheffield MPs Olivia Blake and Louise Haigh in October 2020, raising their concerns about the issue. Both MPs offered their support. Olivia Blake raised the issue in an early day motion in parliament, aimed at stopping the mandatory in-person reporting.

Protesters hope today will draw attention to the “inhumane practice”. They believe Sheffield will be the first place to end mandatory in-person reporting, and demand an end to the use of immigration raids vans across the city.

Support for the event

Recently, campaigners met with Sheffield MPs Paul Bloomfield, Olivia Blake and Clive Betts who oppose the new plans and have offered support to the local campaigners.

Sheffield Hallam MP Olivia Blake pledged her support for the event in a public statement:

“Since becoming the Member of Parliament for Sheffield Hallam I have spoken to many constituents who have suffered from the barbarity of our asylum system. From being forced into unsafe and inappropriate housing, having to report in-person at Home Office reporting centres at the peak of the pandemic; or going long periods in unhygienic facilities without access to adequate food or healthcare, the Hostile Environment is still in full force.

“We need an asylum system that takes human dignity as its starting point, which enshrines fairness and justice for all.”

The importance of raising awareness

Worryingly, in 2020 around 8,500 people arrived on small boats across the English Channel in 2020, a dangerous journey many refugees have to make.

Activists hope their action will promote opposition against the bill and offer support to those seeking asylum instead of the inhumane conditions many asylum seekers face.

Boucka added: “We believe if more people join us, they will create better conditions for all refugees worldwide. We need to see refugees as human beings and create compassion for those seeking asylum.”