Check if your MP is among the list of those who helped to defeat the amendment to the agriculture bill, that would have maintained food standards. 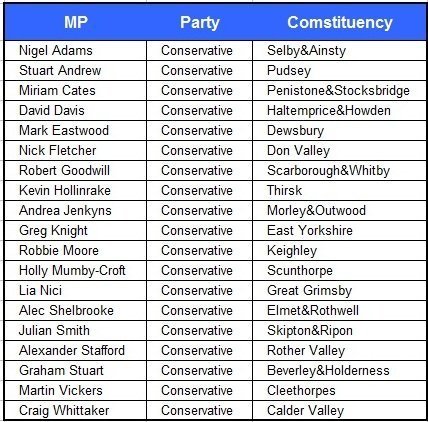 Last Wednesday an amendment to the Agriculture Bill came before MPs. It would have prevented the government agreeing any free trade deal that allowed the import of lower-quality agricultural and food products into this country. Amazingly, the amendment was defeated by 328 to 277. Some 19 MPs from the Yorkshire and the Humber region, all from the Conservative party, voted against it.

Check if your MP is among the list of those who helped to defeat the amendment:

It can only mean these MPs are happy to see the quality of British food reduced. The amendment was tabled by the Conservative MP Neil Parish who represents the rural constituency of Tiverton and Honiton in Devon. His amendment, which they voted down, would have seen a new clause added as follows:

International trade agreements: agricultural and food products
(1) A Minister of the Crown may not lay a copy of an international trade agreement before Parliament under section 20(1) of the Constitutional Reform and Governance Act 2010 that contain provisions relating to the importation of agricultural and food products into the UK unless they have first made a statement confirming that—

(b) any agricultural or food product imported into the UK under the agreement will have been produced or processed according to standards which are equivalent to, or which exceed, the relevant domestic standards and regulations in relation to—
(i) animal health and welfare,
(ii) plant health, and
(iii) environmental protection.

The amendment’s defeat was all the more shocking because the clause was merely an affirmation of what was in the Tory manifesto just six months ago which declared:

“We will defend British industries from dumping and other anti-competitive practices from overseas.” and “In all of our trade negotiations, we will not compromise on our high environmental protection, animal welfare and food standards.”

The amendment had the backing of the National Farmers Union and the Country Landowners Association as well as the Environment, Farming and Rural Affairs Select Committee. The fact that the government did not support the amendment should concern us all. The excuse given by Victoria Prentis, parliamentary under-secretary of state for environment, food and rural affairs (HERE column 295), was that it could somehow affect the export of goods such as whisky and potatoes. She explained that an assessment of the standards of other countries with whom we are trying to negotiate continuity trade agreements, could not be done by December – a deadline that the government has imposed on itself.

The report stage of the Agriculture Bill was followed by a debate and third reading. It now goes to the House of Lords for consideration. The hopes of many farmers will be resting on peers to protect then from low priced and low quality imports in future.

Choose your pandemic leader – would Boris make the cut?