Charlie McCarthy looks at the reality of reopening schools, with personal testimony from a teenager affected and professional evidence from the scientific community, to show just how how difficult both home schooling and reopening schools are. 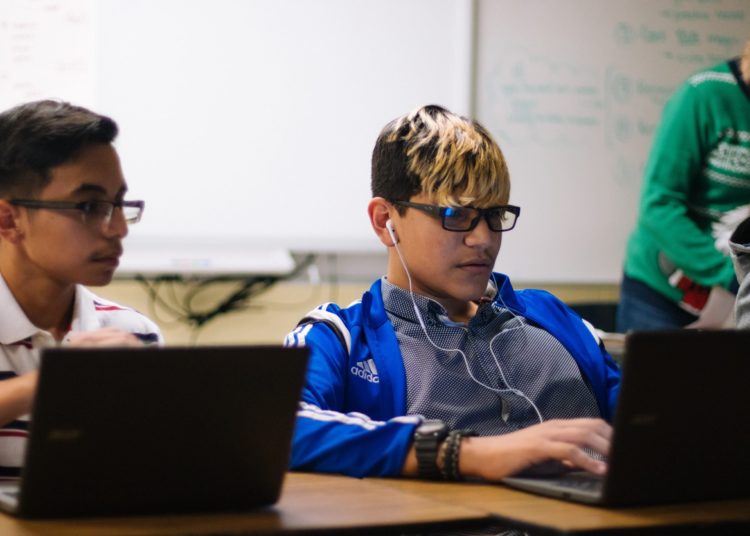 Children in a classroom, photo by Jeswin Thomas on Unsplash

All schools in England will reopen on 8 March. Prime Minister Johnson said previously, “The first sign of normality starting to return should be pupils going back to their classrooms”.

This ‘big bang’ approach will see an estimated 8.89 million pupils and nearly 1 million school staff mixing together in England on that day – 15 percent of the total population of England. We’ve previously reported on the misgivings in some educational and health professionals over this push to return to ‘normality’.

To get fresh insight, I interviewed Ryan, a Year 11 pupil from a Yorkshire state school, who has been home schooling for much of his GCSE course in Year 10 and Year 11. I asked him what it’s been like.

“Personally, I have full internet access but if the internet drops, if you have no internet for half an hour, you’ve missed out on that lesson. You then have to email your teacher to inform them that your internet connection dropped or disconnected and then you have to catch up at lunchtime or after school. It’s really stressful.”

He admits there have been some aspects of home schooling that he’s enjoyed though, particularly not having to wake up so early.

“Some people live 40 minutes away from school. With home schooling you can wake up an hour before school starts, have breakfast and get ready and you’re pretty much at your desk. However, it’s harder to concentrate at home. You’ve got your home computer, some people have an Xbox next to them. At home you can walk off, the teacher doesn’t know if you’re still there. People are easily distracted, playing games on their phones. It you are distracted, the lesson’s gone.”

Ryan says returning to school on 8 March is going to be extremely difficult, after months of struggling at home.

“All of a sudden, they’ve rushed us back. Also we could be doing mini exams. The not knowing what’s going on is kind of worrying to us because exams are putting us under more pressure. We’ve already been through a lot of pressure this year. We’ve done mocks on our home computers but school have said that they were not under exam conditions, they won’t count towards our predicted grades. We’d like to know in advance what’s actually going on.”

Like many people, including teachers, staff and parents, Ryan is also worried about the health risk of being around so many people again after isolating since Christmas.

“Personally I think with all the kids in corridors it’s the easiest way for the virus to spread. In small classrooms and busy corridors it will spread easily. It’s a bit much to reopen schools straight away. I’ve been talking with a few of my friends and they all think the same way. Schools are a breeding ground for the virus. At the end of the day, it’s the government telling us what to do. At the end of the day we have to cooperate.”

As well as returning all children to the classroom, the government wants to be seen to be addressing the issue of ‘lost learning’ that this current cohort of children are perceived to have experienced. Schools in England are to be given £400m of dedicated funding to address this – by running summer schools over the coming summer holidays and expanding one-to-one and small group tuition to help pupils who need to ‘catch-up’.

Psychologists are concerned that this focus on lost learning due to the pandemic misses the mark. Dr Dan O’Hare, co-chair of the British Psychological Society’s Division of Educational and Child Psychology, says:

“Many children may have seen their families struggling with sudden unemployment, loss of earnings or grieving the death of a loved one. Vulnerable children and families from disadvantaged communities may have spent the lockdown wondering where their next meal is going to come from, or how they’re going to keep the roof over their heads.

“Whatever a child or young person’s circumstances, we can’t assume that the right thing to support their recovery and wellbeing is for them is to be in lessons for longer each day. The voice of children and young people has been noticeably missing from this debate and it’s essential that they are consulted and their thoughts and feelings considered as part of the decision-making process about the return to school”.

Dr O’Hare, explains, “What really makes a difference in children’s attainment is high-quality instruction and high-quality feedback, delivered by teachers, who are best placed to assess children and young people’s gaps in knowledge. It’s important that children know that education and learning is a lifelong skill, not a sprint and it’s vital for their psychological wellbeing that the rhetoric around ‘catch up’ doesn’t detract from their achievements and progress during lockdowns”.

In the meantime, in England 1.4m children claimed free school meals in January 2020, which amounts to 17.3 percent of state-educated pupils. Perhaps the government needs to think about addressing more fundamental needs than cramming in extra maths and English lessons this summer. Manchester United and England footballer Marcus Rashford said:

“The numbers recorded here just reinforce the need for urgency in stabilising households … we must act now to protect the next generation and the most vulnerable across the UK”.

It remains to be seen whether this latest move by the government will lead to further local or national lockdowns later in the year, as the virus once more takes hold. As the social and educational divisions deepen, and with the country not yet out of the woods with the virus, all eyes are now on England’s schools.