Is a vintage record player bought on Barnsley market as good as a pie? 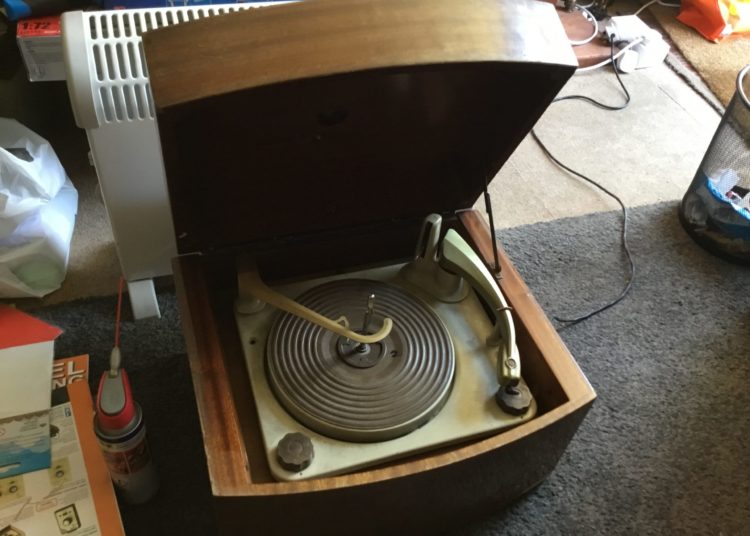 NO IT’S NOT SPELT WRONG! I know, 110,000 people complained to the BBC about its North Korean-style Prince Phillip coverage, including 116 who complained that it was too easy to complain about it – but whatever you’re thinking, you’re wrong.

Talking of North Korea, I’ve got a friend lives there. I asked her what it was like.

Anyway, I hear you asking, why isn’t this column about a pie? The 14 people each week who regularly miss the point of these articles (including one very kind soul who suggested I obtain one brand of gluten-free pie by that mail order they have nowadays), demand a vicarious comfort-food experience, not some meta-textual nonsense about old record players.

Doesn’t fit the stereotype. It isn’t even stereo.

It’s got two speakers though. And a lovely oak veneer. It’s in pretty good shape except for a couple of springs that make the record arm go back and forth. The sound is as good as 1960’s record players got. All mids and bottom-end, those frequencies that digital music strips out so it’ll compress into an mp3e or mp4.

All the ones that make you feel good.

It always strikes me as quaint that people spend hundreds of pounds on headphones that try to put back what’s been taken out by the process of sharing music online. About 80 percent of whatever turns you on has to be removed in order to compress the file sufficiently to enable online sharing.

If 80 percent of it is missing, how can it feed our hunger for the joy we crave in the harsh realities of life? Those still dreaming of something with meat and a crust will already see where this is heading. This Pye Black Box needs a clean, a bit of a service and then it’ll sound as good as when it was new.

That won’t mean perfect. You’ll have to be there, in the room to hear it and you won’t be able to send a video of it to a load of people you barely know but seem keen to impress.

Same as with pies. Upstairs in Barnsley Market, still closed off till restrictions are lifted, Paul’s café slops out pie, peas, gravy and chips, (mint sauce optional) cheerfully and cheaply via the medium of a spoon with a number on it in felt tip which is then bellowed over the hubbub so you can sprint across and hope no-one else nabs it. Throw in a cup of tea and a slice of bread and butter and say a fond farewell to a whole fiver, like Trevor Howard to Celia Johnson in Brief Encounter.

This Pye, an iconic blast of a part of the past we can fondly recall without revisionism, didn’t even cost that. Three quid. I repeat; three measly quid.

On a website selling antique sound reproduction equipment, based, need we add, in that London, a similar item is currently on sale for £450.

Well, for a start, my son bought it on his first trip out after restrictions were lifted on non-essential retail. Also, it arrived despite Jack-and-the-Beanstalk style requests not to “bring home any old shit again”. At a time when people, of necessity, queued for hours outside Primark to buy new socks and pants, it was one thing we didn’t need, especially as his collection of audio gear, from a 1929 Decca wind-up gramophone, to a 1970’s Fidelity Radiogram, wasn’t really lacking anything except space to put it all.

But that’s the thing about culture: we don’t actually NEED any of it, from Beethoven’s 9th to Russ Abbott’s Atmosphere (though I preferred the Joy Division original myself). From Swan Lake to Walker Texas Ranger, from Kate Tempest to that dreadful Hawaii 5-0 remake, from the Enigma Variations to The Haywain, we could survive without all of it.

Except, as we’ve found over the last year, it’s the unnecessary stuff that makes it worth filling your face in the first place. We’re more than just a Dawkins-esque circle of life that exists to exist some more. This much is evident to anyone who’s ever brought home pie & peas and then dropped a scratchy copy of Twist & Shout onto the turntable of a Pye Black Box.