Pen Hemingway looks at the history of The Retreat, a Quaker-run asylum in York, and at some of the reasons people were admitted. 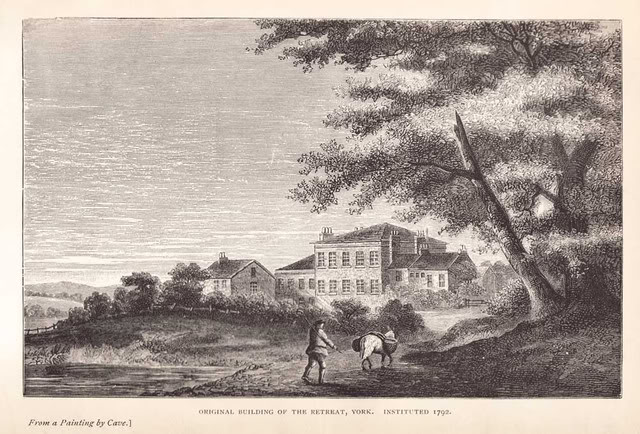 In the late 18th century, Yorkshire led the way in progressive, enlightened treatment of those considered insane. We live in an age where everything failed, bad or crony-created, is labelled “world-beating”. But in this case, there was a York asylum which truly earned the accolade.

In York, ‘The Retreat’ was founded by Quaker, William Tuke in the 1790s and soon, medics and philanthropists from all over the world were making pilgrimages there, to see how it was done. Here, the patients were treated with kindness, and were not chained to walls, sitting in their own excrement and punished for their illness, as elsewhere.

However, while treatment at The Retreat was definitely progressive for its day, the institution’s records give a sad and shocking insight into the reasons people were certified for admission. Family disapproval, drinking too much, what we would now describe as depression or PTSD: all could result in life-long incarceration.

Asylum records are like hens’ teeth, but The Retreat’s records survive fairly intact, at the Borthwick Institute in York. On admission, patients had already been ‘certified’ and these certificates from the patients’ home doctors were placed in the admission records. Some patients were in a revolving door: admitted, discharged as cured, re-admitted. Others entered the asylum only to leave it years later, destined for the simple Quaker graveyard in the asylum grounds.

Question 4 on the certificate, was: “Supposed cause of the insanity?” Sometimes doctors left the reasons for certification blank, or said words to the effect “Search me!” A common reason for admission was “Religious melancholy”, or simply “Religion”. At the start, most patients were Quakers, but as time went on, people were admitted on much wider criteria.

In 1838, Daleswoman Margaret Thwaite was diagnosed as “frantic”. The cause was given as “Religion”. A more likely explanation is that, while most of her family moved to Pontefract, Margaret had been shunted off to live in a secluded cottage in the Dales to care single-handedly for her mentally ill mother “who has been many years in a state of mental excitement chiefly connected with religious subjects”. Strangely, Margaret’s mother was never admitted, but Margaret herself deteriorated and at 24 was admitted to The Retreat.  She was said to have been ill for 4 years, prior to which “… there was nothing peculiar in her previous habits or manner and no unusual weakness”.

Typical Daleswoman, Margaret continued to try to knit; over the years, different doctors’ handwriting recorded her decline. Margaret was to spend many decades in the asylum and never saw the Dales – or anywhere beyond The Retreat’s walls – ever again. Her treatment included bleeding and blistering. As the decades passed, she understandably became more manic and disorientated until she could barely speak coherently at all. Women seem to have been more likely to be admitted for “religious excitement” and, like Margaret, less likely to make it back out into the world again.

Even in an enlightened asylum, women were admitted for what we would now recognise as postnatal depression. “C.D of N” was a 38-year-old laundress whose “insanity” was triggered by “puerperal fever” – an infection caught during delivery. She was diagnosed with “religious melancholia”, admitted January 1835 and discharged March 1837. She was treated with morphia.

The Retreat was a private asylum, but seems to have taken patients from different social classes – particularly if they were Quakers – patients like textile worker Phoebe Bottomley, who “previous to the demise of her husband, spun on the Jenny sometimes”. The cause of Phoebe’s insanity was listed as her husband’s sudden death. She had refused food and tried to take her own life.

Doctors of the early 19th century did not yet have the formal diagnoses of anorexia or depression at their fingertips – but the patients’ perfectly understandable reactions to catastrophic life events recur over and over in The Retreat case notes. A patient whose name recurs constantly in the account ledgers, Hannah Ponsonby, aged 56, had dyspepsia and giddiness due to “the sudden Death of her husband and certain unfortunate events”.  She was garrulous and opinionated, so the doctors tried opium, tonics, then sedatives, applied a blister to her head and purgatives, before resorting to the “straight waistcoat”. Grief and shock drove Hannah to The Retreat, but her talkative nature seems to have kept her there.

In 1800, Ann Jepson, aged 25 from Leeds, was certified with what would now probably be seen as paranoia: she had “strange notions … certain Persons, whom she named, had designs upon her life and that the knife, and the coffin, were already prepared for her”. Her family informed the doctors she was worse around the time of the full moon. The doctor solemnly recorded this as fact.

Here are just a handful of the most interesting Question 4 answers, from the 1820s. They give us some insight into just what was considered “insane” in Georgian Yorkshire (and beyond, as The Retreat’s patients came from all over the UK):

Some of the assessing doctors gave the patient’s own opinion some weight: “Uncertain; he thinks he has not been as humble as he ought to have been”. Other diagnoses were less patient-led:

The Retreat may well have been a pioneer in terms of its treatment of its patients, but many of us will read those lists and be grateful we had the narrow escape of being born in somewhat more enlightened days that allowed us to avoid ending up there. All the more so when we come across surely the most Georgian cause for insanity of all: “Primarily drinking British gin”.

Ok Rehab specialises in addiction treatment including for alcohol. If you are struggling with addiction please reach out for help.