Peter Garbutt, in his first article for Yorkshire Bylines, gives us all a glimpse of hope for UK biodiversity. New habitats have been set up with ponds and wetlands, with a variety of wildlife and species, including the rare Great Crested Newt. 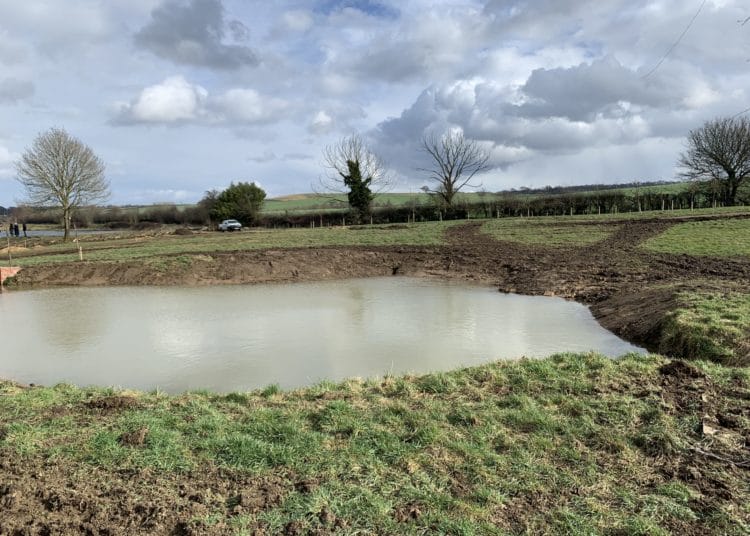 We hear all too often of yet another species going extinct, or moving up the endangered scale to the red list. So it comes as a wonderful surprise to come across a successful scheme restoring habitat for an endangered species: great crested newts.

Wildscapes CIC Ltd, funded by Defra and Natural England, has just recreated its 50th habitat for great crested newts in Derbyshire and South Yorkshire. It’s in Thrybergh Country Park in Rotherham and forms part of a memorial garden to honour victims of Covid-19.

The habitats comprise ponds (where the newts will mate and feed), grass wetlands (where they hunt invertebrates), and dense shrub copses (where they can find respite from the winter cold).

Great crested newts are the UK’s rarest species of newt, and are internationally important, so, while it isn’t on the red list, it’s encouraging to see care being taken to ensure it survives and thrives.

The species gets its name from the crest grown by the male in spring to attract mates, which it does by wafting it about in graceful dance-like movements to spread pheromones. The crest is lost once mating has taken place.

It’s the largest of the UK’s three species of new and is easily distinguishable by having a warty skin texture. Each newt has a unique pattern of black dots on its orange underbelly, much like humans have unique fingerprints. This helps scientists studying the animals to identify and track their movements.

The interconnection of newts and species in these habitats

Alongside the newts, there will be many other species taking advantage of these habitats; amphibians, fish, insects, birds, all will benefit. The great crested newt sits high in the food chain, being a voracious consumer of frogspawn, insect larvae and imagos, and even of tadpoles of other newt species! They themselves are predated by birds.

The complexity of habitats – how the food chain works, what kinds of plant growth is needed – is often ignored by humans in our never-ending quest for development. Planning regulations were changed recently to introduce a complicated calculation called ‘biodiversity net gain’.

The biodiversity challenges that developers face

Developers have to demonstrate how their development will bring about greater diversity. In my role as a councillor sitting on a planning committee, the most I’ve seen is hedgehog runs, bat boxes, swift bricks, and native shrub and tree planting.

The calculation ignores the interconnectedness of species, from soil bacteria, mycelium, invertebrates, mammals and birds, to all the different plants needed to support the richness of the diversity. It’s early days yet with this new tool, but I have yet to hear of a development where bats have made use of their new homes.

The exciting future of biodiversity and new habitats

It is nevertheless exciting to see that government has begun to recognise the vital part biodiversity plays in our lives. But it’s the role of organisations like Wildscapes and the Wildlife Trusts that is vital in pushing forward this agenda. Their skills and understanding, their outreach, and their lobbying power are needed to bring forward schemes like this successfully.

I look forward to plans that will save our raptors, subject in our times to being shot or trapped on moorlands dedicated to grouse shooting. To bringing beavers back into our rivers to help build a natural resilience to flooding. To safeguarding mountain hares, so often caught and used in stinkpits.

And to the reflourishing of our sadly depleted insects – the bees, butterflies, beetles, and dragonflies – as more and more habitats are saved or recreated.

In the meantime, I’m very happy to report that Wildscapes CIC is still looking for more spaces in which to create great crested newt habitats. If you have a space of about 150m2 or more, you could do worse than to contact them.