Jimmy Andrex reviews the pie of the week – this time from William Noble Family Butchers in Wakefield. 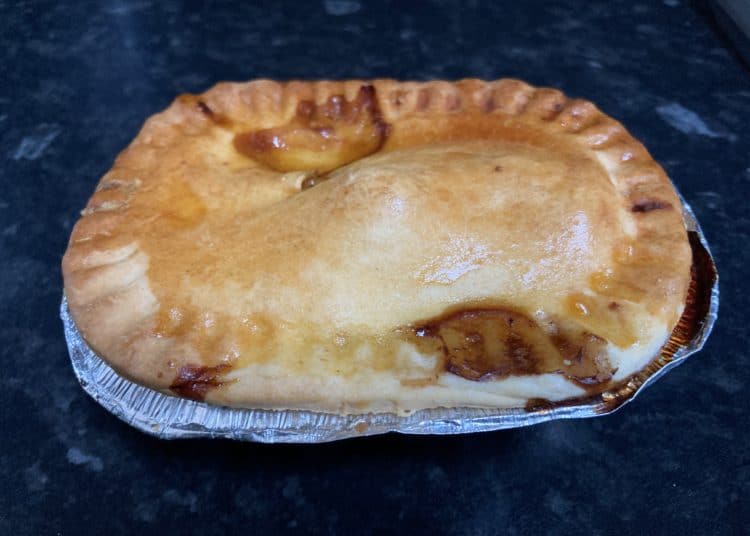 Yes, that’s a an actual place name. Great, isn’t it? Tells you exactly what it is in an effortless, unpretentious way. Of course you, reading this because you’re interested in the finer things of life, will have seen where this is going already and you’re right.

Give yourself a pat on the back in these trying times and reward yourself with a Noble’s pie. While you’re there, you’ll end up buying your meat from someone you know and who, in turn, knows for themselves where all the meat came from. No chance of chewing on also-rans from the 3.30 at Haydock Park with a butcher like Noble’s. All their meat comes from their family farms in Hebden Bridge and South Hiendley.

If you are blessed with the luxury of choice, you can opt for the local butcher as a statement about how you think the world should be. Or, alternatively, you can do it because their products just taste better. A rare win-win in binary times.

Today’s pie came on a particularly depressing day: the pandemic went into its grisly overdrive, Brexit triumphalism spaffed its premature juices onto fawning tabloids, and even idle channel hopping (Mrs Brown’s Boys to La La Land to Jeremy Clarkson, O DEATH WHERE IS THY STING!?) had lost its heady allure.

William Noble Family Butcher (formerly a branch of another well-regarded local butcher, Richmonds), is actually on the corner at Busy Corner. The area gets its name through being a collection of shops that seem to have been there since the repeal of the Corn Laws, half a mile outside Wakefield City Centre on the Barnsley Road. Two butchers, a chemist, a barbers, a bridal shop, a stonemason, a hairdressers, newsagents and a florist (plus the inevitable Tesco Local muscling in like a crime family), mean you never have to bother going into town for essentials if you don’t want.

There’s no cafes and no reason to hang around, so nipping for stuff is the order of the day. Its name isn’t on maps or signs, just the lips of locals – and if you really must go into town, it’s only a ten minute walk.

A Noble’s steak pie is an everyday celebration of wholesome certainty; like a grittier version of The Waltons. They’re freshly made every day, the oven’s in the shop and the smell when they open the door should be regulated by some sort of statute. The bits of meat are clearly steak, not any old scrag – and in a rush, on a cold day, there’s nothing like it.

Did you realise how easy it is to mis-type “pie” as “poem?”

At this point, it’s tempting to get carried away and see a Noble’s pie as some sort of metaphor blah blah blah, but you have to be careful with metaphor. It’s like knives and guns; OK in the right hands and all that. Bandy careless pie-based metaphors around without due care and attention and before you know it the entire country’s screwed over for the sake of abstracts no-one’s thought through or understands: Control, for instance, or Sovereignty or even Large Numbers.

In a world of dizzying, nauseous mutability, a Noble’s Family Butchers’ pie is what it is and (aside from much larger environmental questions about meat-eating in general), we are all enriched by it.