Jimmy Andrex reviews our pie of the week - a mushroom and leek pie from Denby Dale, West Yorkshire. 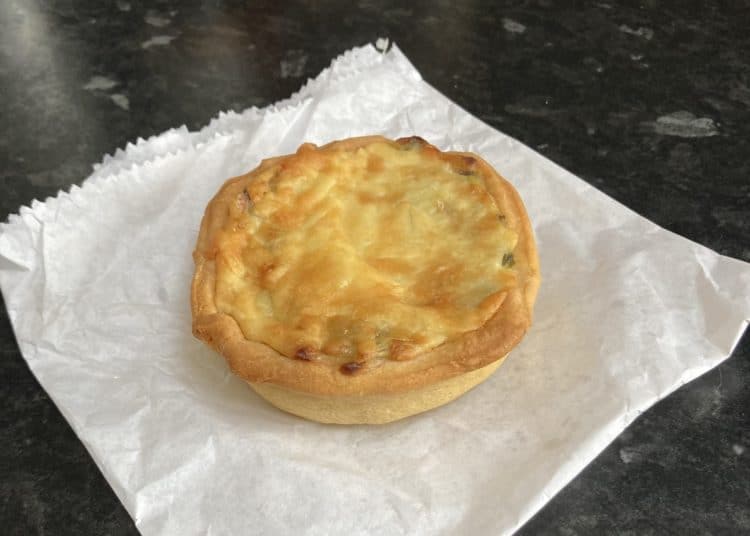 We’re not savages, you know. Though Downing Street wonks imagine THE NORTH as a tundra where gangs of jowly, flat-capped urchins howl at the moon about Brexit and stagger out of our terraced coal sheds to look at the bus when it arrives, we are capable of appreciating an artisan bakery.

This applies all the more when said bakery is in a village made famous by being the place which holds the record for the world’s largest pies. Denby Dale’s first epic pie was baked in 1788 to mark the return to sanity of George III; others celebrated Queen Victoria’s Jubilee and the repeal of the Corn Laws.

It didn’t always go well. One pie made entirely of game, had gone off so badly that a noxious cloud – and, reputedly, a live pheasant – escaped when it was cut open and a number of people were injured in the stampede to escape. Mind you, I’m sure someone would have stumbled out of the pub and tried some, with the old “Just-put-lots-of-chilli-sauce-on-it” gambit.

Denby Dale even boasts a village hall, the appropriately named Pie Hall, which was built with the proceeds of one pie. The last one, in 2000, was basically a huge tureen on a truck with a load of pastry lobbed on. My mother-in-law swore blind it was lovely.

So, on a day when excess deaths in the UK hit their highest level since World War 2, (“he’s done a good job, that Mr Johnson, no-one could have done any better” blah blah blah), I was looking for a tonic and got one – courtesy of a mushroom and leek tart from GG’s Artisan Bakery.

But, I hear you cry, “It’s not a pie! There’s no meat and it’s just not manly enough for a hungry northern male stereotype!”

You know what, reader, whatever you’re thinking, you’re wrong. It’s warm, it’s got a crust and it tastes comforting and fabulous. There’s melted cheese on the top. What sort? Well, call it ignorance or call it apathy but I don’t know and I don’t care. So it’s a pie, right? This planet-saving veggie lark might be alright. I draw the line at celery, mind.

Next door to GG’s is a more conventional sarnie shop which I’m not so keen on, but my lad thinks is fine. If you want a picture of an ideal North, it’s not some backward-looking vision of chip-shops and pie stalls, tower blocks full of call centres or patronising statements about levelling-up; it’s a street where there’s GG’s as well as a more traditional bakery, where you pays your money and you make your choice.

And if you see me in a flat cap you can shoot me.