Jimmy Andrex reviews the pie of the week - this time from Cryer & Stott, at Castleford market. "If you ever had sex better than this pie you’re either a liar or I need to get to know you better. If you ever took drugs better than this pie, you must be on drugs – cheap, bad ones that make you think the traffic in South Elmsall are crocodiles." 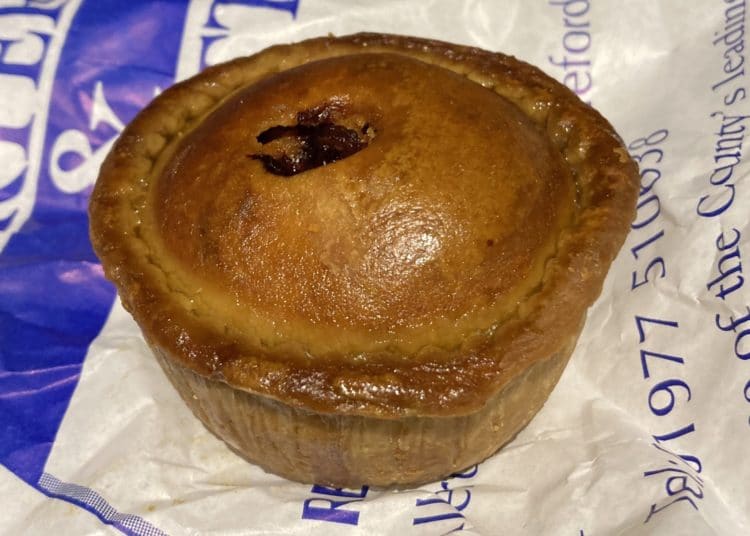 Image by the author

If you ever had sex better than this pie you’re either a liar or I need to get to know you better. If you ever took drugs better than this pie, you must be on drugs – cheap, bad ones that make you think the traffic in South Elmsall are crocodiles. If you ever saw a definitive performance of King Lear, with Anthony Sher as the Fool and Tim Wonnacott off Antiques Roadtrip as Lear that was better than this Cryer & Stott pork pie then I take off my freshly waxed Barbour hat to you and your new-fangled subverted Yorkshire stereotypes.

Lesser pies look like an agency worker fell into the machine without anyone noticing or caring.

Lesser pies have gristly white bits amid a mottled pink that glows suspiciously, like something spotted by a minor actor in a Cold War horror movie just before they scream the last scream of their career.

Lesser pies remind you of that Plumrose chopped pork in a tin, the one your well-meaning distant auntie would give you in the 1970s “as a treat”. Remember? You know, that brand with the stereotypical ‘Oriental’ in the advert who couldn’t pronounce the letters L and R collectly, not that we were racist in those days, oh no, those four hundred Red Indians armed with spears that John Wayne and Montgomery Clift just massacred with repeating rifles were attacking the white man, not defending their village. It all left a taste of metal in your mouth and a bad feeling in your gut.

Kendells achieved a weird 2020 notoriety recently when the owner, Gary Proud, was featured on the front page of the local paper to officially deny a rumour that he was dead. ‘Cas Man Not Dead’ is one of those headlines you tend to notice. My own favourite memory of Kendell Cycles was going in one day in the 1990s to buy a pair of wrap-around cycling sunglasses. Gaz plonked two pairs on the counter:

“These are Rudy Project ones. Forty quid. Miguel Induráin wears these. These others look like ‘em, but they’re seven quid.”

“What’s the difference?” I asked.

The market, even after ten years of austerity that didn’t cure anything except the bacon, has loads of variety. There’s even a model stall that sells Hornby and Airfix – the two unlikeliest but loveliest success stories of 2020 – at very good prices.

This multi award-winning cheese mongers started in 1998 and has become the Barcelona FC of cheese. If you value your sanity, or have any sort of addictive personality, DO NOT even try their Ruby Gold, or your partner may find you in the small hours lying on your back in the middle of the kitchen floor scoffing cheese to satisfy cravings Johnny Depp would wince at. The quality and range is mind (and palate) boggling.

When they briefly had a café on the balcony of the old Wakefield market hall, they did the best coffee Wakefield’s ever had. It’s just not fair. And their pies?

Well, my advice is to remember that one of God’s creatures died so you could eat this, so adopt a reverential attitude and a thankful heart, and don’t visualise arteriosclerosis until afterwards. It’s the only way you won’t go back and have another one straight away.

If meat-eating is bad for the planet, then the least a carnivore can do is enjoy it and be grateful. And while you’re at it, spend some money in some local businesses. Jeff Bezos won’t suffer and you can always take up jogging.