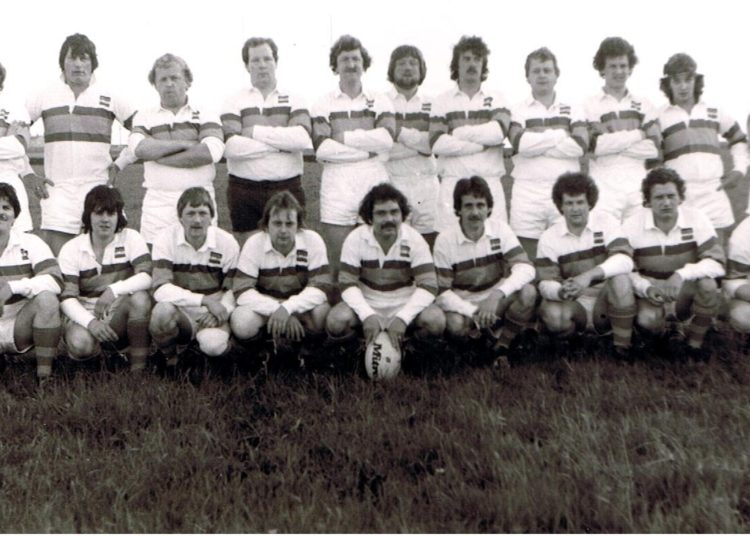 I was a very active lad, running about here and there, getting up to some minor mischief and playing games. One of these was whip and top – a turned wooden top that had to be kept spinning on the floor by whipping it with a leather lace fastened to a stick. Hours of fun. Another entertaining game was the hoop and stick.

Sticks were very popular in those days and proper sticks were always readily available. In my humble opinion, this is why young lads stay in their bedrooms and play computer games: our cleaner, tidier environment has dictated that there are few, if any, proper sticks. All they have now are wimpy twigs that are only good for kindling.

My hoop was an old and very skinny car tyre. One day I was merrily propelling it along the road by Headwall Green using my favourite stick, when I came to the top of Benny Lane, which is a steep lane down the valley. The tyre must have had enough of being beaten and decided to make a run for it.

Down Benny Lane it went, increasing speed all the time and bouncing in the ruts. I couldn’t keep up. Even though I carried out an extensive search, I never saw it again. It could have bounced through one of the bedroom windows of the houses in the bottom of the valley for all I know.

During my youth and adult life, I began to play more organised sports like tennis, badminton, table tennis and squash, when partners were available. I also began to play team sports such as cricket, and for a while football, which I played for Scapegoat Hill football club for one season. I was never good enough for the first team, nor even for the second team really, but they only had two.

Apparently, their ground was the highest football ground in Europe. And didn’t we know it, when the westerly gales were blowing around our nethers, causing chapped thighs and icicles dripping from our noses. Still, it was like having another two players on our side, as the opposition teams hated it.

But except for a period around the 1966 world cup, I have never taken to football. I didn’t like the attitudes – to each other, the opponents, the referee and in the crowds. I find the professional game even worse: disrespect, aggression, cheating in the game and players’ private lives. I can’t watch it any more.

The team sport that became my favourite was rugby league. We had some wonderful and entertaining times together. Cricket teams always provided salmon and cucumber sandwiches and a nice cup of tea, but the rugby clubs went one step further: warm pie and peas washed down with lashings and lashings of lemonade. All very laddish and noisy of course.

The following photo was taken at the Milnsbridge Rugby Club bar. It features “Father’s Mug” – filled with a bottle of Pernod topped up with cider and passed around for everyone’s enjoyment. If it was anyone’s birthday, they were encouraged to drink a yard of ale, all paid for from club funds. What fun we had.

The main photo at the top is of Brook Motors rugby club, which evokes many entertaining memories and one very sad. Three lads on the back row were killed in a car accident in Huddersfield town centre. Clive, one of the lads on the front row was also in the car but luckily survived. He went on to join the army and I believe became a member of one of the army’s special forces.

There was a funny incident involving Clive. While he was recovering from a shoulder injury, he had borrowed my shoulder pads. Worn under the shirt, shoulder pads were soft cushioned canvas stuffed with padding. Extra strong knicker elastic under the arms held them over the point of the shoulder, and adjustable laces held the two parts covering the breastbone.

Clive tucked the ball under his arm and charged at the two forwards standing in his way. There was a crash and a bang and Clive appeared on the other side, with one of the opponents left standing in amazement with the shoulder pads in his hands. He was as surprised as everyone else – except Clive, who just carried on as if nothing was amiss. How this happened without Clive losing his completely undamaged rugby shirt, his ears or even his head will always remain a mystery.

More happy days. The chap on the back row third from the right is wearing the ‘first aid kit’ – a bucket and a wet sponge, which was all we had. If anyone was badly injured, we would drag them to the side so no-one tripped over him.

We also had use of a very large tub of Vaseline to rub around our ears, eyebrows, thighs and groin area. We also had a similar-looking tub of rubbing liniment for knees and troublesome muscles. I was running late one time and I accidentally dipped my hand in the wrong tub, of course thinking it was Vaseline. It wasn’t. It was several days before my wedding tackle recovered from that one, if it ever did of course.

Rugby playing ladies were quite rare in those days, but I’m glad to say it’s much more common now. In fact, I get quite a lot of satisfaction watching their positive and respectful attitude towards their opponents, the referees and their own teammates. This seems to be the case with all ladies’ team sports, including football.

Due to the fact that it was difficult to organise their own training facilities, there was one lady who trained with us. Her name was Rita, salt of the earth type and every bit as tough as the rest of us and tougher than some. Even in training, there are some heavy hits in rugby.

We tried to be gentle with Rita, but she never really appreciated our special care, and she more than made up for it when it was her turn to hit. She wasn’t a particularly big lass, but could certainly hit above her weight, literally I suspect, but I never saw her lose her temper.

There comes a time with all rugby players when a niggling injury takes more than a week to heal and we play with injuries on top of other injuries. When it happened to me, I became a coach for a couple of seasons until work commitments dictated I should give up all together.

During this time, I took up clay pigeon shooting and karate. I also took up fencing with my little brother. He was very good, becoming multiple Yorkshire champion, but he did allow me to win now and again, except when I joined him at his fencing club in ‘that place’ down south, when he wouldn’t fence me at all, just in case he mistakenly let me win again.

Sport has been important to me all my life, and it has, I’m sure helped in ensuring a relatively fit and active old age. I now enjoy walking/hill climbing, of which there are many on the Pennines, ballroom dancing and I’m a founder member of the Bolster Moor Malt Whisky Appreciation Society. Luckily running about is unnecessary in any of these activities and the malt whisky has now taken over where the Vaseline and rubbing liniment left off, however, I have found that this works better internally.