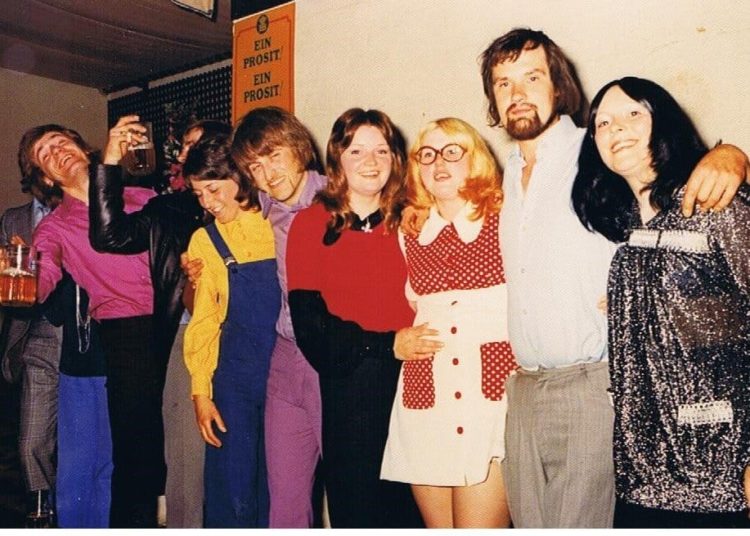 Dancing on the tables at the Huddersfield Bierkeller. We should have gone there instead of Wakefield, as it would have been nearer home. But where’s the fun in that?

True stories from ‘Norky’ who comes from Scapegoat Hill, a small, isolated farming village, high on the Pennines in West Yorkshire. You can catch up on his ramblings so far via his author page. This article is part four of a six-part series on the theme of male immaturity based on Norky’s childhood.

When Moira feels the need to describe what a proper git I have been she relates an incident that happened soon after Rachel was born, 1969/70. I always point out that I was a completely innocent party to other people’s recklessness. I should also point out that Moi is never persuaded by this excuse. If the city of Wakefield is ever mentioned, it’s never long before Moi says, “that reminds me …”

The Wakefield Bierkeller beginning of our adventure

During a visit from an old biking mate called Dave Hill (Pill), who had previously moved to Canada, he suggested that the lads could get together and visit the Wakefield Bierkeller. Bierkellers were fashionable at the time, because; lager was served in one-litre steins and the furniture included very simple long benches and tough trestle tables, on which everyone was encouraged to dance. The fashion didn’t last long but was fun all the same.

I’d been taken in the car belonging to John (Rubber Duck) along with Paul who happens to be the W.A.R.T.S. chief engineer, and the late David Coop (Coot), one of life’s lovely fellas.

Pill had hired an MG Roadster sports car in the hope that it would impress everyone, and his passenger was Colin (Crabby).

We had been having a good time throughout the evening and when it came time to leave we were unaware that there had been some trouble outside and the police were still milling about, one of whom was a dog handler.

Coot, Paul, Rubber Duck and I were strolling towards the car when Rubber Duck decided to give the dog handler some verbal abuse. This came as a big surprise, as Rubber Duck was never usually like that. Within minutes, the police officer had him pinned up against a shop window while trying to keep the dog from separating Rubber Duck from his vitals. We were trying to placate the situation but the officer’s colleagues made sure we couldn’t get close. Our friend was taken to the nearby police station.

Rubber Duck is quite tall and the police dog handler was very short. I will always be amused by the image of the police officer frogmarching Rubber Duck down the road while lifting him onto his tiptoes by his jacket collar, still holding his dog in the other hand while it continued trying to chew on some part of Rubber Duck’s anatomy, making a hell of a racket.

We followed at a discrete distance and asked the desk sergeant if we could have our friend back. He said that John was in for the night. When we asked for the car keys, the request was impolitely declined.

There goes our ride …

At the railway station, we discovered there were no trains to Huddersfield. Our combined pool of money wasn’t enough for a taxi either. So we decided we had no alternative but to walk the 18 miles home.

Unbeknownst to us, while we were investigating our options at the railway station, the police had released Rubber Duck, who’d returned to his car and tried to find us but never thought to look at railway station. He assumed we’d been picked up by some other mates and drove back towards Huddersfield.

In the meantime Pill, with his passenger Crabby, had an accident while entering the main road onto Huddersfield. Apparently, he was still driving in Canada and looked the wrong way.

There were no serious injuries, but Pill knew he’d been drinking and could be in serious trouble. So he pretended to be hurt, at which point Rubber Duck appeared on the scene, freshly released from the police cells. Arrangements were made to take Pill and Crabby to hospital in Rubber Duck’s car, in the hope that this would waste enough time for Pill to sober up.

Coot, Paul and I were merrily oblivious to all this and we were still striding out manfully when, several hours later (approximately four-o-clock in the morning), Rubber Duck drove past my house on his way home from the hospital and noticed a light on. He knocked on the door to make sure I was okay.

Moira answered and said, “Where is he?” Rubber Duck, in his infinite wisdom, assumed she meant Pill, and assumed that she already knew about the accident; and knowing that Moi didn’t like Pill, he worked all this out in a split second and said “he’s dead”. When Moi tells this story there is always a little crescendo just there.

Luckily, Rubber Duck soon realised that he’d said the wrong thing and belatedly checked to see whether I was home. Moi said, “Well, as a matter of fact, you may be surprised to learn that he is not”, or words to that effect. He told Moi the fuller story as he knew it, and quickly vacated the area, I was still half an hour away and merrily oblivious.

I’ve never been allowed to forget it, not that I really want to forget. It’s an amusing story that’s provided many, many, hours of family entertainment and I still maintain that I was a completely innocent party to the whole episode.